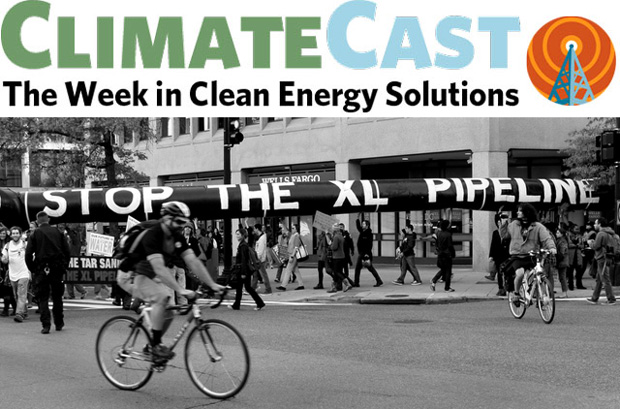 2014 seen as a landmark year for the climate movement

The fall of the curtain on 2014 slowed the news cycle and brought out climate writers’ round-up of a year that was marked by heat waves and an avalanche of climate science. Recurring themes in the annual re-caps included the U.S.-China climate pact, the $10 billion raised for the Green Climate Fund, Obama’s use of the Clean Air Act to limit carbon emissions from power plants, and the falling price of renewables. But the most trenchant year-in-review came from Rebecca Solnit, who hailed climate activists’ unexpected victories and compared fossil fuels prevalence to the obsolete “divine right” of kings. If you read no other round-ups, read hers.

GOP gears up for fossil favors, while CA ratchets carbon down

Republicans prepared to use their new two-house majority in Congress to hold environmental rules up to greater scrutiny and drive the Keystone XL pipeline forward, while Senate Democrats readied a series of amendments to the pipeline bill that would require countervailing investments in renewables and ban the export of Keystone oil. On the opposite coast, state climate action accelerated, with California’s carbon cap program expanding to cover motor fuels as of January 1, and Gov. Jerry Brown using his re-inaugural address to call for the Golden State to get half of its electricity from renewable sources by 2030 and halve its use of petroleum in transportation.

Electric vehicles reached new milestones as 2014 came to an end, with Nissan selling more Leafs in a year than any EV before it, and Tesla Motors announcing an upgraded model that will be able to travel from San Francisco to Los Angeles—400 miles—on a single charge. Despite the Leaf’s popularity, public charging stations in Oregon go begging as EV owners prefer to charge at home. While falling oil prices are trimming the sales of efficient cars and the stock price of their manufacturers, cheap gas would ease the sticker shock of a carbon tax, argues former Treasury Secretary Lawrence Summers.

Curbing the greenhouse impact of the aviation industry was touted last week as an increasingly important avenue of climate action, thanks to figures that show emissions from the aviation sector worldwide total more CO2 than all but six countries. With commercial jets locked into the use of liquid fuels for the foreseeable future, biofuels will play a key role in reducing their climate impact, and industry observers anticipate key advances in the coming year in commercializing advanced biofuels and certifying them for use in aviation—good news for producers hit hard by low fuel prices.

Pope Francis I will issue a formal Church position on climate change in a message to Catholic bishops worldwide, the Vatican announced last week. The pronouncement, to follow his March visit to the typhoon-damaged city of Tacloban, Philippines, will take the form of a 50- to 60-page papal encyclical—a format reserved for stances of importance issued by pontiffs only five times so far this century. Bracing for the Pope’s likely call for climate action, Fox News is already gearing up to discredit the Pope’s scientific credentials, missing the union he is trying to forge between religious faith and scientific inquiry.

Americans prefer solar and wind power to nuclear, coal, or oil, according to polling analyzed by Harvard political scientist Stephen Ansolabehere, but don’t want their monthly utility bills to rise by more than a few dollars. The findings are published in Cheap and Clean: How Americans Think About Energy in the Age of Global Warming (MIT Press). Americans would also rather see the EPA regulate carbon emissions than use a carbon tax or a cap-and-trade system, Ansolabehere told a University of Chicago audience, because they trust that the EPA is concerned with public health—even if the process includes some arcane math on nuclear plants’ impact on climate.

Year-end climate round-ups didn’t stick just to policy, science, and economics—they covered technology, too. 2014 was a year of LEDs going mainstream, driverless cars, a 10 to 20 percent mileage boost for America’s most popular truck, and innovations in smart home energy controls. But smart metering may provide Too Much Information, according to a British study that found it can add to residents’ stress over energy consumption, depending on how the data is shared and used. Ahead in the new year: underwater turbines off the Japanese coast that will tap the power of the Kuroshio Current like so many submarine kites.

Climate developments to watch for in 2015

There’s nothing like a new year to provoke journalists to prognosticate, and climate writers are no exception, universally pointing readers’ attention to the December climate summit in Paris as a crucial crossroads (duh). The fate of Big Coal, oil’s uncertain price trajectory, and new research on the jet stream and glacial melting are all worth watching in 2015. Few project further into the future than Harvard’s Naomi Oreskes, who wrote an imagined historical retrospective as a Chinese historian might see the world in 2393—and called on scientists to relax the 95 percent confidence level as a standard for decision-making to avoid rejecting findings of potentially monumental significance.