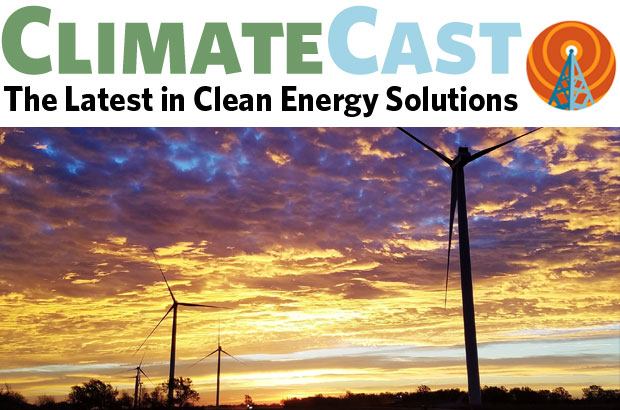 As the climate changes, it’s almost as though each superstorm and drought is the earth itself asking us to change—to transition to a clean energy economy. Thankfully, we’re working on it. Oklahoma, “where the wind comes sweeping down the plains,” will soon be home to one of the largest wind projects in the US, serving more than a million customers in the south. To the east, a wind farm off the coast of Rhode Island will power 70,000 homes, its power bolstered by the pairing of a battery storage system by Tesla. An $853 million solar acquisition deal recently closed, signifying one of the largest clean energy deals ever made. An investor involved noted “the bell has really rung—renewables are a very large asset class for institutional investors.” In other solar news, Tesla completed the first installations of its solar roofs, selling first to Tesla employees to work out any kinks before the product goes to broader market. The Navajo Nation is transitioning to clean energy, closing their coal-fired power plant in 2019 and filling the power gap with solar. And when it comes to clean energy, the corporate world also means business: JP Morgan Chase has committed to going 100% renewable by 2020 and to facilitating $200 billion in clean energy financing.

Oil is trying so hard for a comeback, and President Trump even promised the industry one, but things aren’t working out so far. Goldman Sachs wrote in a research note on refining that global oil demand could peak as early as 2024. TransCanada is still having trouble finding sufficient investor commitments to begin construction on Keystone XL. Even if they do, company officials recently conceded that nearly a decade of protests and regulatory hurdles may doom the project. Even Shell CEO Ben Van Beurden said his next car will be electric! That sounds like a great plan to us -- and the alternative fuels market is ready. Oregon’s low-carbon fuels standard is revving its engine; clean fuels businesses have happily been sharing their stories on how the new program is helping them succeed. US electric car sales also grew 40% this year. Toyota and Mazda will be joining forces to build 300,000 electric vehicles annually, starting in 2021. Production will be based in a US assembly plant and will provide jobs for 4,000 people. And Los Angeles’  transit agency recently committed to converting its entire bus fleet to zero-emissions technology by 2030. This encouraging news, following last edition’s section on the clean car movement, only further solidifies that the time for clean cars has (finally) come.

It’s a race to save the planet. Run faster.

While our transition to renewable energy is happening rapidly, new evidence suggests it needs to happen faster. A new report shows clean energy adoption must must increase 50% by 2030 if states are to meet their ambitious renewable requirements. Even more startlingly, two separate studies, using two completely different scientific methods, recently came to the same conclusion: there’s a 95% chance that our planet is already locked into more than two degrees warming by the century’s end. A new global poll finds that climate change is tied with ISIS as the most feared global security threat. And why wouldn’t that be so? Heat waves, as an example, are creeping toward a deadly heat-humidity threshold, showing that heat waves may soon reach the limits of human survivability -- particularly in places like Southeast Asia.

Congress: The good, the bad and the ugly

In a rare moment of bipartisanship, two Democratic senators dialogued with Republican lawmakers on the future possibility of a national carbon tax. In our last edition we wrote about a federal scientist who blew the whistle on being reassigned after he spoke up about climate change. Now, we’re happy to report that eight senators have called for an investigation to look into his reassignment...and 50 other similar cases like it. But, we can hardly sit back and bask in the good news -- the House of Representatives also just voted to maintain fossil fuel energy research, while voting to slash clean energy investments. The climate denial narrative in Washington continues to run deep; the representative in charge of the House Science Committee is even now arguing that global warming has ‘benefits.’ (He must not subscribe to ClimateCast.)

If you’re one of our Oregon or Washington readers, you probably don’t need us to tell you that yes, summers are getting hotter. One leading Oregon climate scientist recently described how climate change is exacerbating Pacific Northwest heatwaves, while a Seattle-based earth scientist wrote about the growing “visceral” connection between our latest heat wave and climate change. Heat continues to impact the health of fish in the Pacific Northwest, with low steelhead counts expected this year. As smoke from British Columbia wildfires settles in on these already hot days, Oregon and Washington feel the impact through decreased air quality. In fact, Oregon’s air is reported to be among the worst in the nation due to wildfire smoke, stagnant air and blistering heat. In India, millions have lost everything due to flooding; flood waters have submerged villages and washed away crops; at least 130 people have died. Prime Minister Modhi blames climate change. A new study projects climate change will continue to stress marine environments in the US, increasing algae blooms, nitrogen runoff, and dead zones. Climate change will also intensify the effects of El Niño, including heavy rainfall, flooding and severe weather in regions including the Pacific Northwest. Climate change is already creating a crisis across the African continent, making fertile land both desperately needed and scarce.

The new administration: some good, but mostly bad and ugly

A 30-year career official at the EPA has resigned, citing an agency suffering from “the temporary triumph of myth over truth.” States are threatening to sue the EPA should they fail to enforce the Clean Air Act. The new administration has filed a legal petition to pause proceedings in the youth climate lawsuit challenging the administration for not acting on climate. The Interior Secretary and his staff are rolling back environmental regulations on public lands following a widely photographed visit to Western parks, monuments and wilderness where he compared himself to Teddy Roosevelt and claimed “no one loves public lands more than I do.” USDA staff are reportedly being instructed to censor references to climate change in reports and other documents. Finally, the EPA has reached out to the Heartland Institute for help in creating a team to poke holes in evidencepresented by “mainstream climate scientists.” Good luck, guys...

In Brief: Here’s the anti-EV argument you’ll want to be ready for

EcoWatch has provided an edited, slowed down version of a new Koch Brothers anti-EV video to mythbust their claims. We recommend you take a few minutes to arm yourself with the myths and facts so that you can be a champion of the truth!

This month, CREDO has selected our Stand Up to Oil coalition effort as one of the beneficiaries of their monthly charitable giving. We are so honored! But how much we receive depends on votes cast. You can support us by clicking here (you don't need to be a CREDO customer to vote). Thanks!