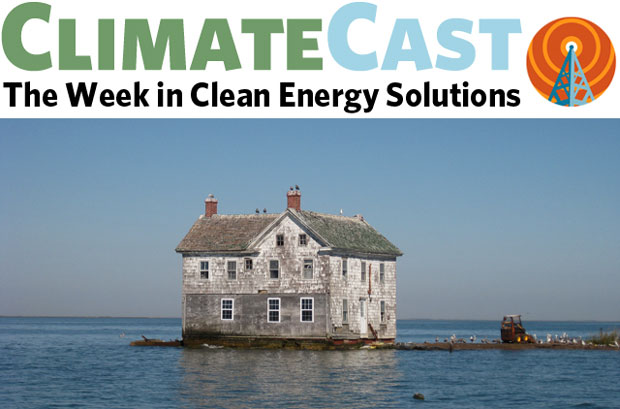 Utilities in southern India last month agreed to buy 1 GW of solar power from a local energy park in an effort to stem serious electricity shortages. The news comes as California announced it has already met its 2017 goal of installing 1.75 GW of rooftop solar, with 1 GW installed last year alone. On the mid-Atlantic US grid, decentralized solar generation grew 30 percent since last year, a rate projected to continue now that the solar tax credit has been extended. One analyst predicts that rooftop solar could actually lead to a decline in mid-Atlantic electricity sales. In contrast, competition in Texas from cheap wind and natural gas power has slowed development of 2 GW in planned solar farms.

A 100-MW battery beat a natural gas plant in an auction to supply southern California with peak power, demonstrating the growing role that energy storage is playing on the grid. In South Australia, the transmission line to Kangaroo Island needs a $50 million replacement; a competing proposal would install 8 MW of wind, 8 MW of solar power, and 3 MW of storage to power the island entirely from local resources, making the cable obsolete. At the household scale, an Australian company unveiled a flow battery with a predicted 20-year lifetime, while German firm Sonnen introduced a battery with built-in software to maximize how much rooftop solar is consumed on-site for regions such as Hawaii that have ended net metering.

Rising sea levels have smashed high tides into a hospital and inundated croplands in Kiribati, an archipelago nation in the South Pacific whose government is making plans to relocate the entire population to higher ground in Fiji. In Chesapeake Bay, the 470 residents of Tangiers Island are bracing for a similar fate, with their land increasingly saturated by rising waters, as the US Army Corps of Engineers ponders whether and how to protect it. A couple of hundred miles to the north, New York City is about to build a multibillion-dollar 10-foot-tall seawall around Lower Manhattan that aims to prevent a re-run of Hurricane Sandy’s flooding. In contrast, it’s a lack of water that killed Bolivia’s Lake Poopó and the fishing culture of the villagers who lived beside it.

Most new German renewable power projects will have to compete with each other at auction, instead of benefitting from generous fixed feed-in tariffs, under reforms the Bundestag passed last week. The tariffs had helped boost Germany’s grid to over 35 percent renewable energy, but attracted criticism over their $25.5 billion annual cost. The feed-in tariff can end, said the German economics minister, because clean energy projects are “no longer young puppies that need to be protected, but quite agile hunting dogs.” The reform’s opponents charged that citizen cooperatives—which own nearly half of the clean power projects built under the country’s Energiewende—would be at a disadvantage compared with large corporate developers; as a result, the reforms were amended to exempt photovoltaic arrays under 750 kW. Japan, too, will shift next year to an auction system for large-scale solar development.

Interest is rising in net-zero buildings

By a margin of four to one, facility managers say they aim to achieve net-zero energy in at least one building under their management, according to a survey of 1,200 building executives in the US, Brazil, Germany, China and India. Even more—82 percent—are looking into “islanding,” in which their buildings could operate independently of the larger grid. The net-zero goal will become a mandate by 2030 for new homes and commercial buildings in Vancouver, BC, if the city council adopts staff recommendations to be discussed this week. In a move to reduce car dependency and increase affordability, the Portland city council appeared last week to back away from requiring parking in transit-oriented apartment buildings.

The Democratic Party’s platform committee agreed last weekend to call for a price on carbon dioxide, methane, and other greenhouse gases, prioritize renewable energy development over natural gas, and adopt the “Keystone Principle” that infrastructure projects should enjoy federal backing only if they don’t make climate change worse. Those victories for the Bernie Sanders contingent did not extend to fracking, however, where Sanders’ call for a nationwide ban lost to Hillary Clinton’s proposal to simply curb the practice’s environmental impacts. On the Republican side, if Donald Trump wins in November, says Politico, cooperation between the US and Mexico on energy projects would be at risk. Speaking of risk, much of Trump’s golf course at Mar a Lago, Florida, could be underwater 210 days a year by 2045 as a result of global warming.

Chinese automaker Hanergy unveiled four solar-powered concept cars this month, with photovoltaic panels on the roof and hood to charge them as they drive. The cars—which can unfold their panels when parked to capture more sunlight, as a satellite does in space—can also be repowered at regular charging stations, and are slated for market in three years. South Korea announced a program to boost EV sales, including the construction of 30,000 charging stations at 4,000 apartment buildings by 2020; a hike in the EV subsidy to $12,100 per car; and cheaper tolls, parking, and insurance for EV owners. In Sweden, EV owners will be able to use one another’s charging stations through a plug-sharing network called Elbnb, a play on Airbnb.

Image: A house built on Holland Island in Chesapeake Bay, now uninhabited because of erosion and sea level rise. Photo by baldeaglebluff, via Flickr.