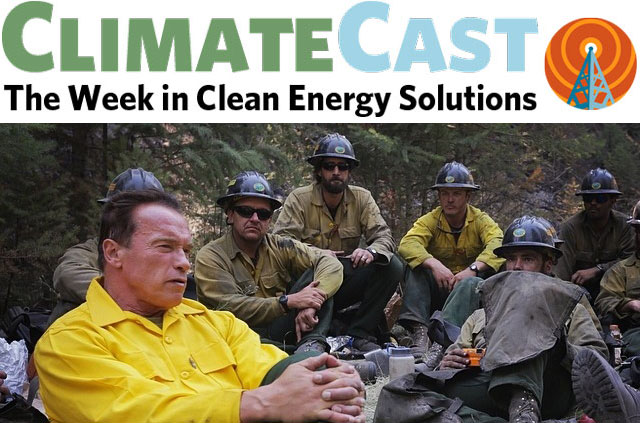 The Intergovernmental Panel on Climate Change (IPCC) found that measures to hold global warming below 2 degrees C would barely reduce economic growth rates worldwide, but that time is running out to ramp up those efforts. Political wrangling kept some controversial bits out of the report, including a menu of ways to apportion responsibility for emissions cuts, which foreshadow the issues that will surface in next year’s climate treaty talks. Nevertheless, the science panel presented a clear choice: the faster the shift toward carbon-free energy, the greater the maneuvering room; the later it starts, the more humanity would have to rely on unproven technologies.

Companies trying to get on right side of climate change

Taking the opposite tack from ExxonMobil’s statement two weeks ago that it saw no barriers to burning any of the carbon in its reserves, Shell Oil joined 90 other firms in calling for the world’s economies to produce zero net carbon emissions by a set timetable. The “Trillion-Ton Communiqué” from the Prince of Wales’ Corporate Leaders Group endorses the IPCC goal of keeping cumulative carbon emissions to less than a trillion metric tons, which scientists agree has the best chance of keeping global warming to less than 2 degrees C.

Sunday’s premiere of the nine-part climate documentary, The Years of Living Dangerously, drew a rash of commentary and reviews. While some highlighted the series’ shrewd use of celebrities to attract viewers, others focused on the producers’ goal of getting past the skepticism with which some Americans view the climate issue, and connecting with actual impacts such as droughts and social upheaval. Series fans can get behind the scenes with one of the producers, or read a critique of the show’s lack of attention to Western consumption habits as a root of our climate challenge.

Harvard University tried to deflect mounting pressure from students and alumni to divest from the fossil fuel industry by agreeing last week to a set of responsible investment principles that would apply to all decisions about the university’s endowment. But that didn’t satisfy nearly 100 faculty members, who sent an open letter to Harvard’s president and administration, rebutting President Drew Faust’s opposition to divestment, and calling on her to take bolder action. Student organizers show no signs of letting up, according to The Nation.

The heads of the International Monetary Fund and the World Bank convened finance ministers from 46 countries on Friday to press them to put a price on carbon. A carbon tax should represent a shift away from taxing investment and labor, said IMF managing director Christine Lagarde. U.N. Secretary-General Ban-Ki Moon joined the gathering to call on finance ministers to work with the private sector to make low-carbon projects more appealing to institutional investors.

Renewables becoming competitive with other sources on grid

As the cost of wind and solar keep dropping, “islands of competitiveness” are emerging where they are the cheapest source of power available to the utility grid, according to speakers at the Bloomberg New Energy Finance conference in New York. For instance, a 70-megawatt solar farm in Chile’s Atacama Desert will sell its electricity on the spot market. Another feedback loop paving the way for renewables: investors’ experience with solar and wind has lowered capital costs to 6 or 7 percent — a crucial boost for renewables, whose cost is almost all in the initial investment.

Residents of the British Columbia harbor town that would be the terminus of the Northern Gateway oil pipeline from Alberta rejected the pipeline in a non-binding referendum Saturday. The vote — by a margin of nearly 3 to 2 — came despite a well-funded campaign by project backers, and the promise of 180 permanent jobs in this town of 8,300. It follows the formal rejection of the pipeline on Friday by the four clans of the Yinka Dine, whose territory covers a quarter of the pipeline’s proposed route.

Each state in the union could get all its energy from wind, water, and solar, according to a landmark study spearheaded by Stanford engineering professor Mark Jacobsen, following up on research he’d released earlier for California, New York, and Washington. The plans from The Solutions Project show how many jobs would be created, how deeply energy bills would be cut, and how much would be saved in health costs by making this transition. So far, infographics of the proposed energy sources and benefits are available for each of the 50 states, with a more detailed write-up on Jacobsen’s website for the first three states analyzed.

California issued the first carbon offset credits for a forest protection project since its greenhouse gas cap-and-trade program went into effect. The Yurok Tribe received credits for keeping more than 800,000 tons of carbon dioxide out of the air, in exchange for committing to a century’s improved forest management on 8,000 acres of tribal land on the state’s north coast. These offsets have been trading around $10 per ton, a dollar less than the carbon allowances auctioned by the state, but power companies and other regulated entities may only use offsets to satisfy up to 8 percent of their obligations under the law.

Decentralized solar energy projects need streamlined financing to break through to the next level of scale, according to Rocky Mountain Institute consultant Dan Self. While a handful of artisanal funding schemes have arisen to raise capital for rooftop solar installations, such as solar bonds and crowdfunding, Self argues that larger-scale breakthroughs will come when lenders will consider the stream of future solar power as a part of the system’s value, or when a rooftop system is considered as part of a home’s appraisal and mortgage collateral.