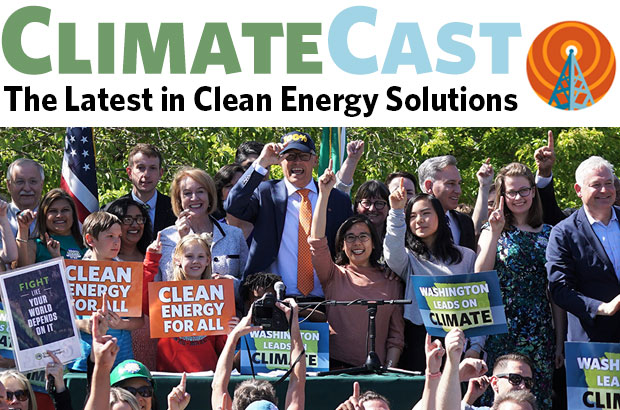 Washington Governor Jay Inslee has signed a historic measure making Washington one of only five states to commit to carbon-free electricity by 2045. The bill comes in a package of climate action creating conservation standards for energy use in large new buildings, new efficiency standards for appliances, and phase out of hydrofluorocarbons (a super pollutant used in air conditioners, refrigerators and other appliances.) For a full roundup of Washington’s recent climate progress, check out our recent blog post here. Governor Jay Inslee also cited the climate crisis as his reason for recently pulling support for two fracked gas projects in Western Washington. One project would turn convert fracked gas into methanol, the other would produce transportation fuel for the maritime industry.

In Oregon, lawmakers released the final version of HB 2020, the Clean Energy Jobs bill. The proposed law would create an economy-wide price and cap on climate pollution emitted by top polluters in the state. The bill is expected to receive a committee vote this week. Oregon DEQ denied a water quality permit that was needed for the Jordan Cove LNG export terminal to move forward, stating “DEQ does not have a reasonable assurance that the construction and authorization of the project will comply with applicable Oregon water quality standards.” While the company may reapply, this is considered a major environmental victory.

US electric vehicle use and infrastructure: going and growing

The City of Los Angeles adopted an aggressive sustainability plan that calls for massive electrification of its transportation sector. Mayor Garcetti announced new goals within the plan to ensure that by the mid-2030s, 80% of all cars run on electricity or zero-emission fuel, and that drivers travel 2,000 fewer miles by car each year than they do currently. In Seattle, Mayor Durkan championed the passage of a new city measure requiring new developments with parking facilities to include electric vehicle charging infrastructure. Statewide, Washington State legislators also voted to reinstate a lapsed sales tax break for EV buyers. In Oregon, Washington County (the state’s second most populated county) celebrated the opening of a new fast charging station capable of charging up to six vehicles at a time. And EVgo, the country's largest network of fast charging stations, announced it is now getting all of its electricity from clean energy sources.

Americans want (and are getting) a clean energy future

The number of solar installations in the U.S. now exceeds two million; and while that milestone may have taken 40 years to achieve, it is expected that number will double within the next five years. An industry noted that the “2020s will be the decade that solar becomes the dominant new form of energy generation." The U.S. renewable energy sector passed an important milestone: in April, renewables generated more electricity than coal. And now that a commitment to clean electricity is the law of the land  in Washington State, one in five Americans officially live in places committed to 100 percent clean power.

States aren’t waiting for permission to move towards their own clean energy futures. New Jersey closed one of its last coal-fired power plants, and may use the site for wind or solar power. Texas has officially built more wind projects than any other state. Montana is working on several major solar projects -- including a 150-acre solar farm in Billings that will power nearly 5,000 homes. And Vermont is incentivizing developers to put solar farms on otherwise undesirable properties, like landfills, sandpits and brownfields. The strategy is working; over 100 applications have been submitted by developers hoping to take advantage of the program. Oregon has approved an energy storage project to build a new reservoir system that will store electricity from the grid. This kind of grid storage is widely seen as necessary to compliment clean energy projects (like wind and solar) that don’t continuously produce electricity.

Forecasters predict another devastating wildfire season this year. Conditions in the American West are dry and hot, and snowpack is alarmingly low. These conditions have led to earlier and more intense wildfire seasons, and experts predict these conditions will yield another bad fire year. Farmers are rapidly working to adapt their crops to the realities of climate change, including warmer temperatures, more invasive pests, erratic weather and earlier growing seasons. 11 everyday foods, from apples to popcorn, are already being impacted by climate change. These costly adaptation efforts are occurring at the same time as U.S. farmers in the midwest scramble to recover from the “bomb cyclone” that devastated agricultural land this spring. It’s estimated that damage from the bomb cyclone could cost farmers of $3 billion. Based on these costly climate impacts, insurance actuaries have ranked climate change as a higher risk than cyber damages, financial instability, and terrorism.

Virginia Governor Northam chose not to veto language in the state’s budget that blocks Virginia from joining the Regional Greenhouse Gas Initiative, a multi-state program that caps and prices carbon from the electricity sector. President Trump’s tax breaks have proven to be especially lucrative for big polluters; a new report from the Institute on Taxation and Economic Policy shows that some of the country’s biggest polluters paid $0 in taxes last year. And a new UN study shows that up to one million species are at risk of becoming extinct unless urgent action is taken to reverse the loss of plants, insects and other animals on which we depend for a stable food chain and climate. Just days after a draft of the study was leaked, Secretary of State Mike Pompeo stated that the Arctic’s rapidly shrinking levels of sea ice present new opportunities for trade and the discovery of “untapped resources” -- including undiscovered oil and undiscovered gas. All of these actions come in the face of the latest figures on climate pollution: the amount of carbon dioxide in the planet’s atmosphere averaged a record high of 413.52 parts per million in April.

In brief: For cities, bike networks are a free-wheeling climate solution