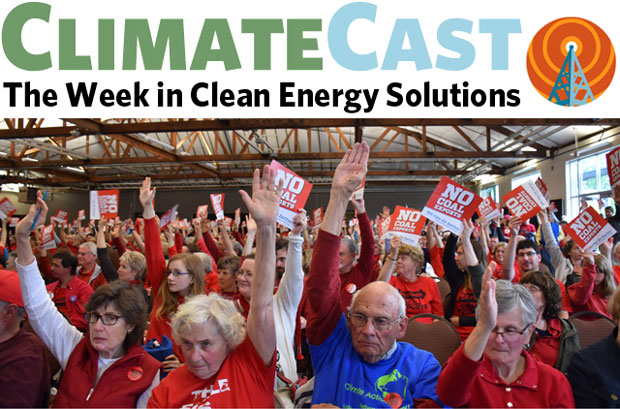 The last surviving coal export terminal proposed for Oregon and Washington was grilled at two public hearings last week, as red-shirted opponents voiced their opposition to the Longview project. Arch Coal, the bankrupt part-owner of the project, handed over its 38 percent share to partner Lighthouse Resources, writing off the $60 million it had sunk into the project. Underscoring coal’s falling fortunes, Talen Energy, which runs the Colstrip coal power plant in Montana, gave its required two years’ notice to plant owners to find a new operator. Coal’s share of US electricity generation fell to 23 percent in March, well below gas’s 34 percent and barely ahead of renewables’ 19 percent.

Exxon Mobil beat back six climate-related proxy resolutions at its annual shareholder meeting last week, including proposals that would have seated a climate expert on the board of directors, required the company to disclose climate policies’ impact on its profitability, and curbed oil exploration to return more cash to stockholders. CEO Rex Tillerson dismissed the concerns, scoffing, “Just saying ‘turn the taps off’ is not acceptable to humanity.” The predictable failure of the resolutions revived the debate about whether shareholder engagement or divestment is the better approach. Exxon came under renewed fire with new revelations: in the 1960s and ’70s, it researched, patented, and then quashed technologies to reduce automobiles’ climate impact; and within weeks of George W. Bush’s 2001 inauguration, it muzzled federal discussion of climate issues.

Electrification comes for cars and buses

It isn’t news that electric vehicles, car-sharing, and self-driving cars could each be disruptive technologies, but all three combined could have truly revolutionary impact, argues Vox’s Timothy Lee. At least 10 partnerships between tech and auto firms have resulted, as companies try to stay atop this rolling log. In mass transit, Proterra has racked up $100 million in back orders for battery-electric buses like those recently ordered by King County Metro. The company abandoned its fuel-cell models as battery prices fell, and is offering innovative terms under which customers can buy the bus but lease the battery, ameliorating uncertainties about how durable the technology will turn out to be.

Insurance giant Lloyd’s of London criticized the US federal program that subsidizes flood insurance in low-lying areas, saying that it encourages irresponsible construction. Rising sea level affects the Everglades and south Florida’s drinking water supply, as salt water can percolate through the porous limestone underlying the reserve, contaminating the aquifer and destabilizing the swampland. In Chicago, too, the warming climate is causing trouble from rising waters, as intense rain events make sewer lines back up into basements.

The falling price of solar power is luring homeowners away from SolarCity’s leasing model as solar loans become more available. Leases accounted for 72 percent of new residential rooftop solar in 2014, a figure projected to drop to 48 percent next year. In Germany, PV installations slowed when the feed-in tariff for solar power was cut in 2013, but are rising now in the aftermath of auctions for new solar supply—which also cut average solar prices below 9 US cents per kilowatt-hour. Maryland’s governor confounded expectations by vetoing a bill that would have raised the state RPS to 25 percent by 2020, up from 20 percent by 2022. However, most new solar power this year is expected to go beyond RPS requirements, as large corporate customers demand more renewable electricity.

Presumptive Republican nominee Donald Trump announced a set of energy policies last week that amounted to a pastiche of looser regulation, increased fossil-fuel extraction, and climate inaction common to other GOP politicians. His trademark bombastic delivery included a number of creative but improbable promises, such as a proposal that the federal government approve the Keystone XL pipeline so long as developer TransCanada shares profits with the feds—a condition that TransCanada immediately rejected. The ill-informed candidate vowed to restore coal’s luster while simultaneously increasing fracking, the very technology that enabled natural gas to outcompete coal for electricity generation. Not too surprising, from a candidate who asked in a recent meeting, “What’s LNG?”

California regulators last week allowed Southern California Edison to accelerate plans to add battery storage to its local grid, as a way of adjusting to the loss of the crippled Aliso Canyon gas storage field. In Hawaii, regulators last December lowered the price of solar power fed back onto the grid to roughly the utility’s wholesale cost of electricity, but the utility nevertheless received a flood of applications under the new tariff that is on track to fill the new quota by summer—leaving solar-plus-storage as the only option for prospective new PV customers. No wonder the Department of Energy is offering $25 million in grants to make solar power dispatchable. German firms are trying a different tack, soaking up cheap electricity on the spot market to store energy for district heating.