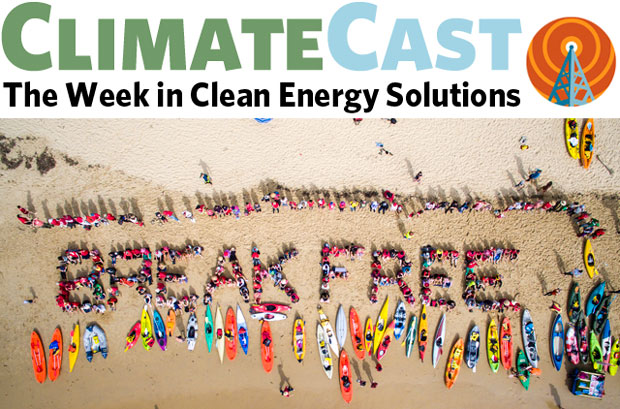 Oil and natural gas producers will have to control methane leaks from their new and modified wells, according to standards that the US EPA finalized last week. The rules, which also call on industry to report comprehensively on leaks from existing infrastructure, are the nation’s first limits on methane pollution, representing a down payment on the Obama administration’s pledge to cut methane releases 40 to 45 percent by 2025. The agency estimates that by 2018, the rules will apply to a quarter of US oil and gas facilities. Oil and gas are just the tip of the melting iceberg: livestock, landfills, and coal mining are responsible for about two-thirds of the nation’s methane emissions.

More than 50 people were arrested last weekend for blocking a rail line to Washington oil refineries as part of the “Break Free” wave of anti-fossil-fuel demonstrations organized by 350.org. The protests included an amphibious rally against Kinder Morgan’s proposed expansion of its Trans Mountain pipeline near Vancouver and a blockade of Australia’s biggest coal port, among 20 actions stretching across six continents. The protests came during a dark week for the oil industry: several large oil companies relinquished over $2 billion in offshore Arctic drilling leases; the Bill & Melinda Gates Foundation disclosed that it sold its $187 million holding in BP; and oil bankruptcies continued despite an uptick in the price of crude.

The future isn’t what you project, it’s what you evoke

The release of the Energy Information Administration’s International Energy Outlook last week rekindled a debate over the agency’s backward-looking efforts to forecast energy usage. Although the EIA says its outlook isn’t a prediction but rather a “business as usual” scenario, it describes just a single path and uses the definite future tense, thus undercutting that objective. In contrast, Ontario’s provincial cabinet debated a Climate Change Action Plan that takes up Bertolt Brecht’s challenge to use art as a hammer to shape reality and contemplates a Can$7 billion program that would make all new buildings fossil-free by 2030, offer hefty incentives to buy electric vehicles, and heat buildings with geothermal energy and heat pumps instead of natural gas.

Solar thermal power is seeking greener pastures in China, where the government aims to develop 10 GW of solar thermal plants by 2020, and is being touted in Australia as a replacement for retiring coal plants. In the US, where solar PV has taken off in some regions, a new report finds that the policy climate in 10 states has held back rooftop solar compared with what its solar potential would suggest. Conversely, a deeper look at last week’s 3-cent-per-kWh bid for solar power in Dubai identifies a handful of site-specific factors that likely contributed to the astonishingly inexpensive price. Meanwhile 60 US firms formed a renewable electricity buyers’ alliance to dismantle barriers to sourcing clean energy, and SolarCity has rolled out an initiative to develop PV for utilities, including energy storage and other grid services.

Global temperatures last month were warmer than any April on record, marking the fourth record-breaking month in a row and setting 2016 on course to claim the title of hottest calendar year. This trend was captured memorably by a British climate scientist, whose animated GIF of upward-spiraling temperatures went viral last week. Impacts from this overheating will endanger 1.3 billion people and put $158 trillion in assets at risk, says a new World Bank assessment. San Francisco Bay Area voters will decide next month whether to tax property owners $12 a year, partly to prepare for sea-level rise, but it isn’t a slam-dunk. Even lawmakers from low-lying US congressional districts are not united to act on climate, despite the threat of flooding to their constituents.

Renewable electricity has cut US carbon emissions more than the rise in natural gas generation, according to a series debunking clean energy myths. The series also questions the common perception that renewable energy costs more than fossil, and that the variability of solar and wind power poses a problem for the grid. On Maui, headed for a 100 percent renewable mandate by 2045, wind farms have come to accept curtailment during times of peak generation as a necessary but acceptable evil. Back on the mainland, integrating the balkanized Western grid into a single market would make room for more clean power—as would long-overdue investments in electricity infrastructure.

The energy adviser to presumptive Republican nominee Donald Trump paid lip service to reducing carbon emissions in an interview last week, but offered proposals unlikely to meet the challenge, such as replacing President Obama’s Clean Power Plan with a modest carbon tax. The mismatch wasn’t surprising, given his background as a reliable advocate for fossil fuels. Meanwhile, Hillary Clinton’s climate proposals—which won her no love in West Virginia’s coal country despite $30 billion in transition funding for displaced workers—got a detailed review, which noted that they say little about fracking or public-land drilling and mining. Climate issues represent the starkest divide between supporters of the two candidates, leading the Washington Post’s Chris Mooney to suggest that climate policy could actually affect the outcome of November’s election.