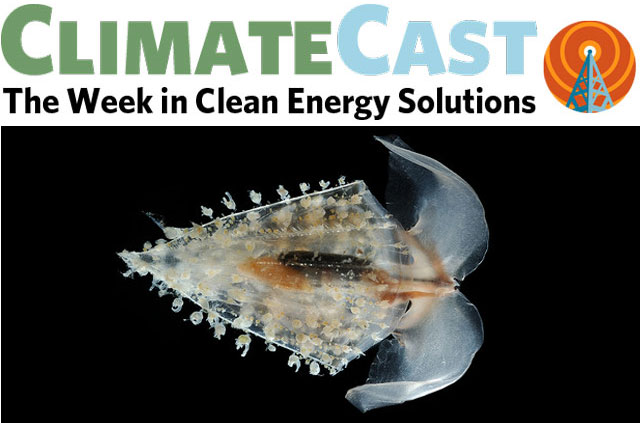 Fossil-fuel firms face a significant risk of losses as alternative energy sources become more competitive—and even greater risk if countries adopt climate-friendly policies to discourage carbon pollution—according to a new report from a European investment house. The risk, particularly for petroleum firms, is that some of the reserves on their books will be expensive to extract. As renewables and electrified transport become cheaper, it will be harder for those remote reserves to compete. These findings bolster the argument for divestment from the carbon sector, which would reduce investors’ exposure to that risk of stranded assets.

Washington Gov. Jay Inslee last week announced a stepped-up program to tackle climate issues, naming a broad-based 21-person task force to design a system that would put a price on carbon pollution emitted in the state. The plan, which would rely on a market-based mechanism such as a carbon tax or cap-and-trade program, is to be presented to the state Legislature next year. Other elements of the governor’s plan include a shift away from out-of-state, coal-fired electricity, heightened energy efficiency standards, and a move to lower-carbon transportation.

With distributed electricity generation and storage threatening electric utilities’ long-standing business model, New York has begun to fundamentally restructure the way utilities serve their customers. Instead of just delivering kilowatt-hours, utilities would choreograph the power provided by thousands of decentralized suppliers under a framework sketched out in New York’s Public Service Commission proposal, Reforming the Energy Vision. This new approach would enable utility customers to be paid for supplying electricity back to the grid from battery storage, or to respond to real-time signals and dial back their demand when needed, and would make it easier to integrate intermittent renewable supplies into the grid.

Maryland’s Montgomery County, just north of the nation’s capital, became the first county in the U.S. to pass a building energy benchmarking law, requiring annual tracking and reporting of energy use in large commercial buildings. Benchmarking laws bring energy efficiency opportunities to the attention of building owners, managers, tenants, potential buyers, and city officials by highlighting energy consumption and comparing it to past performance or energy use in comparable buildings. These requirements, which cover 5.8 billion square feet of floor space in nine cities elsewhere in the U.S., cast a wider net than building codes because they apply to existing real estate, not just buildings under construction or renovation.

Two new developments herald the possibility of airline travel with a drastically reduced carbon footprint. British Airways aims to power flights between London and New York with fuel made from garbage, using existing technologies to transform municipal solid waste into enough fuel to replace 2 percent of British Airways’ consumption at Heathrow Airport by 2017. In France, the piloting of a two-seater, electric-powered aircraft holds promise for eventual development of a hybrid passenger jet. French plane-maker Airbus plans to build on this trial run to design an 80-seat hybrid plane for short flights between cities.

El Hierro in the Canary Islands is about to become the first island in the world to get all of its electricity from wind and water power. An 11.5-megawatt wind farm will supply all the power for this isle of 10,000 people. When demand is lower than what’s being generated, the excess will pump water into a high reservoir, whence it will be piped downhill to produce electricity when needed. In the Pacific, Hawaii has the highest rate of rooftop solar power of any U.S. state, with 10 percent of customers generating some of their own power, spurred on by 35-cent-per-kilowatt-hour rates for petroleum-fueled utility electricity.

The shells on tiny floating sea snails called pteropods off the Pacific Northwest coast are being weakened by acid stemming from carbon pollution in the air, according to a scientific paper published last week. Though the effects on these tiny zooplankton have been observed in the laboratory, this was the first time they were documented in the wild. Rising carbon dioxide levels in the atmosphere have already made the oceans 30 percent more acidic than in pre-industrial times. As a result, rates of severe shell damage have doubled compared to natural background rates, and are expected to triple by mid-century.

A Supreme Court ruling last week bodes ill for the coal industry in its battles against climate regulation. The court upheld rules that require polluters to curb their emissions as part of a strategy to help down-wind states meet air quality criteria. Politico called it “another body blow to the coal industry,” and it vindicates a principle that the Obama administration will use in regulating carbon emissions from coal plants: effects beyond state borders are relevant when the EPA sets limits on what can come out the country’s smokestacks.

Offshore pilot projects to be announced

Offshore wind power in the U.S. is poised to dip a toe in the water this month, when the Department of Energy selects three pilot projects that will receive up to $47 million in federal seed money toward actual construction. The winning projects would become the first commercial offshore wind operations in the country. One contender, Principle Power, would install five floating 6-megawatt turbines off Coos Bay, Oregon. Federal support has been important to land-based wind farms, too, whose fortunes have fluctuated with the off-again, on-again federal Production Tax Credit of 2.3 cents per kilowatt-hour over a project’s first decade in service.

The White House will release a new National Climate Assessment this week warning in unambiguous terms that the climate is already changing as a result of carbon emissions. The report—a country-level counterpart to the U.N.’s Intergovernmental Panel on Climate Change report—cites an increase in U.S. average temperature of 0.8 degrees C (1.5 Fahrenheit) since 1895. Although the report doesn’t prescribe what should be done to minimize the extent or the impact of climate change, it does lay out the likely consequences of possible courses of action.