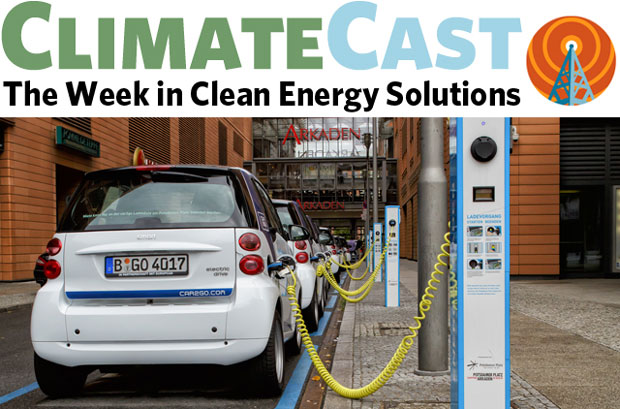 Another long-distance fossil fuel project evaporated last week when Hawaiian regulators rejected NextEra’s plan to acquire the Hawaiian Electric Company, and with it the rationale for importing LNG (liquefied natural gas) from British Columbia. Repowering generating stations to run on natural gas was a key pillar of NextEra’s plans, but the idea faced a skeptical reception in light of Hawaii’s mandate to be 100 percent renewably powered by 2045. The crumbling LNG plan also chilled the chances that BC’s ruling Liberal Party would fulfill its campaign promise to drive the province’s economy with LNG exports, which it sold to voters under the now-ironic slogan, “It’s no fantasy.” In Vancouver, WA, the city council voted to ban new oil facilities, while the Oakland, CA council finalized its rejection of a coal export terminal.

Diplomats in Vienna last weekend reached a tentative agreement to revise the treaty banning ozone-destroying refrigerants so that the substitute chemicals don’t contribute to global warming. The 1987 pact phased out chlorofluorocarbons (CFCs), which were tearing a hole in the ozone layer, but replaced them with hydrofluorocarbons (HFCs), whose continued use would add another half-degree C to global average temperatures by the end of this century. The agreement, to be finalized in Rwanda this October, would phase in climate-safe refrigerants, beginning with a freeze that starts in five to 15 years, and provide aid for poorer countries to reach that goal.

The Democratic convention opened Monday in Philadelphia, poised to endorse a platform that calls for a “national mobilization...on a scale not seen since World War II” to resolve the climate crisis. The party’s shift is not in the platform alone: During the 2012 campaign, President Obama proudly claimed to have increased US oil and gas production, but later rejected the Keystone XL pipeline. This year, Hillary Clinton came out against fracking, offshore oil drilling, and fossil fuel development on public land. Her vice-presidential pick, Virginia Sen. Tim Kaine, garnered mixed reviews for his climate stances, having backed renewable energy and opposed Keystone, but supported a new coal plant and offshore drilling—which may explain why he won praise from both environmental and fossil fuel interests.

Battery storage systems already provide a 13 percent rate of return for Kentucky businesses because they face a $19 per kilowatt charge for their peak demand; in four other states, the payback is over 10 percent. It isn’t just about the cash economics: replacing peaker plants with energy storage reduces urban air pollution, according to a new study in Energy Policy. The old-school technique of pumped hydro—lifting water when power is plentiful, and running it through turbines when the power is needed—is gaining in popularity; developers are seeking approval for 18 GW of pumped storage in the US, on top of the 23 GW already installed.

CAFE standards to fall short of forecasts, but EVs charge ahead

A new federal report projects that average new car fuel economy will miss the 54.5-mpg target set for 2025 by 2 to 4 mpg, largely because consumers are opting for larger cars than previously expected. Electric vehicles got a boost last week when the Obama administration offered $4.5 billion in loan guarantees to establish new charging stations and vowed to design a national network of fast-charging stations. Locally, Seattle announced that next year it will install 20 public fast chargers and several hundred home chargers around the city. With 20 hydrogen filling stations operating in California and another 30 due to open by the end of 2017, fuel-cell vehicles have been slow to take off.

Better together: the case for aggregation

SolarCity is preparing to enter the Texas market, even though the Lone Star State does not allow net metering, usually a key element in its customers’ revenue projections. Instead, the firm has partnered with an aggregator, which can forecast how much excess rooftop generation will flow onto the grid and bid it into the market. Aggregation is at the heart of another market mechanism—distributed energy resources—which is beginning to replace individual demand response arrangements with utilities, and which Pacific Gas & Electric is testing with smart inverters on rooftop solar, and batteries that it can use to relieve excess load at overtaxed substations. Community solar projects in Minnesota will now be compensated according to a “value of solar” formula, which takes into account not only the avoided cost of wholesale power, but also the health and environmental benefits and reductions in grid congestion.

India faces challenges in reaching its goal of 100 GW of solar power by 2022, although 7 GW are already installed and 20 GW more are in the pipeline. Agricultural power is subsidized, making solar seem expensive by comparison, and some 20 percent of utility power is stolen en route to the end user. On the other hand, rooftop solar is a good match for the country’s DIY attitude, the government has sold $15 billion in bonds to help debt-ridden utilities invest in grid infrastructure, and Prime Minister Modi has enlisted major Indian fossil-fuel firms to develop clean energy. In South Africa, a company is developing three solar microgrids, heedless of Bill Gates’ pronouncement last week in Pretoria that solar energy is not the clean energy solution for Africa.

Image: Electric cars lined up to charge on Potsdamer Platz in Berlin. Photo by avda-foto via Flickr.