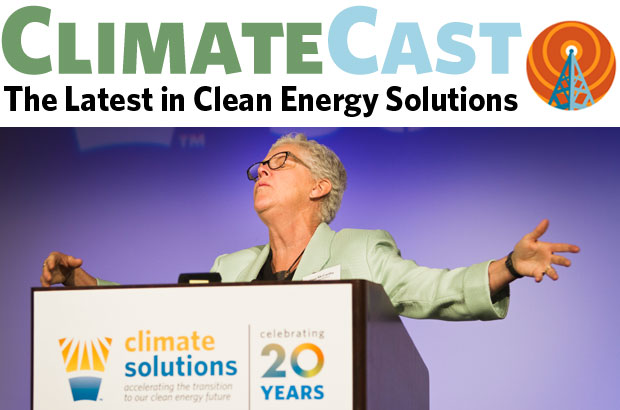 Cities, counties and countries are committing to 100 percent clean energy

Costa Rica made headlines across the globe when the county’s new president vowed to make Costa Rica “among the first countries in the world, if not the first," to fully end the use of fossil fuels. Costa Rica already generates 99 percent of its energy from renewable sources. Over 70 US cities and counties have also committed to transition to 100 percent clean energy, while six US cities are fully powered by renewable energy. Most recently, city leaders in Bellingham, Washington adopted a resolution committing the city to transition to 100 percent clean energy, Bellingham is the second Washington city to make such a commitment, after Edmonds. A new campaign, 100% Clean for PNW, highlights work to hasten a just and complete transition to clean energy throughout the Pacific Northwest, and provides businesses and individuals with ideas for how to move themselves toward 100 percent clean energy.

West Coast leading the fight to mitigate and adapt

Rooftop solar is already more common in California than anywhere else in the country, and it’s about to become even more prevalent. The state adopted a landmark policy requiring most new houses and apartments to be built with rooftop solar installations. The policy is projected to add about $30 per month to a typical monthly mortgage payment, but will save that same household $80 per month in energy costs, resulting in an average monthly savings of $50 per month. The new mandate is expected to boost solar sales by 14 percent over a four-year time frame. This new policy is only one part of California’s aggressive efforts to reduce emissions and transition to a clean energy economy. California’s move is one indication that West Coast states and provinces are ready to lead the rest of the continent on clean energy. Washington State’s King County just became the latest local government to sue major oil companies over their role in downplaying and discrediting scientific warnings about climate change.

Getting stricter on emissions

A coalition in Washington has launched a ballot initiative to price carbon pollution in the state. Governor Jay Inslee supports the proposal. The initiative would place a $15 per ton fee on carbon emissions starting in 2020, increasing $2 each year until greenhouse gas reduction goals are met. Thanks to a recent decision, Washington state regulators will now require utilities to factor in the social costs of carbon. These calculations would be used not to increase rates, but to help justify and hasten existing plans to transition off of out of state coal-fired power. The European Union—the third largest emitter in the world—has announced its own plan to cut emissions to zero by 2050. This goal already has the support of the European Parliament. The State of New York is currently reviewing newly proposed regulations that would limit the amount of CO2 existing power plants can emit. These regulations would help the state achieve its pledge to phase out coal by 2020 while still maintaining reliable and affordable power, and help the state achieve its aggressive decarbonization goals overall.

As more renewable projects are approved, more jobs are needed to bring those projects to fruition. The renewable sector helped create more than 500,000 jobs in the last year alone, a five percent increase from the previous year. A new report shows that global renewable jobs also surpassed 10 million for the first time ever. Solar leads the charge, with 3.4 million jobs—that’s twice the number of jobs in the coal industry. More schools, even ones in oil country, are also now offering renewable energy degrees as demand for workers continues to grow. The writing is on the chalkboard: renewables are here to stay.

In the East and Middle East, renewables reign

Last year, for the first time ever, India added more energy capacity from renewables than from fossil fuel sources like coal. This is part of India’s plan to promote renewable power and achieve increasingly aggressive renewable energy targets. Taiwan just solidified its place as Asia’s number two offshore wind market, behind China, after announcing its first offshore wind allocation last month. This move offers not only an economic boost for Taiwan (the country has its own offshore wind supply chain) but also opens the door to a whole new revenue stream for international renewable companies. And the World Resources Institute finds that switching from fossil fuel to solar power could help Middle Eastern and North African countries cope with water scarcity. Water is often used to help cooling fossil-fuel power plants; powering one 60-watt incandescent light bulb for 12 hours over one a year can consume 3,000 to 6,000 gallons of water, according to the U.S.-based Virginia Water Resources Research Center. Solar panels, however, require no water to install or maintain.

For manufacturing, it’s no longer business as usual

Aluminum is one of the world’s most common materials, and is used to make everything from cars to machinery to packaging, and more. Despite its use in a host of modern applications, aluminum’s manufacture relies on processes that have hardly changed at all since the industrial revolution. But now, a new technology will dramatically reduce greenhouse gases generated as a result of aluminum’s production process. In Canada alone, where the new technology is first being rolled out, the new process will cut greenhouse gases to the equivalent to taking about 1.8 million vehicles off the road, and reduce operating costs by about 15 percent too. Similarly in Sweden, a new pilot steel manufacturing facility is under construction -- it would only emit water vapor, instead of carbon dioxide. If successful, the new type of construction could completely “revolutionize steelmaking”, according to the facility’s CEO.

As Puerto Rico still works to recover from the devastation of Hurricane Maria, new forecasts emerge predicting that 2018’s hurricane season may be even worse than the terrifying season experienced last year. The peak season for Atlantic storms begins June 1, and is projected to to spur as many as 18 storms. And an increasing number of “mega rain” events are being documented in the American Midwest. Mega rain events are classified as storms where the center of the storm drops more than eight inches of rain. Such increased precipitation brings unpredictable flooding, including dangerous flash floods. While the Midwest experiences too much rain, the West is beginning to worry there won’t be enough water to go around. Western snowpack is dismal, and officials are already urging some states to finalize drought contingency plans. Low snowpack isn’t the only water impact being felt in the West; global warming is driving hundreds of species of fish further north as ocean temperatures warm. While the warming temperatures will cost fishing coastal communities around the world billions of dollars over the next few decades, the biggest changes are expected along the West Coast. Finally, in India, thunder, lightning and dust storms have caused the deaths of more than 150 people, and injured 300 others. As global temperatures rise, the intensity of these types of storms is also expected to increase.

In brief: Former EPA chief offers advice on how to survive the Trump era

Attendees at Climate Solutions’ 20th anniversary breakfast in Seattle were treated to a fiery, funny, powerful keynote address from former EPA Administrator Gina McCarthy. McCarthy offered a helpful playbook on how to best survive this strange time in history we’re living in, and how to fight back and stay aware without losing hope. See the video or read some of the key takeaways to appreciate it for yourself.