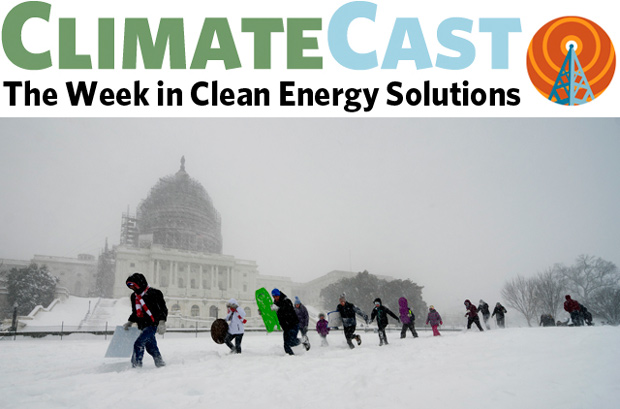 Solar firms secured nine-figure investments last week, a key ingredient for a sector whose costs are incurred almost entirely up front (since the fuel is free). Sunrun landed a quarter-billion dollars in bank financing, while SolarCity sold $185 million in securitized solar loans, marking the first time that loans backed by its solar income were rated as investment-grade. This torrent of capital underscored a Deutsche Banker’s view that the “smart money is going green,” and paled next to the $5 billion Clean Energy Fund approved for New York state. To use that money, distributed-solar firms are trying new strategies to win customers. SolarCity offered non-profits $200 for each new customer referral; utilities explored new community solar partnerships; and Sunrun rolled out an app that its customers can use to track—and brag about—their solar production.

India’s latest auction for solar electricity yielded a record-low price of 6.5 cents per kilowatt-hour, leading the country’s energy minister to crow that solar power there is now cheaper than coal-fired electricity. That shift may nudge India’s electrification further toward solar, as long as the financing can be found. Germany’s first solar auctions closed at a price of 8 to 9 euro cents (US$0.09-0.10) per kWh, just above and below the state-set solar feed-in tariffs, validating the fairness of those rates. The Germans lost their claim last year as the country with the most installed solar power, as the Chinese total jumped 15 GW to reach 43 GW, overtaking Germany by 3 GW.

2015 the hottest year in history by wide margin

2015 set the mark for hottest year in recorded history, notching an average global temperature that was 1.6˚F higher than the 20th-century average and shattering 2014’s previous record by a quarter of a degree. The finding—announced last week by NASA and NOAA—further demolishes the notion of a “hiatus” in global warming; scientists calculated that there’s only an 0.01 percent probability the recent string of unusually hot years could have occurred by chance. Previous senatorial antics notwithstanding, last weekend’s mammoth mid-Atlantic blizzard is consistent with the modeled impacts of global warming, as is the spread of Zika virus, which has been linked to the devastating birth defect microencephaly.

It may take five extra years to reach President Obama’s 2015 goal of getting 1 million plug-in cars on US roads, Energy Secretary Ernest Moniz said last week. Low gas prices are hurting EV sales, Tesla founder Elon Musk acknowledged; with 50,000 EVs sold last year, Tesla nevertheless wasn’t the world’s largest EV maker, coming in second to Chinese firm BYD. Meanwhile, innovators are embracing auto electrification: for $6,500, one vendor will double the Nissan Leaf’s battery pack to extend its range by 80 miles. Penn State researchers modified a lithium-ion battery to preserve its range in cold weather, and California is experimenting with taxing drivers by the mile so they pay for highways even if they’re running on electrons instead of gasoline.

The Obama administration proposed new rules last week to reduce the leakage, flaring, and venting of methane from oil and gas fields on public and tribal lands. Methane that escapes unburned is a potent climate pollutant; flared methane produces planet-warming CO2 without benefit. The rules aim to cut methane emissions by about 40 percent, or 169,000 tons annually—roughly twice what has already leaked from southern California’s Aliso Canyon natural gas storage field since October. The California leak, said to be the product of lax oversight at the 400 gas storage fields nationwide, highlights how hard it is to securely store any gas in bulk—an issue that would surface if carbon capture and sequestration were adopted despite its high costs.

President Obama’s Clean Power Plan survived a challenge from 27 states last week in federal appeals court, when judges rebuffed a bid to suspend the climate-pollution-reducing plan pending review. The case will be argued in June. An injunction would have undermined US commitments to climate action; leaving the rule in place will nudge utilities and states to devise plans to meet the rule’s requirements. In other judicial news, the US Supreme Court Monday upheld the Federal Energy Regulatory Commission’s rule that power companies must pay customers willing to curb demand during peak periods, an approach that averts the need for dirty generation and helps accommodate more renewable power on the grid.

Watch this week for donnybrooks, posturing, and horse-trading on the floor of the US Senate as the Energy Policy Modernization Act comes up for debate and amendment. The bill—co-sponsored by Sens. Lisa Murkowski (R-AK) and Maria Cantwell (D-WA) and savaged by the Heritage Foundation—earned its way out of committee on an 18-4 vote because some of its controversial elements had been stripped out. Among the maneuvers to watch for: Sen. Brian Schatz (D-HI) once again trying to get senators on the record for their views on global warming.