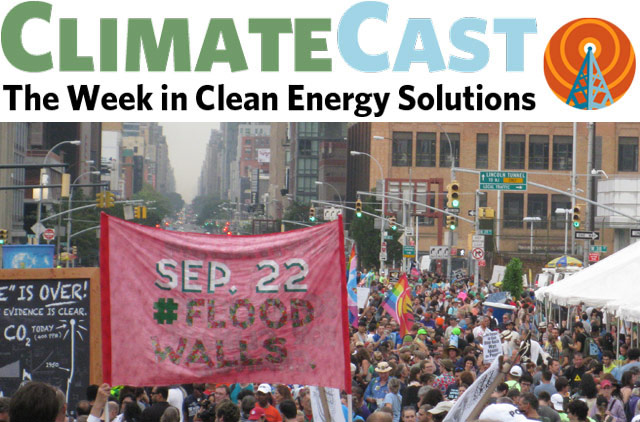 Between three and four hundred thousand people marched through Manhattan calling for climate action Sunday, blasting through organizers’ low-ball benchmarks of 100,000 to surpass the 2009 event in Copenhagen. So many people took part that it took more than two hours for all the marchers to cross the starting line. Besides the turn-out, activists met their goal of diversifying the face of the climate movement, both in the run-up to the event and the coverage afterwards.

Broad base of nations, investors back carbon price

More than 70 countries, seven states, and three Canadian provinces, collectively responsible for over half the world’s global warming pollution, went public Monday with their support for the World Bank's call for a price on carbon. The statement, signed by all three West Coast states, also won the backing of investors managing $24 trillion in assets, even as demonstrators massed on Wall Street in opposition to continued reliance on fossil fuels. The announcement comes a day before a U.N. summit of world leaders, which is not expected to produce any immediate diplomatic progress, but rather build momentum for talks in Lima this year and Paris in 2015.

Burnishing their bona fides ahead of this week’s climate summit, leaders from President Obama on down announced steps to cut carbon pollution. Obama rolled out a potpourri of projects to boost renewables and reduce energy demand, including new efficiency standards for air conditioners, and touted voluntary commitments from big business to phase out a climate-tweaking refrigerant. California Gov. Jerry Brown signed a package of bills to promote electric cars, whose carbon footprint has been shrinking. And New York Mayor Bill de Blasio unveiled plans for $1 billion in energy retrofits for municipal buildings and for more landlords to reveal their buildings’ energy use, indirectly pressuring them to invest in conservation.

Starting the engines for second-generation biofuels

The Federal government announced three biofuel contracts worth $210 million to turn waste products into more than 100 million gallons of jet fuel and diesel fuel for the Navy. The three firms will produce the fuels from waste fats, municipal garbage, and wood, side-stepping criticism that earlier biofuel projects competed with crops grown for food. In the Midwest, three new plants are forging ahead to produce cellulosic ethanol from inedible parts of the corn plant, despite questions about the competing value of corn stalks as a soil amendment, and the need for new technology to bale and transport the material to the refineries.

The irony is rich indeed: the Rockefeller family whose name is synonymous with oil announced that its $860 million philanthropic foundation will divest of fossil fuels, citing both the “moral and economic dimension” investing in companies whose activities contribute to global warming. The Rockefeller Brothers Fund joins 180 institutions with assets worth more than $50 billion that have vowed to sell off their fossil fuel energy stocks. The Fund may be happy to be rid of any coal company investments, given the bleak news about coal plant retirements, falling exports, problematic leases, and China’s diminishing appetite for coal

Planetary warming will cost us in fire and farmland

Global warming could increase the cost of U.S. wildfires by $60 billion a year, according to a new study from New York University and two environmental groups. The same warming trends will shrink the snowpack that feed the spigots of California’s Central Valley, whose worsening drought is described vividly in National Geographic, and where residents’ wells are drying up as farmers sink deeper pipes in pursuit of a falling water table. In the mountains upstream of the valley, the whitebark pine is at risk from the changing climate, leading some scientists to advocate its “assisted migration,” planting it where it may find a more hospitable climate.

A tuna caught off Alaska’s Copper River and an ocean sunfish spotted nearby strayed there from their typical southerly habitat thanks to unusually warm ocean waters in the North Pacific, which might impact the survival of young salmon reaching the sea this summer. Extraordinary warmth also came to the Arctic, where this summer’s ice pack was the sixth-smallest ever recorded. But new evidence from the Bahamas offers hope for wildlife species enduring warmer climates: anole lizards transplanted to hotter habitats were able to adjust, with the hardiest one-fourth of the population surviving and raising young that were better adapted to the higher temperatures.

The price of rooftop solar dropped by 12 to 15 percent last year, according to a Lawrence Berkeley National Laboratory report released last week. The drop continues a trend that has seen prices cut in half since 2009, and is continuing based on data for the first half of this year. The prices bolster the business case for residential and commercial solar, which is seeing a 50 percent increase this year in private investment. In Africa, much smaller-scale investments are bringing solar electricity to places far off the grid, where it displaces pricey diesel and powers micro-entrepreneurs who charge their neighbors’ cell phones for a fee.

Songbird deaths from wind turbines have been over-estimated because studies relied too heavily on data from first-generation wind farms, according to a new study released last week. The peer-reviewed study, sponsored by a coalition of environmental, government, and wind-industry groups, estimated that hundreds of thousands of songbirds are killed each year by collisions with wind turbines, but that this number is tiny compared with other human threats to the birds and to the bird populations themselves. The results might be encouraging to this group of Canadians, who built their own wind generator from scratch and documented their efforts in an Action4Climate video.