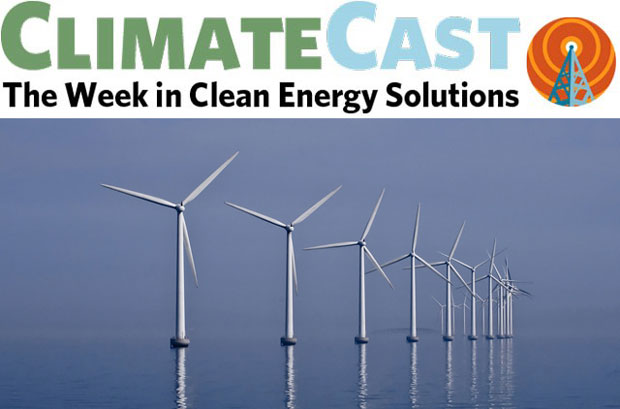 In a climate business declaration on steroids, 13 of the largest U.S. companies committed at a White House press conference Monday to invest $140 billion in climate action. The pledges include project financing by Bank of America, reduced carbon intensity by Alcoa, and renewable energy purchases by Google, Apple, and Microsoft. A few promises were lighter lifts than meets the eye, such as Berkshire-Hathaway’s vow to shutter Nevada coal plants, some of whose closures are already mandated by law. In a similar vein, opposition to the EPA’s Clean Power rules—due to be finalized this week—is weakening as states realize they will comply thanks to trends already in motion.

Handicapping the presidential candidates on climate

Hillary Clinton called for a seven-fold increase in U.S. solar power by the end of her first term—a 120 GW increase—and supplying one-third of the country’s electricity with renewables by 2027. The goal falls short of Maryland Gov. Martin O’Malley’s call to run the U.S. on 100 percent renewable energy by 2050, but bests the Republican field by a long shot, including new entrant Ohio Gov. John Kasich, who froze his state’s Renewable Portfolio Standard. Republicans’ climate recalcitrance may hobble them in the general election, with swing-state voters in Colorado, Iowa, and Virginia backing climate action by wide margins, according to a poll released last week.

As Buffalo, NY reveled in an economic renaissance driven by wind power and solar energy, the wind industry put steel in the water off Block Island, RI, where workers began installing the foundations for the country’s first offshore wind farm. Growing proportions of sun and wind energy—which fluctuates with the weather—will require changes to the grid, allowing utilities to adjust customers’ demand, replacing “baseload” generating stations that operate around the clock with more adjustable power plants, and adding storage to the grid. Hydro-rich Norway is headed in that direction, devising new ways its reservoirs and hydropower turbines can smooth out the bumps in Europe’s renewable power supply.

Huge losses in the balance, pending action on climate

Global warming of 2˚C would cost investors $4.2 trillion, roughly as much as the total value of the world’s oil and gas companies, according to a new report from The Economist’s Intelligence Unit. Along the coast, nearly 100 Army Corps of Engineers flood protection projects are highly vulnerable to expected sea level rise, says a Government Accountability Office report. In another surprising comparison, Cambridge researchers found that the societal costs of the climate pollution caused by the top 20 fossil fuel companies was greater than their after-tax profits. For pure coal companies, the results were even worse: their product caused more societal damage than they booked in revenue.

Oregon biofuel plant sells out of jet fuel through 2024

Commercial-scale production of renewable jet fuel found a tailwind last week when FedEx agreed to buy 3 million gallons a year made from wood waste in southern Oregon. Combined with a similar-sized contract announced last year with Southwest Airlines, Red Rock Biofuels’ $182 million plant has now pre-sold its entire output of jet fuel for its first eight years, beginning in early 2017. FedEx’s purchase includes carbon credits it can use to satisfy EU requirements. Industry observers see renewable jet fuel as the only near-term option for the aviation industry to reduce its dependence on climate-bending fossil fuels.

The rules of the energy road changed in France last week, when the legislature voted to quadruple the carbon tax to $61 per ton by 2020 and obtain 32 percent of all energy from renewables by 2030. Across the channel, the ruling Conservatives proposed cutting U.K. solar subsidies to lower electric rates, but then revealed the average household would save less than $1 annually. The Economist excoriated all kinds of energy subsidies, which the IMF estimates prop up fossil fuels to the tune of $5.3 trillion per year worldwide. Tax favors carry a strong political allure, driving a bipartisan U.S. Senate committee vote to extend the wind energy tax credit.

Disgruntled drivers of Hyundai’s fuel-cell SUV complained last week that they couldn’t drive their cars because so many hydrogen fueling stations were out of service in southern California—a problem the California Air Resources Board promises will ease as more stations are completed. Oregon boosted EVs by installing 44 quick chargers around the state, while London’s mayor suggested that EV drivers get discounts on parking and the $18 fee drivers pay to enter the central city. Blandishments for clean vehicles take on greater importance in light of new figures showing that after several years of decline, US car travel increased nearly 3 percent in the last year.