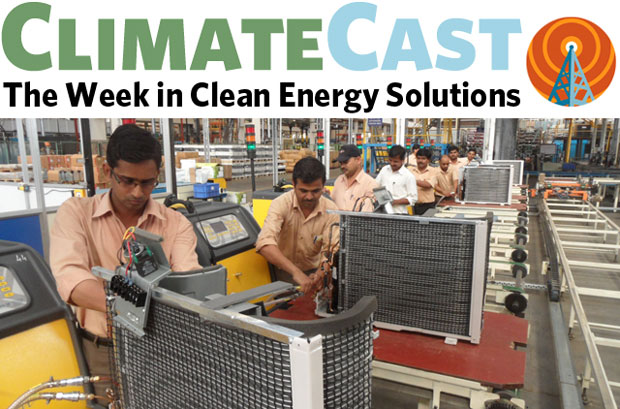 Chilling in Kigali: agreement on HFCs will cool Earth ~0.4˚C

Diplomats agreed last week to phase out the use of HFCs (hydrofluorocarbons), refrigerants that trap heat in the atmosphere 10,000 times more efficiently than carbon dioxide. The accord—estimated to avoid about 0.35˚C of warming by mid-century—amends the 1987 treaty banning ozone-destroying chemicals that led to the use of HFCs instead. A sticking point en route to “yes” was that HFC substitutes will raise the cost of air-conditioning, which is just coming within economic reach of the middle-class in poor, hot nations such as India. To win worldwide support, the new agreement provides for three tracks: the richest nations freeze their use of HFCs by 2018 and phase them out by 2046; a small group of the world’s hottest countries can increase their use of HFCs until 2028; and everyone else faces a 2024 deadline. The pact, which won the blessing of the chemical industry, caps a fortnight of significant steps toward curbing climate change.

Climate gets a cameo in US presidential race

A day after a question at last Monday’s town hall debate shone a spotlight on the differences between Donald Trump and Hillary Clinton over climate and clean energy, Clinton took her campaign to Florida with former Vice-President Al Gore and dedicated their entire appearance to the topic. She vowed for the US to install 500 million solar panels during her first term, promised projects to adapt to rising seas, and excoriated her opponent and GOP Sen. Marco Rubio for their climate denial. Although the next president will have tremendous power over whether the US opens more land to gas and oil leasing and continues to transition toward clean energy, and might theoretically be able to institute a cap-and-trade system by executive action, climate change is not expected to figure in the final debate between the candidates this Wednesday.

Climate issues trickle down the ballot

The climate is an issue further down the ballot, as former Al Gore aide Katie McGinty seeks a US Senate seat in Pennsylvania with environmental backing despite her energy policy, which is stuck in “all of the above.” Two Vermont towns will consider approving an Iberdrola windfarm on nearby ridgetops, with the promise of $14 million in direct payments from the company to residents if they do. Climate issues have also cropped up in two Florida races. In Washington, I-732—the only overall climate measure on any state ballot this election—has been attracting national attention, with articles in Fortune, the Los Angeles Times, and The Washington Post about the merits of its approach to taxing carbon and using the revenues to reduce other taxes and fund a low-income tax credit, and two others in ThinkProgress and Vox dissecting the factors that led some environmental groups to oppose it.

Burning biomass a hard sell as form of ‘clean’ energy

Portland General Electric will try running its 600-MW Boardman power station on a day’s worth of biomass instead of coal this December, it announced last week. A switch to biomass could allow the plant to keep operating past 2020, when PGE has agreed to stop burning coal there. But a new study by the Natural Resources Defense Council finds that replacing coal with biomass in the UK is costlier and not as carbon-neutral as its advocates claim. In the US, Maine’s senators are pushing for biomass power to be counted as carbon-neutral, sparking further dispute over the wisdom of that strategy.

World petroleum demand will decline after 2030, according to two out of three scenarios released last week by the World Energy Council, casting doubt on the profitability of new investment in fossil infrastructure. The scenarios’ release coincided with Carbon Tracker Initiative’s publication of an even more radical projection: by 2020, none of the growth in world energy use will be supplied by fossil fuels, thanks to the rapid scalability of renewable energy. The falling cost of clean power means that investment has leveled off even as the amount of new capacity installed continues to grow; an updated Dept. of Energy report argues that US loan guarantees de-risked five early utility-scale PV projects and paved the way for private investment in 45 others. For developing countries, the UN-backed Green Climate Fund approved $745 million in climate mitigation and adaptation investments, bringing its total portfolio over $1 billion.

Climate’s fingerprints, from fire and ice to fresh water

Small island nations—already among the most vulnerable to global warming—learned another way last week that sea level rise will endanger them. As salt water percolates higher in the soil, fresh water aquifers rise in elevation, exposing more of them to evaporation at the surface and leaving less water for human use. In the American West, a new study estimates that 44 percent of the acres charred by wildfire in the last three decades burned because of climate change. The drastic 75 percent decrease in the volume of Arctic ice since 1979 is captured in this animation, set to original piano music. All of these impacts highlight the urgency of the study that the IPCC is launching on how to hold global warming to 1.5˚C, and the danger of counting on “negative emissions,” given how uncertain the prospect of drawing CO2 from the air and sequestering it, according to a new paper in Science.

The challenge of controlling humanity’s impact on the climate is distilled succinctly in this cartoon overview of the subject, drawn in a style that could best be described as Minecraft meets Dilbert. It lays out the constraints of the carbon budget that we need to follow to achieve the goals of the Paris accord, and uses a “wheel of fortune” to convey the probability of staying below a 2˚C rise in global temperature. Worth a read.