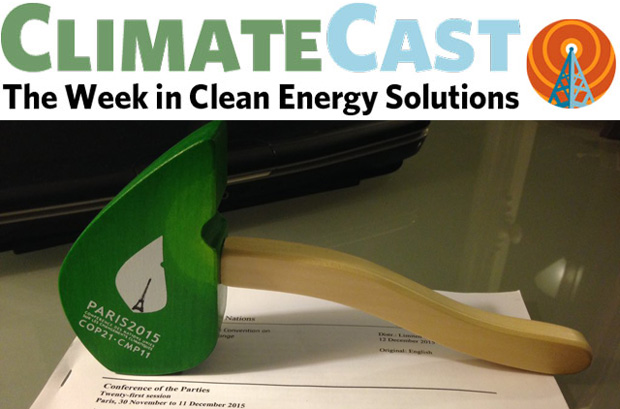 As activists and diplomats decamped from the Paris climate summit, the real work remained: turning an agreement-in-principle into action. Bending the emissions curves downward will require a massive expansion of clean-energy investment, and the accord was hailed for sending a strong signal to investors and captains of industry to shift their attention away from fossil fuels. Business analysts foresaw growth opportunities for the renewables sector at the expense of the carbon sector, and the markets agreed, sending clean-energy stocks up and coal down. Coal and oil executives whistled past the graveyard, playing down the impact that the Paris Agreement is likely to have on their markets.

The pact adopted in Paris strengthened the overall goal of international climate action, calling for action to keep global warming well below the 2˚C benchmark adopted in 2009 at Copenhagen and to try to keep it within 1.5˚. This boost was promoted by a “high-ambition coalition” of wealthier industrialized nations with some of the poorer and most vulnerable ones—an alliance that split the developing-countries bloc and rearranged the fault lines that have marked past climate negotiations. Other key provisions of the agreement—listed by The Guardian and evaluated by The New Republic—call for countries to revise their national pledges every five years, and to produce less climate pollution than is absorbed from the atmosphere by the second half of the century. Although national pledges aren’t legally binding, the moral force of the agreement may matter more, since activists can use the pact’s goals as leverage to demand stronger climate action.

Getting to Yes: diplomacy at and before Le Bourget

The shadow of Copenhagen’s 2009 failure hung over the Paris talks, but French hosts, UN negotiators, and other world leaders laid careful groundwork to avoid a repeat of that disappointment. They worked out bilateral agreements ahead of time, included emerging economies in the drafting process, and shifted the heads-of-state participation to the beginning for tone-setting instead of the final hard bargaining sessions. They abandoned the Kyoto model of a binding agreement that bound only the industrialized world and instead constructed the agreement from voluntary pledges by all nations. Still, talks grew tense over developing countries’ demands for hard financial obligations that the U.S. couldn’t promise; over the language of differentiating the commitments of richer and poorer nations; and over invoking a 1.5˚C target for warming. Some of these were resolved through an African tribal negotiating technique called an indaba; a final hurdle surfaced when a legally binding “shall” took the place of an exhortatory “should,” and US Secretary of State John Kerry dug in his heels, holding up the concluding plenary until it was made “should” again, sparing the need for Congressional approval with unattainable GOP backing.

Nevada, which already landed the Tesla Gigafactory, will be home to Faraday Future’s $1 billion electric-vehicle factory near Las Vegas, Gov. Brian Sandoval announced last week. The firm, backed by a Chinese billionaire, plans to unveil its prototype next month and begin production in 2017. Meanwhile, Ford announced it will invest $4.5 billion in its EV line and bring 13 new models to market by 2020. The announcements come amid reports that European internal-combustion cars emit 38 percent more carbon pollution than official test results would suggest—which this report attributes to known flaws in testing protocols, apart from the culture of aggressive ambition attributed to tarnished automaker Volkswagen.

The mixed promise of cheap oil

Oil prices fell to a seven-year low last week following OPEC’s decision to abandon its production limit, causing a $230 billion loss in oil company valuations. Low oil prices are good for the climate because they make some petroleum deposits uneconomical to develop. However, low gasoline prices—while they do keep much-needed money in consumers’ pockets—also induce motorists to drive more and choose less fuel-efficient vehicles, thereby increasing carbon emissions. With the price of crude oil falling below $35 a barrel for the first time in six years, the U.S. Congress debated whether to lift the country’s ban on oil exports, as part of a possible deal to extend wind and solar tax credits.

The scramble over utilities’ responsibilities and opportunities in the age of decentralized power continued, as Pacific Gas and Electric asked to double what it charges customers who’ve opted to obtain their power from community-choice suppliers. At diversified utility NRG, CEO David Crane stepped down last week amid talk that he might raise the capital to take the firm’s 4.5 GW clean energy division with him. In San Antonio, Texas, the utility is joining the rooftop solar bandwagon, crediting ratepayers with 3 cents per kilowatt-hour generated atop their homes—about $20 per month—if they rent their roofs to a solar firm that installs PVs and provides the power to the utility grid.

Image: A replica of the COP21 gavel rests atop a copy of the Paris Agreement adopted last Saturday. Photo courtesy of Gabriel Marty.