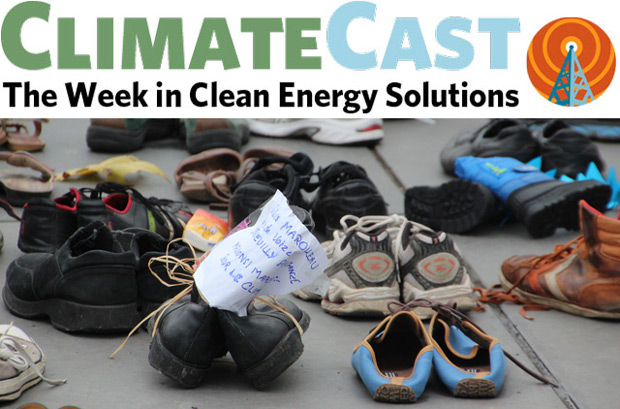 As the Paris climate summit opened with speeches by 150 world leaders, observers were called upon to believe several contradictory ideas simultaneously. The talks offer a better chance at a landmark global-warming agreement than the 2009 Copenhagen talks (whose travails are recapped in this excellent Guardian backgrounder), in part because the price of clean power has dropped dramatically. But the pact will almost certainly fall short of what’s needed to hold planetary warming below 2˚C, so any hope of reaching that goal rests with the economics of renewable energy continuing to improve and a periodic review process still under negotiation. In deference to political realities, the concept of a carbon budget, beloved by scientists and activists, was discarded in favor of a voluntary national commitments. In deference to security concerns following the recent terror attacks, the major climate march was cancelled, though replaced by a display of 11,000 pairs of shoes symbolizing those who would have marched; 24 activists who refused to refrain from protesting were placed under house arrest.

Two intertwined initiatives for clean-energy research and development debuted as the Paris climate talks opened, with 21 nations announcing plans to double their research funding by 2020 under the banner of Mission Innovation, to an anticipated total of about $20 billion. In tandem, two dozen wealthy entrepreneurs including Microsoft co-founder Bill Gates and Facebook founder Mark Zuckerberg formed the Breakthrough Energy Coalition to help new clean-energy ventures cross the so-called “valley of death” that can prevent new businesses from scaling up. Looking these gift coalitions squarely in the mouth, climate thinker Joe Romm suggested that capital to deploy already-developed technologies was a greater need than new R&D.

And now, growing public support for a climate deal

By a margin of more than two to one, Americans want the US to join an international climate agreement, according to a New York Times/CBS poll released this week. Although a narrow majority of Republicans opposes a treaty, a slight majority nevertheless supports curbs on carbon pollution from power plants. This support for climate action shows progress toward overcoming the polarization on global warming—a schism whose origins were illuminated last week by research that linked Exxon and Koch brothers’ funding to the coordinated repetition of contrarian messages about climate science. ExxonMobil is under pressure for denying the dangers of climate change after its own research confirmed them, reports Politico.

Want an Autowende as part of your Energiewende?

A constellation of factors—from clean-air targets to the limits of further innovation in internal combustion—will eventually lead electric vehicles to displace their hydrocarbon-fueled counterparts, says this comprehensive overview. (Worthwhile even with the grain of salt made necessary because the author is CEO of a European car-charging network.) In the US, many car dealers are reluctant to tout EVs to car-buyers, in part because they require so little maintenance, and 11 states have imposed special fees on EVs to ensure they contribute to highway maintenance despite paying no motor-fuel tax. With U.S. per-capita driving on the rebound, EVs are increasingly significant to curb the climate impact of each vehicle-mile.

The energy revolution will probably be incentivized

A bipartisan tax bill nearing completion would extend the federal solar tax credit and ramp down the wind energy credit, according to reports emerging from Washington. The extension would result from traditional horse-trading politics, with Republicans gaining an extension on business tax breaks for research, development, and bonus depreciation, while Democrats secure permanent tax breaks for low-income working families. Clean energy tax credits disproportionately benefit the wealthy, explains Vox’s David Roberts, but they’re the only way to incentivize clean energy in Congress’s current dysfunctional state. Speaking of dysfunction, a federal budget deadline coincides with the Paris summit’s scheduled denouement, setting up a possible showdown over US Green Climate Fund appropriations.

Manitoba will use a cap to set a price on carbon, with details expected at the end of this week. The reports came at the end of last week’s meeting between Prime Minister Justin Trudeau and provincial premiers, which foreshadowed a shift in Canada’s tone in international climate diplomacy. The Manitoba premier’s statement came a day after Alberta announced a plan to tax carbon and get 30 percent of its electricity from renewable sources. The Alberta approach—developed by a blue-ribbon panel in six months with the support of industry and environmentalists—reinvests most of the proceeds in clean energy, a choice decried by economists but applauded by pragmatists.

Issues of equity snapped into focus as the Paris talks began, with India insisting rich nations fund the transition to clean energy for industrialized and developing nations alike. Support from India—the world’s third-largest emitter of greenhouse gases—is seen as crucial to an agreement. Indian Prime Minister Modi, who last week signaled his opposition to a planned phase-out of fossil fuels by 2100, joined the French prime minister to announce the formation of an international solar alliance to promote the use of solar in the tropics. That shift is already underway: 2014 marked the first year that clean energy investment in the developing world exceeded that in OECD nations.

Image: Shoes in Paris’s Place de la Republique, part of an installation of more than 11,000 pairs symbolizing those who would have marched if demonstrations had been permitted. Photo by Takver, via Flickr.

Cities and states tell world: We will always have Paris
EVs’ future looks brighter; clean energy ‘unstoppable’
Carbon pricing is on the table from C to shining sea
Clean energy employs more Americans than gas & coal
More by this author