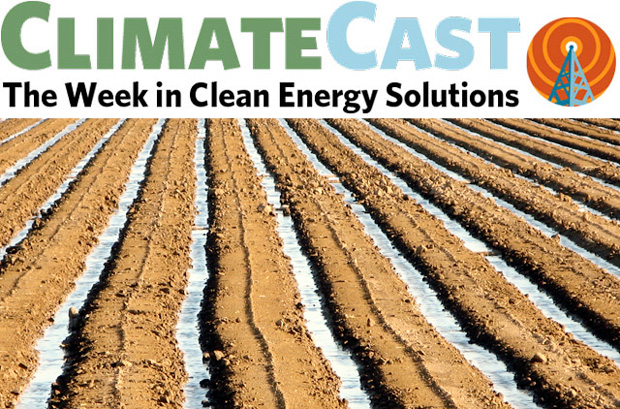 In a political earthquake, Alberta voters last week rejected the Progressive Conservatives who ruled the province for 43 years in favor of the leftist New Democratic Party, which promised to boost corporate taxes and consider increasing the royalties charged to oil companies. Incoming Premier Rachel Notley vowed to end provincial lobbying for the Keystone XL pipeline, which would pump tar sands oil to Oklahoma and beyond. The NDP also pledged to take climate policy seriously, but the party was thin on specifics during the campaign. Nonetheless, the mood has changed, and investment analysts turned bearish on Albertan petroleum after the results were announced.

Garbage from Reno and vicinity will be converted to jet fuel in a $200 million plant to be built 20 miles east of the Nevada gambling mecca, according to an announcement last week. Fulcrum Bioenergy has secured an annual supply of 200,000 tons of municipal solid waste, which it will turn into synthetic crude oil and then refine to more than 10 million gallons a year of jet fuel, much of it already pre-sold to Cathay Pacific Airways. Meanwhile, Alaska Airlines announced a plan to use fuel synthesized from bio-alcohol in a demonstration flight once the new fuel achieves certification, which is expected later this year.

It was the “week after” for Tesla’s battery packs, as details emerged about their limitations, even as pre-orders surged into the tens of thousands. Because of its chemistry, Tesla’s 10-kWh battery can be used only for occasional back-up power, which it provides much more expensively than a fossil-fueled generator. The 7-kWh version is made for daily use, but uneconomical where net metering provides a “virtual battery” instead. For commercial customers who pay for their maximum demand, Tesla batteries can be a cost-effective way to shave those peaks, wrote investment analysts at UBS. Concentrating solar power plants rely on energy storage as well, so they can compete effectively in British and South African power markets.

Solar energy is the renewable technology best positioned to grow to meet the scale of our climate challenge, according to a new study from the MIT Energy Initiative. That conclusion was surprising only because of the preponderance of oil companies on the initiative’s governing board and roster of supporters. In a more controversial finding, the study recommends an end to net metering and solar investment tax credits, and instead favors utility-scale solar and production tax credits—views that provoked stiff disagreement from the solar industry and a deeper examination of how much it costs to serve residential customers, whether or not they have solar.

Seattle prepares to give oil firm a Shell-acking

The White House Monday granted conditional approval for Shell to search for oil in the Arctic, while “kayativists” got trained to create a “ShellNo” flotilla of kayaks and small craft to protest Shell’s plan to dock its drilling rig at the Port of Seattle. Battle lines are drawn between the oil company and the environmentalists, as Shell won an injunction to prevent Greenpeace from interfering with its rigs, and KC Golden decried the fact that the melting Arctic ice cap is hailed as an opportunity to drill for oil, when the estimated 26 billion barrels of recoverable oil must stay beneath the seafloor to preserve the planet’s climate.

The depth of the Northwest’s drought continued to sink in last week, as a federal tally found the spring snowpack at or below historic minimums. The Bonneville Power Administration issued a dry-year declaration because little of the region’s precipitation fell as snow and much of that melted early—although dam managers adapted by filling reservoirs early. In California, new research revealed that wildfires have turned the state’s forests from carbon sinks to sources of climate pollution, and unseasonably warm winter and spring temperatures played havoc with farmers’ harvest calendars. Anticipating a further-changed climate, some analysts suggested the U.S. should spread its fruit and vegetable growing to other states.

The chances have jumped that your local TV meteorologist recognizes humans are changing the climate, according to a new poll. In 2010, just one-third of forecasters thought the climate was changing and people were at least half responsible; in this year’s survey, two-thirds held that view. China’s top meteorologist warned that climate change could endanger key infrastructure projects, while Seattle forecaster Cliff Mass framed this year as a “stress test” for the Northwest’s adaptation to an altered climate—although he couldn’t resist a tasteless joke about whether a warmer Cascadia might actually be more pleasant.

On the Climate Solutions blog: Joelle Robinson calls for comments to be submitted to the Seattle Port Commission in advance of a closed-door special meeting to discuss the terms of Shell’s Port lease. Guest Blogger Greenpeace Executive Director and Seattle native Annie Leonard praises Seattle for standing tough against Shell and extends the invitation to join a three-day direct action on May 16-18 to protest Shell at the Port of Seattle. Joelle invites people to join several tribal leaders at an event celebrating the Salish Sea, which natives are fighting to protect against coal and oil transportation. Jonathan Lawson posts video highlights of the Climate Solutions annual breakfast.