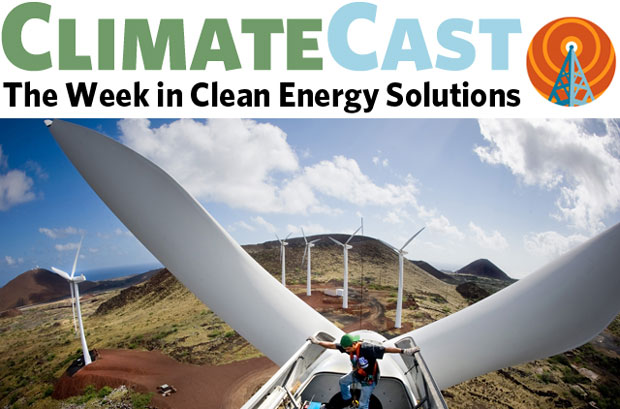 2016 was the hottest year on record, scientists from three agencies in the US and UK announced last week, marking the third consecutive year that the world average temperature record was broken. The measurements—which show the global average temperature about 1.1˚C above the pre-industrial norm—suggest that the planet is now warmer than at any time in the last 115,000 years. Many countries and the Arctic set all-time heat records. Last year’s strong El Niño was responsible for about 0.12˚C of the warming, implying that 2017’s temperatures are likely to recede slightly. A resurgence of warm Arctic weather again halted the seasonal spread of sea ice. The Guardian chronicled the worldwide impacts of global warming in stories from around the planet, and posted a countdown clock tracking how close the world is to exceeding its 2˚C warming budget.

President Trump’s climate-related nominees marched toward confirmation last week, as EPA-designate Scott Pruitt’s waffled on the role of human activity in warming the planet just as news report revealed that 2016 was the warmest year in recorded history. Former Exxon Mobil CEO Rex Tillerson’s confirmation as secretary of state was nearly assured, as Sens. John McCain, Lindsey Graham, and Marco Rubio announced they will support his nomination despite earlier misgivings. In his confirmation hearings, Tillerson stressed his desire for the US to retain a seat at the global climate talks, a presence that could derail the negotiations as much as a walkout. Texas Ex-Gov. Rick Perry brought good humor to hearings on his bid to head an agency he once sought to disband (a proposal he says he now regrets), though his hearing was unsettled by reports that the Trump administration would zero out funding for many DOE programs. Meanwhile, Trump chief of staff Reince Priebus issued a memo that halted four new appliance efficiency standards on the brink of enactment, and Trump’s plan for the EPA leaked, disclosing a vision to radically change the agency’s approach to science.

As Donald Trump was being inaugurated in Washington, DC, California’s Air Resources Board released its draft blueprint for meeting the state’s ambitious goal of cutting climate pollution 40 percent below 1990 levels by 2030. The plan calls for 4.2 million zero-emission vehicles, a tightening of the state’s tailpipe standards, and a 20 percent cut in refinery pollution, among other measures. Even as the Golden State forged ahead, it faced the threat that federal government would attempt to pre-empt its policies—a strategy that EPA nominee Scott Pruitt refused to rule out in his confirmation hearing. The federal vacuum on environmental protection also moved six state attorneys-general to sue in defense of the EPA’s Cross-State Air Pollution rule, and led China to speak up for climate action at the Davos World Economic Forum as it asserts a larger leadership role on climate in coming years.

Stakeholders are slamming Portland General Electric over a plan that would replace the Boardman coal plant—scheduled to close in 2020—with new PGE-owned natural-gas-fired generators, instead of pursuing clean energy. Renewables advocates say a different strategy that leans heavily on wind scored nearly as high as a substitute for the 600-MW plant. In Montana, the Colstrip coal-fired power plant may close its two older units even before the 2022 deadline agreed to last year, according to filings last week by part-owner Puget Sound Energy. Factors at play include plant operator Talen Energy’s request to quit by mid-2018, and a bill in the Montana legislature that would double the transmission tax on Colstrip electricity to 3 cents per kilowatt-hour.

Getting rid of the inconvenient truths

In a week when President Trump’s spokeswoman Kellyanne Conway defended his press secretary’s reliance on “alternative facts,” the incoming administration quickly re-made the DOE website and scrubbed the official White House website of its climate change pages (along with others relating to LGBT rights, indigenous peoples, and more). Obama’s White House content remains live on a separate archived website. Mindful of the possibility that key information might be walled off by the new administration, volunteers with DataRefuge archived more than 3,000 NOAA datasets this month, and the Columbia Law School set up a website to track Trump’s attempts to roll back federal climate and energy rules. And if you were planning to attend the Centers for Disease Control summit on Climate and Health next month, plan again: the CDC abruptly cancelled the conference.

Utilities need new business models and novel rate structures that price electricity by location and time of day in order to thrive in the future, according to a report released last month by MIT and explained last week in a Vox interview. Bloomberg New Energy Finance takes a slightly different approach in its forecast for 2017, and says utilities must shift their paradigm from finding “base-load” power that can run 24/7, to obtaining “base-cost” renewables that they supplement with demand response and other flexible resources. UtilityDive offers its own 2017 predictions, which anticipate continued growth in renewables and natural gas, while coal gets a reprieve under Trump—an unlikely confluence unless demand grows more than expected. BNEF and UtilityDive agree this is likely to be a good year for battery storage, a notion that is borne out by new installations such as Sierra Nevada Brewing’s 500-kW battery that helps it avoid demand charges, and an Outer Banks, NC utility that connected a 1-MW battery to a barrier island’s microgrid to reduce charges for transmission from the mainland.

Wind takes flight, offshore and on

In the last week of the Obama administration, the federal Bureau of Land Management green-lighted the first half of a massive 3-GW wind power project in Wyoming. The project also won approval to disturb bald and golden eagle habitat in exchange for retrofitting existing transmission lines in the region so they won’t electrocute eagles. The Department of Interior meanwhile scheduled a lease auction for 122,000 acres of wind sites off the North Carolina coast, to be held in March. Off Long Island, another offshore wind farm is poised to win approval this week from the local utility board. Rain may not follow the plow, as the old pioneer adage held, but the Upper Midwest is finding that wind farms follow transmission lines, as new regional transmission has made possible two large new wind projects.

Image: A technician works on a 900-kW wind turbine at a US base on Ascension Island. Photo by Lance Cheung, via Flickr.