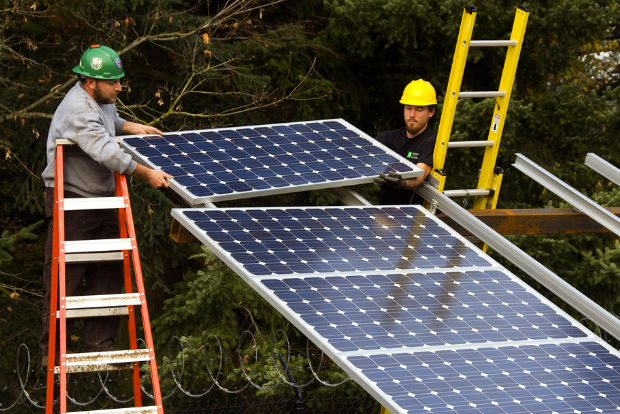 Putting a price on climate pollution can do more than reduce the burning of fossil fuels that are sending us into climate crisis. It can also accelerate the transition to clean energy, support the communities most impacted by pollution, save residents and businesses money, and create jobs.

Ten U.S. states have already put a price on climate pollution, including nine east coast states in the Regional Greenhouse Gas Initiative (RGGI) and California under its cap and invest program. Here is just a small sample of projects from these states.

California recently approved a $1 billion program to bring rooftop solar to 150,000 low-income renters at more than 2,000 multifamily affordable rental properties over the next decade. Using proceeds from the state’s cap and invest program, landlords can apply for incentives to help them install solar panels on apartment buildings where low income residents live. A majority of the cost savings from the solar electricity will go to tenants through credits on utility bills.

Clean Technology and Manufacturing, Burlingame and City of Industry, CA

Electric bus manufacturer, Proterra, moved its headquarters to Silicon Valley in 2015 because it determined that the state could become its biggest market in the wake of California’s legislation to cut climate pollution. They expanded with a new $20 million factory near Los Angeles in 2017, designed to produce 400 buses per year and employ 100 assembly workers. Proterra’s CEO credits California’s cap and invest program with providing "regulatory certainty and consistent commitment to business and consumers in California."

Investments from the Regional Greenhouse Gas Initiative are supporting a center at New York’s Battery and Energy Storage Technology Consortium, created to attract and grow New York’s energy storage industry. Product development and testing can be difficult for individual companies to do on their own, and the center provides tools that companies need to bring new battery and energy storage technologies to the commercial market. These technologies are being used to increase efficiency and reliability on the electric grid, as well as in transportation, buildings, and portable electronics.  A study has estimated that the energy storage sector could create 43,000 new jobs in New York by 2030.

A new affordable housing project with over 200 apartments accessible to transit has been funded in part with $9.2 million California’s cap and invest program. The project, in a city with the lowest incomes in San Diego County, is designed to reduce health problems from nearby industrial facilities and improve access to green space. Energy efficiency improvements and good ventilation make it easier for residents to deal with heat waves and reduce illnesses related to poor indoor air. Transportation improvements reduce air pollution and make nearby schools and other essential destinations more accessible by transit, walking, and cycling. The project reduces greenhouse gases as much as taking 3,500 cars off the road.

Telecommunications company Oxford Networks was able to reduce its energy use by installing modern, efficient equipment with help from funding from the Regional Greenhouse Gas Initiative. The company has completed several projects, including one that allows its data center to cool equipment using cold outside air. These upgrades lower the company’s carbon footprint and are estimated to reduce the company’s energy costs by $3,000 to $5,000 per year.

These projects were completed through Efficiency Maine, which receives nearly a third of its funding from RGGI. In 2015, Efficiency Maine invested nearly $60 million in efficiency projects, leading to savings for homes and businesses of $30 million on their annual electric bills while reducing energy use by the equivalent of 26 million gallons of oil.

With just $70,000 from California’s cap and invest program, nonprofit Amigos de los Rios is supporting job development for at-risk teens as they help restore a park as part of a project to build an Emerald Necklace of trees around LA. They partner with a Job Corps program, which helps youth and young adults stay on course with vocational and educational goals during and after the program. Los Angeles County parks have lost a devastating 14,000 trees as a result of extreme drought due to climate change. The 230 drought-resistant trees planted with the grant helps protect the watershed and provide a buffer between the park and the nearby highway.