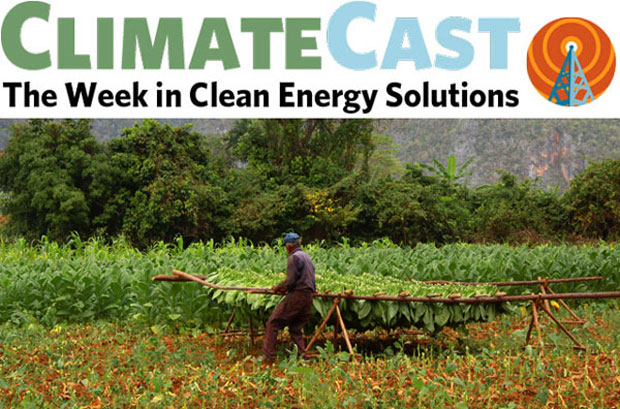 A legal challenge that would stop the EPA from drafting rules on carbon pollution from power plants had its first day in court last week, but received a skeptical hearing from the judges who seemed unpersuaded by the plaintiffs’ arguments. In other kerfuffles about the EPA’s Clean Power plan, several governors and senators pushed back against Senate Majority Leader Mitch McConnell’s urging that governors obstruct the adoption of state rules on the matter, while some utilities even lined up in support of state regulation, fearing that federally imposed rules would be harsher and harder to influence.

Carbon pollution from U.S. energy use increased slightly last year, the federal Energy Information Administration said Monday, but the 0.7 percent increase was well below the 2.4 percent growth in GNP. The divergence suggests that CO2 emissions and economic activity are decoupling—unlike the previous year’s increase, which was about as large as the economy’s 2013 expansion. Another EIA report released last week made tepid projections for renewable energy, leading critics to lambast the agency’s past misunderestimations of clean power and failure to account for the role of policy shifts. In contrast, Bloomberg New Energy Finance hailed 2013 as the first year when renewable capacity additions outpaced new fossil generation.

Although battery power has taken an early lead when it comes to cars with electric drive, a new wave of cars powered by hydrogen fuel cells is hitting the market, with several dozen leased Hyundai’s on the road already. Toyota will release its $58,000 Mirai this year and Honda will roll out another model next year. In the stationary fuel cell market, Bloom Energy has installed 150 megawatts of its natural-gas-powered fuel cells for commercial and industrial clients who need uninterrupted power, but because it is a privately held company, key variables such as its capital costs and reliability statistics remain unknown.

BP will say, not necessarily do, more about climate

With 98 percent of shareholders approving a call for transparency, BP agreed to publish information about its low-carbon technology investments; the impact of emission limits on oil and gas reserve valuations; its carbon footprint; and climate change lobbying. Although this move is a first in the oil industry, the resolution may be more a reflection of the need to maximize profits than of the company’s commitment to address climate change. BP’s chairman made clear the company will not set a carbon emissions target. Nor does BP plan to ramp back up the billions it had previously invested for decades in renewables and energy efficiency technologies that it subsequently sold off.

Harvard University faced disruption last week in the cause of divestment from fossil fuels, as students and alumni occupied campus buildings and displaced administrators to work remotely in libraries and nearby cafés. President Drew Faust offered to meet with protestors in private if they’d end the occupation; they countered with a request for a public dialogue and a moratorium on new fossil fuel investments. Elsewhere, the University of Colorado regents voted 7-2 against divestment, while sit-ins took place at Tulane, Yale, and William and Mary, and continued into their third week at Swarthmore College.

The EU will power 10 percent of its transportation needs with biofuels by 2020, but will cap the share of biofuels made from food crops at 7 percent, according to a plan overwhelmingly voted out of a European Parliament committee last week. The revisions come as the EU faces criticism over biomass-to-energy plants that burn wood harvested in the southeastern U.S. under loose environmental rules, and with a large carbon footprint from their transoceanic haul. Another biomass project is being received more enthusiastically: in a pilot project, Boeing and South African Airways, are raising 120 acres of an energy-rich tobacco variety to turn into biojet fuel.

Americans are the second-most car-owning nation on Earth, edged out by Italy’s 89 percent auto ownership, according to new figures released last week by the Pew Research Center. Car ownership is widespread among all income groups in wealthier nations but varies with income in emerging economies; in contrast, the wealthy are as likely to own bicycles in emerging economies as are the poor, while in the U.S., where biking is more likely a recreational activity, bike ownership increases with income. The high rate of U.S. car ownership may be a function of the shortcomings of alternatives, such as the shoddy state of interurban rail.

On the Climate Solutions blog: Kristen Sheeran reviews the various carbon-pricing strategies (cap-and-trade, tax, and cap-and-dividend) under consideration in the Oregon legislature. Joelle Robinson asks Washingtonians to thank the Washington State House members who removed an $85-million coal subsidy provision from the State Senate’s transportation package. Jenna Garmon explains a City of Portland policy under consideration that would daylight energy use data for commercial buildings to encourage investment in energy efficiency and save customers money. Alex Epstein invites Seattleites to participate in a Climate Action Festival on Earth Day, April 22.