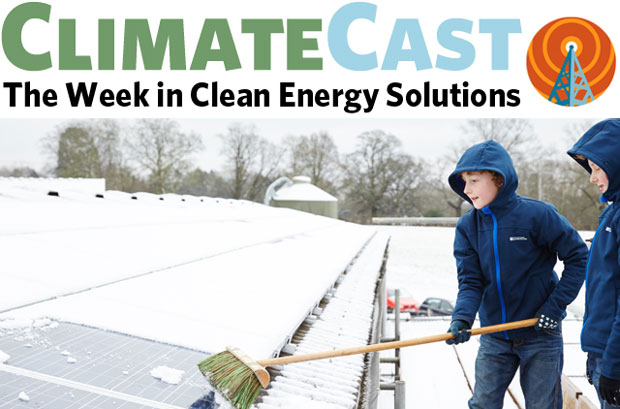 Dear readers: We are asking you for your feedback on our summary of the week’s top climate and clean energy news. Please take our 2-minute survey here.

Rapidly falling prices for electric vehicles and photovoltaics could lead to a decline in fossil fuel use starting as early as 2020, according to a new scenario developed by Imperial College and the Carbon Tracker Initiative. Even if solar and EVs occupied just 10 percent of the market, that could lead to a sharp drop in the price of fossil fuels, the study says, warning (along with Vox’s David Roberts) that other projections have underestimated the potential of EVs and PVs to disrupt energy markets. EV trends bear out the possibility: US electric vehicle sales rose 37 percent in 2016 over 2015, and January’s sales were 59 percent above the same month last year. EV battery prices have fallen by half since 2014, and the president of Audi of America told the national car dealers convention that they should embrace EVs, because he expects electric vehicles to predominate within a decade. On the supply side, Royal Dutch Shell’s CEO voiced confidence last week that clean energy will continue to grow  under President Trump, and US utilities are investing in community solar as a way to retain market share even as customers turn to PVs.

The GOP used its solid control of Congress last week to roll back protections for air, water, and disclosure adopted by the Obama administration last year. First to fall was the Stream Protection Rule, which limited coal companies’ ability to dump mining debris in streams. Next on the chopping block was a rule requiring oil, gas, and mining companies to disclose their payments to foreign governments—coincidentally on the same day the Senate confirmed former Exxon Mobil CEO Rex Tillerson as secretary of state. This week, the Senate is expected to join the House in undoing the methane rule, which requires oil and gas companies to control methane leaks and not waste natural gas by flaring it, rules that would have gained taxpayers $800 million in royalties over the next decade, besides cutting climate pollution. Senate Republicans suspended regular procedure to advance the nomination of EPA nominee Scott Pruitt to the floor despite the Democrats’ boycott of the committee vote. Assuming Pruitt wins confirmation despite growing Dem opposition to the remainder of Trump’s nominees and opposition from current and former EPA staffers, he is poised to savage the EPA while sticking to the letter of the laws it is required to enforce.

Leading nuclear power builder Toshiba is withdrawing from plans to build nuclear power plants in Britain and India, making it likely that the British project will be scrapped entirely. Toshiba warned that it expects to take multi-billion-dollar write-downs on its 2016 results due to cost overruns on reactors being built by its US subsidiary Westinghouse—a phenomenon common to most nuclear construction projects, putting financial stress on planned reactors worldwide. Exceptions to the rule include nuclear plants built by China and Korea, although two-thirds of reactors under construction worldwide are behind schedule, according to this graph from The Economist. These difficulties have bolstered the dream of smaller reactors with novel designs, leading to a new $200 million investment in reactors cooled with molten lead and pending federal legislation promoting nuclear research and waste storage. Nevertheless, given the long lead times for atomic technology and the rapid price drops in solar power, one former nuclear booster argues that its moment has passed.

As the Trump administration enters its third full week, speculation abounds about the changes his appointees will make in cherished clean energy efforts, such as the DOE’s Advanced Research Projects Agency-Energy as well as other clean energy lab programs, and the Pentagon’s dedication to the use of renewable energy, which also reduces resupply requirements. Fears about ARPA-E were stoked by the nomination of Rep. Rick Mulvaney (R-SC) to head the Office of Management and Budget, given Mulvaney’s efforts as a congressman in 2012 to slash DOE funding. As the new brooms swept the State Department and EPA websites clean of Obama’s climate policies, EPA employees resorted to encrypted messaging apps to plot their resistance from within. For a round-up of Trump’s likely impact on climate policies, see this interview with InsideClimate News editor Jack Cushman.

Oregon gets greener electricity; mobility not so much

Oregon isn’t cutting global warming pollution fast enough to meet its 2020 goal of 10 percent less pollution than 1990 levels, according to a state report released last week. The biggest failure lies in transportation, where a growing population, increased miles traveled, and a lack of improvement in fuel economy have increased emissions from motor vehicles. In contrast, trends in electricity generation are improving fast enough that Renew Oregon’s report card—also released last week—gave the state an A– for that sector, while slapping it with a C– for transportation. In Maryland, both legislative houses overrode the GOP governor’s veto to raise the state’s Renewable Portfolio Standard to 25 percent in 2020. Greening the power mix gets easier the denser the connections in the utility grid; Warren Buffett’s western utilities are seeking to join the California power market, but the multi-billion-dollar cost of transmission is facing regulatory scrutiny.

Sweden to go climate-neutral by 2045

Sweden’s Parliament voted last week to eliminate climate pollution entirely by 2045, in one of the most ambitious goals ever set by an entire nation. The vote—supported by seven parties and opposed only by the far-right Sweden Democrats—envisions an 85 percent cut in emissions, with lingering pollution offset by actions that remove greenhouse gases from the air. In the shorter term, a new report shows the EU is on track to reach its goals of using 20 percent renewable energy by 2020 and raising energy efficiency 20 percent, and the Irish Parliament voted to divest the country’s $9 billion sovereign wealth fund from fossil fuels. Meanwhile, nations continue to join the Paris agreement, with Cambodia’s ratification bringing the total to 129 countries accounting for 81.5 percent of global greenhouse pollution.

Image: Ramping up power production at a British rooftop solar installation. Photo by 10:10 UK, via Flickr.