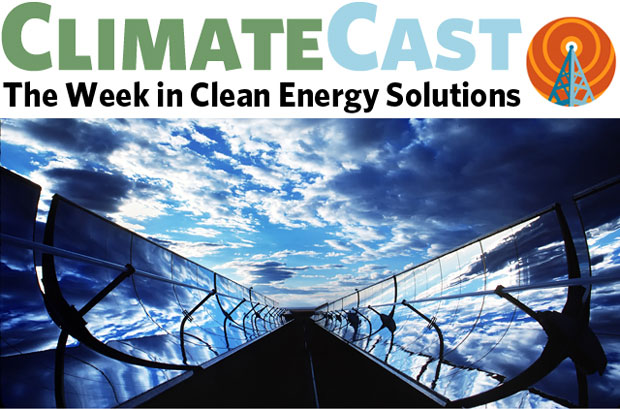 Saudi Arabia plans for its future beyond petroleum

The Saudi government approved a plan last week to swiftly transition the desert kingdom away from its dependence on oil revenues. Under the program, Saudi Arabia aims to sell a 5 percent stake in the national oil company Aramco, cut government spending on fuel and water subsidies, and invest abroad to generate lasting income. “We have an addiction to oil … this is dangerous,” iconoclastic Deputy Crown Prince Mohammed bin Salman said on national television. “By 2020, if oil stops, we can survive.” Some of the proceeds of the Aramco sale will go toward a $20 billion investment to build 9.5 GW of renewable generation by 2030.

New strides to put more sunshine on the grid

Operators of a new trough-style 50-MW concentrating solar power plant in South Africa announced that it had racked up two straight weeks of full-power operation using molten-salt heat storage. Delivering solar power on demand is only one way that planners propose to raise the percentage of electricity demand met renewably. A new German study says that demand-side management and storing heat will be adequate until 2030 to meet German clean energy goals, while a new US study says battery storage and peaker plants are more expensive than other strategies for grid integration of renewables. In Hawaii, where utilities are phasing out net metering, a new inverter is tuned for use with battery storage and the state’s new “self-supply” tariff to minimize customer bills (graphs). In Australia, a study predicts that the advent of maximum demand charges will make battery storage cost-effective for home use—a trend that a Berkeley economist sees as a backstop to high utility power prices in California, where the duck curve has deepened this year.

China last week halted approvals for new coal-fired power plants in most of the country, putting the brakes on about 200 of the world’s 1,200 planned coal generating stations—a move which will also leave more room on transmission lines for renewable energy. Nevertheless, China and India both struggle with power dispatch systems that make it hard to add solar and wind to the grid. Farther into the electrical periphery, off-grid solar finance concern SunFunder received $15 million in new financing, and Fenix International reached the 60,000 mark for leases of solar pay-as-you-go systems in Uganda. At an intermediate scale, a new study of Indian microgrids found that they don’t quite make the grade yet.

Ukraine marked the 30th anniversary of the Chernobyl nuclear disaster last week, remembering workers who died trying to contain the radiation from the devastated reactor. Radioactive contamination spread across Europe (maps) and has even tainted German wild boar that forage in forests exposed to long-lived isotopes such as Cesium-137, while wildlife have re-occupied the zone around Chernobyl closed to human habitation. Apart from 16,000 thyroid cancers, an estimated additional 22,800 cancers caused by Chernobyl are too small of an increase against background levels for epidemiologists to detect definitively, though families 100 miles away still contend with high levels of birth defects. In Virginia, Dominion Energy contemplates spending $2 billion on planning for a new reactor that might come on line in 2029 at total cost of $19 billion.

Solar power’s ballot-box appeal won recognition last week, as a credible drive to put an initiative before Arizona voters brought the state’s utilities to the negotiating table with solar installers to settle the role of third-party financing and net metering. Even in bankruptcy, solar is being treated differently than before: the SunEdison bankruptcy is being seen as simply an aggressive expansion strategy gone awry, unlike the failure of Solyndra, which was used as a political football to cast aspersions on solar technology. Of course, it’s hard to build a credible case against solar when an 800-MW solar contract in Dubai was won this week at 2.99 cents per kilowatt-hour unsubsidized.

The rights of future generations to a stable climate scored a moral victory last week when a Seattle judge ruled that Washington state must devise regulations this year to curb its climate pollution. The same judge had decided last November that the Department of Ecology’s draft rules satisfied the state’s obligations under the public trust doctrine, but lawyers for the young plaintiffs asked him to reconsider in February after Gov. Jay Inslee withdrew those proposed rules for redrafting. The ruling follows last month’s decision in federal court in Eugene that allowed a similar suit to proceed against the US government—one of at least eight Atmospheric Trust cases pending from Pennsylvania to Pakistan.

In brief: planes, drones, and photovoltaics

The sun-powered Solar Impulse 2 plane took off Monday for Arizona, where it was expected to arrive that night. It had landed near San Francisco the previous weekend after a three-day non-stop flight from Hawaii,  Meanwhile, Alta Devices announced that its new solar cell had reached a record 31.6 percent efficiency. Though incremental efficiency gains aren’t so critical on rooftops, they are a particular boon for solar-powered aircraft, including drones that stay aloft indefinitely for surveillance and communications.