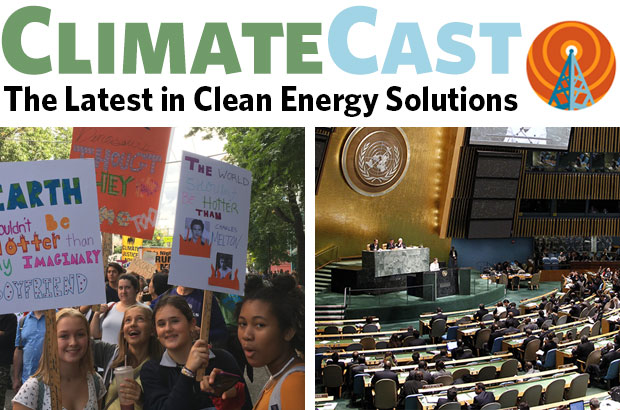 Swedish climate activist Greta Thunberg and other youth climate activist leaders have inspired youth across the globe to speak up and push for action to address climate change. On September 20th millions of adults across the globe took to the streets from  classrooms, homes, and workplaces to join the youth-led climate strike. Over 2,500 events took place in more than 163 countries on all seven continents. In total, more than seven million people participated on the 20th with an additional two million the following Friday. Notable cities included Italy, with over one million people, and New Zealand, where more than 3.5 percent of the country’s population participated. These events have been the largest demonstrations ever in the fight against climate change.

In Climate Solutions' home states, tens of thousands of youth led a strike through the downtown Portland, OR core urging policymakers to declare a climate emergency and “adopt a climate-test policy that requires every decision by City Hall to consider and prioritize the Earth's health,” among other demands. In Seattle, over 3,000 Amazon employees left their jobs at company headquarters to protest Amazon’s inaction on climate. Their activities were coincided with CEO Jeff Bezos recent announcement of a new company plan to tackle climate change. The plan commits Amazon to meeting the goals of the Paris climate agreement, to measure and report its emissions regularly, to implement decarbonization strategies, and to offset its remaining emissions.

Prior to the climate strike events, Greta Thunberg and other youth addressed Congress, urging them in blunt terms to stop talking solutions and start taking action, including  immediate action from the world’s governments to drastically reduce fossil fuel use. She also addressed world leaders at the UN climate action summit in New York City, accusing them of blatantly ignoring climate science. Youth actions not only drew attention to the climate crisis, but to the young people behind the climate movement. The global climate strikes are part of a movement whose momentum continues to build; a new poll finds that one in four teenagers have already participated in a walkout, written a letter to lawmakers, or attended a climate rally. So what’s next? Where do we go from here? Check out this Climate Solutions blog for ways you can help keep the momentum going if you’re in Washington State. Visit the Global Climate Strike website for more information on what’s next for the movement, and what you can do to support it.

The UN Intergovernmental Panel on Climate Change (IPCC) released a new report offering the most dire climate warnings issues to date: how climate change impacts Earth’s oceans and the cryosphere (an all-encompassing term to describe the frozen water part of the earth’s system). The report, compiled by 104 scientists from 36 countries, reviewed existing research and found changes to the oceans over the next century will be “unprecedented”--becoming warmer, more acidic, and less able to hold oxygen. Ocean heat waves will become increasingly common, as will extreme El Niño and La Niña systems, leading to increased extreme weather around the globe. The report forecasts that by 2050, hundred-year floods will become annual occurrences in some cities and small island nations,estimating by the end of the century, global sea levels could rise by more than three feet (12% higher than 2013 estimates). IPCC explains we can still stave off the worst impacts with a 45% reduction in global emissions by 2030.

A new clean energy project is growing underground--that is, the London Underground. Hot water heated by the Underground will be piped into an existing system that harvests waste heat from a power plant, helping to heat local businesses and homes. The temperature inside a London Underground car can climb as high as 100 degrees, even during the winter. Also in the UK, British-Dutch consumer goods company Unilever announced that its operations are now fully powered by clean energy on all five continents in which it operates. From its factories and warehouses to its data and distribution centers, the company is working to achieve 100 percent carbon neutrality by 2030.

A new report on the global e-bus landscape has found that global electric bus adoption is set to triple by 2025 driven byclean transportation policies and declining battery prices. Ford and GM will also their most popular pickup models electric--the Ford F-150 pickup and the Chevrolet Silverado. And the first electric “gas” station just opened up in Maryland, featuring four charging stations that will allow customers to charge up in just 20-30 minutes.

In solar and wind news, both industries have outgrown a need for subsidies. After decades of tax breaks and other incentives, solar has been deployed so widely that costs are the lowest ever, dropping 85 percent since 2010. Wind power costs have fallen by 50 percent since 2010. These price drops now make them cheaper than new coal and gas plants in two-thirds of the world, as reported by BloombergNEF.

A ten-year analysis of the Regional Greenhouse Gas Initiative (RGGI) found that climate emissions from power plants in states regulated by the program have fallen 90%faster than in the rest of the country. Notable is the outpaced economic growth in RGGI states--upwards of 31%. In Virginia, Governor Ralph Northam signed an executive order setting a state goal to produce all electricity from carbon-free sources by 2050. Florida’s legislature proposed its own 100 percent clean energy law last year, but the bill did not pass. But now, Democrats have re-filed the initiative for the 2020 session, noting a “shift in tone” among state GOP lawmakers on climate change. Given that Florida is the Sunshine State, it’s surprising to learn that the state has been reluctant thus far to embrace its solar energy potential. For a closer look at which states are generating the most wind and solar, check out this piece in Forbes.

The Clean Air Act allows individual states to apply for a waiver and create their own stricter air pollution standards. Last month in response to California’s efforts to enact stricter fuel economy standards, the Trump administration  revoked the waiver that had previously allowed states to set their own emissions standards. Automakers, consumers, public health groups and others responded by voicing support for California’s efforts to create stronger, clean car standards. Ford, Honda, BMW and Volkswagen are among the car manufacturers who committed  to stick to the stricter CA standards despite Trump’s opposition. Now the EPA is threatening to withhold federal highway funding from the state with California Governor Gavin Newsom responding the state “won’t be intimidated by this brazen political stunt.” California’s Attorney General has filed a lawsuit, along with 23 other state attorney generals, to challenge the Trump administration’s decision to revoke the state’s waiver.

10,000 U.S. farmers and ranchers have come out in support of a national Green New Deal. The new coalition, Farmers and Ranchers for a Green New Deal, will lobby Congress and work with communities to advocate for a clean energy economy. The coalition is dedicated to “revolutionizing farming practices in the U.S.,” advocating for regenerative agriculture and other measures to make farms more resilient against extreme weather events, like the historic flooding that devastated much of the farmland in the Midwest.