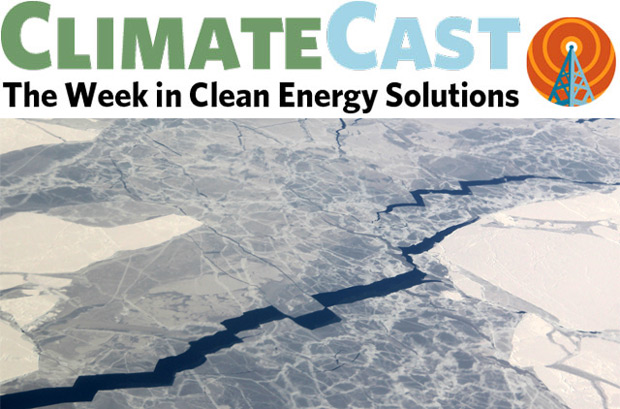 Lawmakers in Sacramento passed a watered-down climate package Friday, bowing to oil industry pressure to reject a provision that would’ve halved the state’s petroleum use by 2030, and refusing to extend the state’s carbon cap beyond 2020. The package does require that half the state’s electricity be generated renewably by 2030, and cuts building energy use in half—landmark achievements in their own right. The legislation came as a study of oak tree rings showed California is drier than it’s been since the 1500s, and a new wildfire ballooned to 50,000 acres, ravaging towns and forcing thousands to evacuate, one of whom videotaped his belated escape through the flames.

Solar photovoltaic power in the U.S. has surpassed the 20-gigawatt mark, according to a new report, and an average of 1 gigawatt per month will likely be installed through the end of next year. Those 20 GW are five times the total at the end of 2011. On the Hawaiian island of Kauai, where solar supplies up to 95 percent of daytime electricity demand, the utility co-op is planning a 13-megawatt solar-plus-storage project to provide clean power into the evening. The wind industry is preparing for a fight to extend the 2.3-cent-per-kWh production tax credit, projecting that 2 to 6 GW more windpower will be installed by 2020 if the credit continues.

Utilities slouching toward Bethlehem to be reborn

The notion of “baseload” electric power stations is outdated, said Steve Holliday, CEO of National Grid, which supplies gas and power to the UK and northeastern US. His outlook imagines a role for utilities that diverges from their 20th century origins, whose obsolescence David Roberts chronicled last week, while also reimagining how the electricity business can be reinvented thanks to smart metering, power controls, demand management, and decentralized generation. It isn’t just a thought experiment: New York state has approved plans for 83 microgrids, and National Grid’s Holliday predicts that small-scale, distributed generation will provide one-third of the UK grid’s capacity by 2020—quadruple where it stands today.

Burning it all means melting it all

If humans burn all of the world’s known oil, gas, and coal deposits, the entire Antarctic ice cap would melt and oceans would rise some 200 feet, according to research published last week. The melting, which would leave the polar continent ice-free as it was 35 million years ago, would lift sea levels by about one foot per decade. In another indicator of warming, Australian scientists found that heat records are being broken 12 times as often as records for cold. Both U.S. coasts faced unseasonably late heat waves, and models predicted that if climate pollution continues, Seattle’s municipal water supply will be cut in half by the end of the century.

The plight of the unloved coal plants

France last week stopped giving export credits for new climate-polluting coal projects, and will use that credit to support renewable energy projects instead. In Ohio, the utility FirstEnergy is worried its coal plant will get out-competed in the state’s power market, so it asked regulators to force customers to purchase its electricity for the next 15 years, a request the utility commission seems unlikely to grant. In the Northwest, Puget Sound Energy is grappling with its stake in the Colstrip, MT coal plant. Legislators punted the issue in this year’s session; now NGOs and a dozen lawmakers have asked regulators to weigh whether closing it would be better for ratepayers.

A band of climate-conscious Republicans are tossing softball questions to GOP presidential hopefuls to coax them toward uncontroversial climate positions, such as support for clean energy. In Congress, a tiny group of Republicans are preparing a resolution to acknowledge humans’ role in climate change, but the GOP leadership is undercutting the Obama administration’s climate diplomacy by telling foreign leaders his commitments could be reversed. After GOP candidate and neurosurgeon Ben Carson disclaimed knowledge of science linking human activity and climate change, Calif. Gov. Jerry Brown sent him the IPCC climate reports. Climate deniers got a more sarcastic response in the hilarious video, “How Climate Change Deniers Sound to Normal People.”