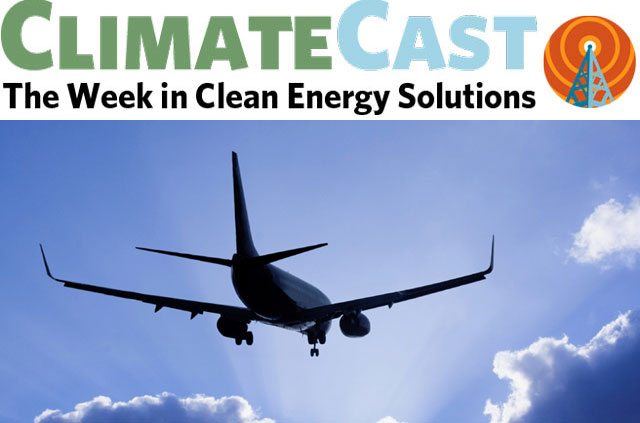 Consumption of solar energy keeps rising, despite cheap natural gas, slashed subsidies, and bankruptcies of solar companies, according to a report from McKinsey & Company. The pace of solar installation worldwide has grown at over 50 percent per year since 2006, as costs have plummeted by about 30 percent annually over the last five years, and a new U.S. home or business goes solar every four minutes. With the cost to consumers poised to fall from $4 per peak watt last year to $2.30 by 2015 and $1.60 by 2020, McKinsey forecasts new solar installations at a pace that will likely disrupt utilities’ business models.

British Airways has agreed to buy jet fuel produced from post-recycled waste at a former oil refinery in Thurrock, Essex. The plant is set to come on line in 2017 and will convert approximately 575,000 metric tons of waste into 120,000 tons of clean-burning liquid fuels. The fuel that British Air purchases will be the equivalent of taking 150,000 cars off of the road. In the meantime, the European Union approved a law setting common technical standards for clean fuels and encouraging stations to offer alternative vehicle fuels, in a further move away from fossil-fuel-based mobility.

U.S. greenhouse gas emissions fell in 2012 to the lowest level in 20 years, according to the annual tally released last week by the Environmental Protection Agency. The decline leaves the nation’s output of climate-altering gases 10 percent below 2005 levels, which should in theory put it well on the way to meeting the goal of a 17 percent reduction from that benchmark by 2020. But analysts attribute the 2012 drop to a warmer winter, a shift from coal to natural gas power plants, and more efficient autos — only the last of which is likely to yield continued declines.

Natural-gas drilling causes more harmful, unintended consequences for the climate than previously thought, according to a study published last week by the National Academy of Sciences. The study measured methane emissions over Pennsylvania’s heavily fracked Marcellus Shale region and found that 100 to 1000 times as much methane was escaping during drilling than regulators had thought. Because methane traps heat much more powerfully than carbon dioxide, high levels of methane leakage can outweigh the climate benefits of substituting natural gas for coal. Colorado and Ohio are the only states that currently regulate methane leakage; federal rules are due in 2016.

More ways to find the capital for clean energy

Innovative clean energy financing ideas were back in the news this week, with a Brookings Institution-Rockefeller Foundation report on how state and local agencies can use public finance bonds to create a new clean-energy asset class to fund clean energy projects.  Meanwhile, nonprofit Keeping PACE in Texas released “PACE in a Box,” a toolkit for the country’s most electricity-hungry state to finance low-carbon improvements through commercial property-assessed clean energy financing, which recoups the cost of the upgrades over time on the owners’ property tax bills.

The Obama administration announced Friday that it will extend a deadline for federal agencies to weigh in on the controversial Keystone XL pipeline, pushing back the ultimate decision on the project until after the November mid-term elections. The decision drew criticism from opponents and supporters of the project alike, with supporters bemoaning the now six-year-long review process, and opponents lamenting the lack of decisive climate action embodied by the delay. Some pundits speculated, however, that the postponement might heighten the controversy over the project, while others saw a benefit to Democrats in deferring a decision sure to alienate one bloc or another of the party’s base.

New York City buildings could save nearly $400 million annually just from three straightforward changes in how the buildings are maintained and operated, according to an analysis released last week by the Building Genome Project. The project uses hundreds of markers of equipment and operations that affect building performance to model energy use and efficiency improvements from measures such as window retrofits, fuel switching, and thermostat adjustment. While the results aren’t reliable for individual buildings, they offer a view into what can be achieved with city-wide energy improvements.