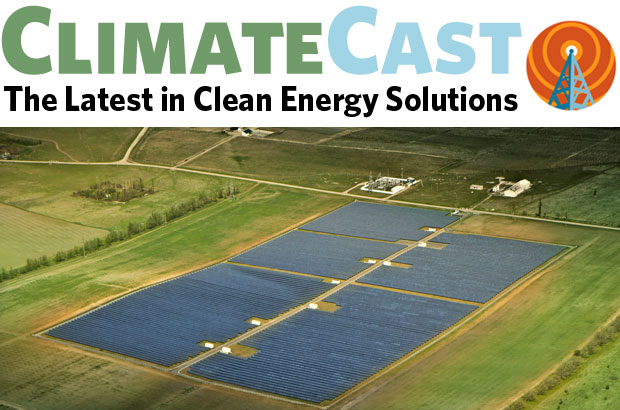 Renewables around the world

Renewables continue to establish themselves and break records in places previously dependent solely on fossil fuels. Coal-reliant Bosnia now has its first wind farm, which will generate enough power to supply 27,500 homes. In Britain, wind power just broke another record, generating over 34 percent of domestic power generation one day earlier this month. India is gearing up to break its own record; the country is currently constructing one of the biggest solar parks in the world. When completed, it will produce enough electricity to power 700,000 households. Egypt also recently completed its own solar park in a remote desert complex, reducing the most populous Arab nation’s reliance on fossil fuels.

In the US, solar shines -- even in a former coal mine

A site in Washington State where dirty coal was once mined may soon be better known as a place where clean solar is harnessed. The former Centralia Coal Mine (closed in 2006), could become the Tono Solar Project, creating 300 jobs during construction and generating 180 megawatts of electricity. Georgetown, Texas (population 67,000) has now become the largest US city to be powered entirely by renewable energy. The city’s Republican mayor, a former CPA, backed the switch because renewables would save ratepayers and the city money. Georgetown’s story is a powerful testament to the fact that clean energy adoption doesn’t have to be dictated by politics, but rather by sound economics. Florida Power & Light is similarly investing in solar, and in battery storage too. It’s latest facility is thought to be the largest solar plus storage installation in the US. In Puerto Rico, six months after Hurricane Maria, entire towns still remain in the dark. Smart solar grids are now emerging not only as a way to turn the lights back on, but to make the country’s power grid more resilient for future extreme weather events.

What will be our future if we don’t act on climate? A series of new reports paint a picture of this reality, and it’s a dire one. The World Water Development Report analyzes stress on rivers, lakes, aquifers, wetlands and reservoirs. The most recent report predicts that more than five billion people could suffer water shortages by 2050 due to climate change. A World Bank report found that more than 140 million people in three regions of the developing world are likely to migrate, due to climate change. In sub-Saharan Africa, 86 million are expected to be displaced. In South Asia, 40 million. In Latin America, 17 million. And a WWF Report predicts catastrophic losses of as much as 60% of plant species and 50% of animal species by the end of the century in the world’s greatest forests, from Africa to the Amazon. But what happens in the future if we do act on climate change? According to a new study out of Duke University, action to curb carbon pollution would save around 150 million lives. Asian countries with polluted air stand to see the most improved health outcomes. While global carbon emissions hit record high in 2017, the world’s two biggest emitters, China and the US, saw emissions decline thanks to clean energy development. There’s time to turn the tide, but we must act quickly.

Resistance comes in many forms. In British Columbia, First Nations elders are holding ceremonies to protest a pipeline expansion. Volunteers have constructed a traditional cedar watch house as part of a direct action campaign to stop construction of the Kinder Morgan trans Mountain pipeline. Washington State Governor Jay Inslee, said on record that his state is “allied” with British Columbia in questioning whether the pipeline should be expanded. Scientists from 22 Commonwealth countries are calling for urgent climate action, saying countries need to do more to reduce emissions overall and achieve net-zero emissions for the entire second half of the century. In new efforts to hold polluters accountable for climate damage, the Philippine Commission on Human Rights has launched an inquiry to determine whether oil, mining, gas, and cement corporations are responsible for extreme storms like Typhoon Ketsana, which killed approximately 500 people and was one of the most devastating typhoons to ever hit Manila.

In brief: Electrify everything

This week in Vox, David Roberts makes a powerful argument on why large-scale electrification for the grid makes sense for ratepayers, a stable climate, and especially utilities. He questions why this isn’t happening already, and what steps utilities, lawmakers and individuals can take to get us headed in that direction.