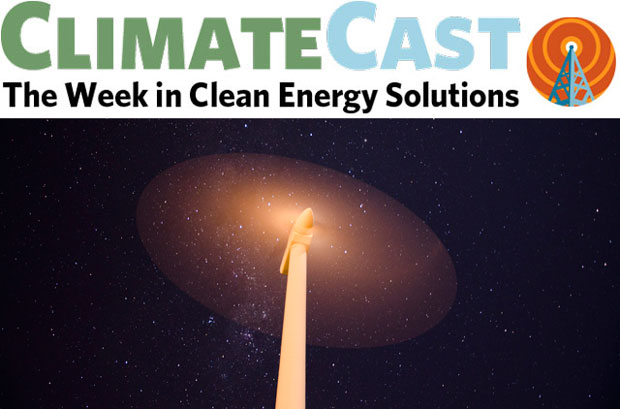 President Obama’s rejection of the Keystone XL pipeline last Friday unleashed a torrent of punditry about the victory’s meaning for the climate and its activists after seven years of organizing and alliance-building against the first project ever stopped because of its climate impact. The Alberta oil industry saw renewed reason to promote alternative pipelines, but the four possible routes also face roadblocks, and existing capacity leaves little room for new tar sands development. Republicans urged proponents to keep their hopes alive until 2017, and TransCanada suggested it may yet re-apply. But the bigger impact of the anti-Keystone campaign was in using a concrete fight to energize climate activism, a point that is lost on those who see climate policy only through the lens of quantifiable emissions cuts, says Vox’s David Roberts.

Solar and wind developers offered the cheapest power in a Chilean utility auction last month, with unsubsidized bids under 8 cents per kilowatt-hour that froze coal plants out of the competition entirely. The outcome mirrored an auction in India last week, where solar’s SunEdison won a 500-MW auction at 7 cents per kWh, at or slightly below the price for coal power. In Texas, where wind generation set a 12-gigawatt record last month, wind power is so plentiful at night that one utility offers its customers free electricity after 9 pm—fulfilling the promise of power “too cheap to meter” that the atom never delivered.

The clamor over what #Exxonknew got real last week, when New York’s attorney-general issued an 18-page subpoena for the firm’s relevant records going back to 1977. The inquiry prompted speculation that the investigation could spread beyond ExxonMobil and comparisons with charges leveled at the tobacco companies for pretending their products weren’t harmful. In other accountability moments, VW’s emissions scandal grew to include CO2 emissions from some gasoline cars, and coal giant Peabody settled a suit by agreeing to disclose its risks from climate rules — hazards that must be evident by now to all sentient investors. French oil firm Total hedged its climate risk by investing in solar, a decision Exxon rejected a generation ago, correctly anticipating that solar would only become cost-effective in the 2010s.

Loans for oil and gas projects face increased risk of default, a federal bank regulators’ report said last week. Credit analysts identified $34 billion in risky lending, which amounts to 15 percent of the loans in that sector, quintuple the 2014 level. Clean energy faced its own financing hurdles because an expected increase in interest rates eroded the feasibility of yieldcos, which buy clean energy projects and pay investors a dividend from power sales. Other investors, such as utility holding companies, are buying the projects instead. For building retrofits, PACE programs are raising $1 billion this year in loans repaid on owners’ property tax bills.

Coal consumption is dropping at its fastest pace on record, according to new figures compiled by Greenpeace. After plateauing last year, combustion of the black fuel appears to have fallen 2.3 to 4.6 percent in the first six to nine months of 2015, led by declines in China and the United States. Although China’s state-owned utilities continue to build new coal plants at the rate of one a week, the report asserts these new generators remain idle. In the US, emissions from coal-fired electric plants are on track to fall below 2 billion metric tons for the first time since 1995, according to a Bloomberg-Sierra Club analysis.

As rooftop solar burgeons, consumer advocates are digging in to support net metering, with 130,000 petition signatures delivered to California regulators last week and charges that utilities are “trying to kill rooftop solar.” Although net metering couldn’t survive if everyone generated their own electricity, battle lines are drawn over what should supplant it, particularly as solar-plus-storage gives customers more flexibility over when they use power from their roof or the grid. Avoid fixed charges, pay for solar based on its value to the grid in the moment, and develop new formulas to set utility revenues, says a new Ceres report. In North Carolina, Duke Energy wants regulators to fine a church for getting its power from a third party’s solar array—a move that seems sure to earn the utility bad publicity.

Most Americans believe human activity is already influencing the climate, but fewer than a quarter are very worried about it, according to an Associated Press poll. Papal pronouncements have had some impact, with 10 percent more US Catholics telling pollsters that the climate is changing than did last spring. In a 40-country public opinion survey by Pew, more than half perceived climate as a “very serious” problem, and over three-quarters supported an international treaty to cut greenhouse gas emissions. Citizens’ sense of urgency on climate varied widely, with concern generally lower in more polluting countries. Nevertheless, Chinese and Americans both supported a Paris agreement at rates of about 70 percent.

Image: A wind turbine against the night sky. Photo by Andy McDowall, via Flickr.