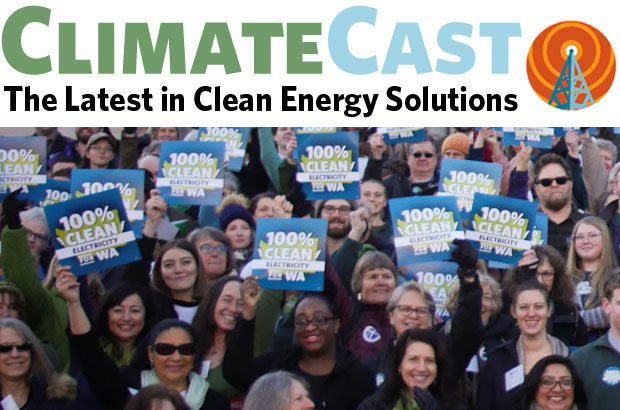 Washington State just made history, becoming the first state in the Northwest and fourth state in the country to commit to 100% clean energy. The landmark legislation will eliminate coal power completely by 2025 and transition the state’s electricity grid to 100% clean electricity by 2045. Governor Inslee is expected to sign the bill next week, along with a slew of other clean energy-focused bills. Washington’s new clean electricity legislation is the strongest such plan in the country, and shows leadership in how it promotes equity: accounting for the social costs of carbon, reducing energy burdens to vulnerable communities, and providing energy assistance to low-income households. Labor voices across the state gave 100% clean electricity their support, including from the Washington State Labor Council.

Solar power capacity has more than doubled in many American cities

Solar power capacity has more than doubled in America’s largest cities. An estimated one-third of U.S. cities have as much as quadrupled their photovoltaic capacity, including New York City, Seattle, and Dallas. In Maryland. Johns Hopkins University will supply two thirds of the energy on its campuses with solar, marking one of the most significant pledges to clean energy in higher education. A new community solar project in Snohomish County, Washington will soon be the largest in the state, making solar more accessible to more people, including renters and those whose homes are not ideally situated for solar panels. Under the project, ratepayers can opt to participate in as little as one sixth of a panel, and receive credits on their bills for two decades. Down under, Australia launched the world’s first solar-powered train, showcasing the potential for a zero-emission public transport future.

States and cities across the country are taking bold action to reduce their carbon footprints and transition to clean energy. On Earth Day, Nevada signed a bill that sets a goal of getting all of power from carbon-free sources by 2050. The bill requires 50 percent of electricity supply come from renewables by 2030. In Oregon, many youth spent their Earth Day urging lawmakers to pass the Clean Energy Jobs bill, a job to cap and price climate pollution from the state’s largest emitters, presenting a petition with over 1,000 youth signatures to Oregon Governor Brown and legislative champions. San Francisco announced a new plan to power all commercial buildings 50,000 square feet or larger with renewable energy by 2030, helping the city reach its goal of using only renewable electricity citywide by 2030 and becoming carbon neutral by 2050.

In just three years, electric cars will be cheaper than gas cars

Battery prices are falling more quickly than experts anticipated -- so much so that Bloomberg NEF has had to update their global long-term EV outlook forecast each year. The research firm now projects that electric vehicles will be cheaper than traditional combustion engine vehicles within three years. Ford announced that it will invest $500 million in electric vehicle startup company Rivian to develop a new electric vehicle, expanding its electric transition from its already planned release of a Mustang-inspired crossover and a zero-emission F-150 pickup. Portland, Oregon transit agency TriMet introduced its first all-electric bus, powered by wind --the first step in transitioning to a clean bus fleet. Also in Portland, Daimler Trucks North America will begin manufacturing electric trucks. The trucking company cited the city’s proximity to California, where rigorous air-quality standards have upped the demand for zero-emission commercial vehicles. West Coast electric utilities have noted the increased demand too, and are working together to study how to prepare Interstate 5 for electric freight vehicles.

A new national poll shows nearly half of young people between 18 and 29 consider climate change to be a crisis requiring urgent action. Over 3,000 scientists signed a letter in Science Magazine expressing support for youth activists across the world working to spur climate action, calling efforts to stop global warming a "social, ethical, and scholarly responsibility." In London, Extinction Rebellion has organized direct action protests across the city to bring attention to the climate crisis. Thousands have participated in the group’s events across the city. Extinction Rebellion’s core message is that climate change is an emergency that threatens the survival of the human species. Thirty central banks have jointly called for measures to spur green finance and better assessment of the risks from higher global temperatures.

Weeks after a cyclone killed over 1,000 people, Mozambique gets hit again

Just six weeks after Cyclone Idai hit Southest Africa, killing more than 1,000 people, another storm has killed dozens of people in Mozambique and left tens of thousands without homes. Cyclone Kenneth is one of the strongest hurricanes to ever make landfall on mainland Africa, and only the second Category 4 storm ever to strike Mozambique. Support has been hampered by torrential rain continuing into this week, and authorities are bracing for landslides, lack of clean water, and a potential cholera outbreak. These climate-related disasters are anticipated to aggravate food insecurity and could result in a new wave of humanitarian disasters.

In Brief: Why the US bears the most responsibility for climate change, in one chart

A new chart with countries’ contributions to climate change since the start of the Industrial Revolution shows that the U.S. is by far the biggest emitter on the planet. It shows that the worst polluting countries are not the most populous, but the most economically powerful.

P.S.: Join us in Seattle for our annual breakfast!

Climate Solutions' Annual Breakfast in Seattle has become a premier event in Washington bringing together leaders and supporters from the business and clean tech sectors, academia, policy and political sectors, climate advocacy community, and more. It is a great opportunity to connect with others, to support Climate Solutions' critical work throughout the Pacific Northwest, and to get a healthy and needed serving of hope and inspiration in this age of climate consequences. Learn more and register here.