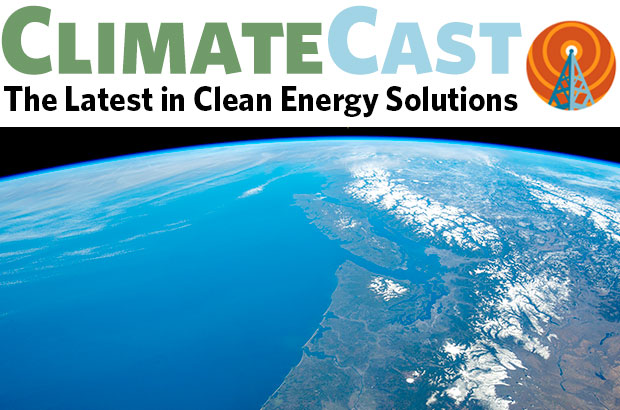 New solutions for a changing climate in the Pacific Northwest

A new analysis of U.S. weather data revealed that two of the fastest warming counties in the country are located in Southeastern Oregon. Lake and Harney counties have seen increases of 3.8 and 3.9 degrees Fahrenheit since the early 20th century. Eastern Oregon is also disproportionately impacted by wildfires and wildfire risk, related to  the region’s summers that have warmed at more than twice the global rate over the past 40 years. Wildfires in the Pacific Northwest have increased in number and size, with a recent case study on Eastern Washington found an annual increase in the average acreage burned per fire. But the Pacific Northwest is not waiting for federal action to tackle the climate crisis. The Seattle City Council recently passed a unanimous resolution in support of a local Green New Deal, joining other states and cities who have explored or taken similar efforts. And though the Oregon legislature most recently made headlines for its failure to pass landmark climate legislation, state lawmakers did pass a bill that establishes an ambitious statewide timeline for adopting zero-emission cars, buses, and commercial vehicles.

Stanford University researchers have developed a durable, low-cost battery that runs on saltwater. The batteries can store excess wind and solar power to be deployed to the grid as needed. The new battery is cheaper to produce and longer lasting than traditional lithium-ion batteries. Researchers believe the prototype battery could easily be scaled up for grid storage. A Colorado coffee shop has invented a new way to roast beans using solar equipment. The method is similar to shining sunlight through a magnifying glass. In Wisconsin, Organic Valley has reached its 100% renewable energy target setin 2017. Organic Valley is the largest cooperative of organic farmers in the U.S. In Marin County, California, homeowners and businesses with rooftop solar are getting some green for going green: their local utility company, MCE, paid out more than $673,000 to customers for extra electricity their systems produced in the last year. And the California Air Resources Board recently announced that emissions fell one percent in 2017 , putting the state well past its 2020 goal of reducing greenhouse gas levels to 1990 levels. California isn’t the only state where smart clean energy policy is making a difference; a new Clean Energy Scorecardreports that overall, the US is upping efforts to advance renewables, and that Seattle and Portland are among the highest ranking cities for U.S. clean energy use.

More new EVs, used EVs and chargers for them all

As electric car use increases, so also does the need for  electric vehicle charging infrastructure and states are responding positively in a number of ways. In Maine, the state will use Volkswagen settlement funds to add new public charging stations, while a ratepayer-funded state program will build out a network of fast-chargers on busy highway corridors. Maine is also enacting new rebate incentives for all-electric and hybrid plug-in vehicles. Nissan and EVgo will install 200 new fast chargers throughout the U.S., while utilities are increasingly doing their part to install new EV chargers in rural areas. New data also shows used EVs are increasing in popularity and sales, following increasing sales in the new EV market. .

Greater indication of a climate emergency: recent headlines from the Arctic

Things are not going well up north. While summer wildfires in the Arctic are not completely improbably, the amount and intensity of wildfires in 2019 is alarming. Arctic wildfires are releasing as much carbon this summer as the country of Belgium released throughout an entire year. Meteorologists, who have been hesitant to name climate change in their weather reports, are becoming increasingly willing to make the connection publicly. Most recently, the head of Russia’s meteorological service credited global climate change as a factor behind the country’s wildfires. In Alaska, the National Weather Service reports that all sea ice within 150 miles of the state’s shores has already completely melted away, marking the earliest known occurrence of this phenomenon. People living in the Arctic report climate change impacts their daily lives. A first-ever poll reveals that 76 percent of Greenlanders say they feel the impacts of climate change directly, from harm posed to regular sled-dog travel routes, to threats to food security and increased anxiety and emotional distress over climate change. The impacts of the Arctic don’t end in the Arctic either: scientists and experts report that Arctic climate impacts could have ripple effects that accelerate temperature increases across the world.

A new study found that increasing renewable energy in Rust Belt states is not only good for our climate, but good for public health too. The study found that maintaining current Renewable Portfolio Standards in Ohio, Pennsylvania, Wisconsin and other nearby states could would bring health benefits of $4.7 billion in 2030. Strengthening renewable mandates to 20% would bring $13.5 billion in public health benefits, and doubling the amount of required renewables would result in $20 billion in health benefits. This study comes shortly after Ohio's governor signed a law weakening state renewable requirements, and amid the federal government’s continued efforts to roll back Obama-era renewable initiatives.