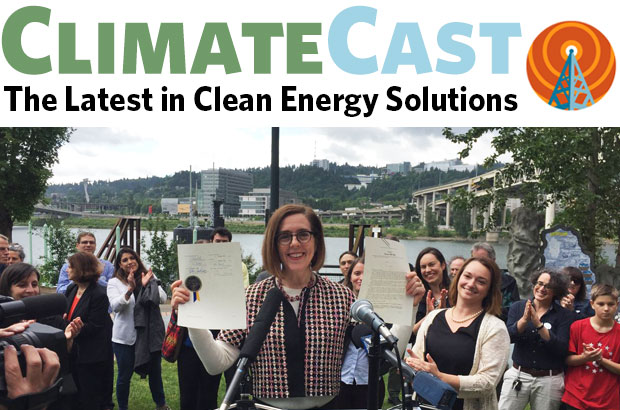 OFFICE OF THE GOVERNOR
Supreme Court ruling is good news for clean fuels
Devon Downeysmith
May 30, 2019

The Clean Fuels Standard decreases transportation emissions by requiring out-of-state oil companies to reduce the amount of carbon pollution they emit by 10 percent in 10 years, either by blending cleaner fuels into their fuel mix, or offsetting their pollution by investing in zero-emission transportation fuels and technology. The policy has already helped reduce transportation fuel pollution by over 2.73 million tons -- the equivalent of removing 580,000 cars from the road for an entire year. The U.S. Supreme Court ruling may help clear the path for more states to adopt similar programs.

States stepping up for climate

Oregon Governor Kate Brown recently signed the Environmental Protection Act, maintaining Oregon’s clean air and clean water protections at their current level, regardless of whether the federal government rolls back current protections. Two days following an investigative story by The Oregonian that exposed two Oregon universities’ relationship with the Alliance of Western Energy Consumers (AWEC) -- a group that finances opposition to progressive climate policy -- both universities ended their AWEC memberships.

Across the country, states are taking bold environmental and climate action to help counter the Trump administration’s deregulatory agenda. In Maryland, Governor Larry Hogan signed into law the state’s strongest-ever legislation to fight global warming. Despite signing the bill into law, the Republican governor voiced one strong concern against it: its clean energy target isn’t strong enough. He advocates instead for 100% renewable energy in the state by 2040.

Meanwhile, Texas’ state Senate has passed a disturbing new law: protesting oil and gas infrastructure will now be a crime, punishable with up to a year in prison and $10,000 in fines. Even the “intent to impair or interrupt” operations could still result in a $4,000 fine and a year behind bars. Texas is one of five states to enact this type of law. At a recent shareholder meeting, Amazon employees and investors voted to adopt a serious plan to address climate change. But the proposal failed, and CEO Jeff Bezos refused to even come out on stage to address his employees’ concerns.

A new report reveals that single-use plastics are accelerating climate change, and says they should be “urgently halted.” If we continue consuming plastic at our current pace worldwide, experts say that by 2050 plastic will be responsible for up to 13% of the world’s total “carbon budget” – equivalent to 615 coal-fired power plants. Currently 99 percent of plastic is made from fossil fuels. And scientists have tracked the use of a powerful pollutant that was banned years ago but mysteriously increasing in recent years. Scientists noted a 40 to 60 percent global increase in trichlorofluoromethane (CFC-11), a chlorofluorocarbon, originating in China. CFC-11 destroys the ozone layer, and is a climate pollutant approximately 5,000 times more potent than carbon dioxide.

Beyond incentives encouraging individuals to commit to electric cars, converting fleets of cars and trucks to electric is where the real transformation of vehicle transportation is.  A utility in Southern California has rolled out a new program to help advance the electrification of medium-and heavy-duty vehicles, including buses and tractor trailers. The Charge Ready Program will install electric charging infrastructure for commercial customers at no charge, supporting the electrification of nearly 9,000 fleet vehicles. Manufacturer Mercedes Benz recently pledged to make its cars carbon-neutral within two decades, setting a more aggressive target for themselves than several of their competitors who made similar announcements in recent months.

Hey Agency, what happened to “Protection?”

The EPA announced on its website that it will no longer fund research into childhood environmental health hazards. Past EPA research projects have helped uncover the health risks that pesticides, air pollution and other hazards pose to children and fetuses, often leading to increased regulations of those hazards. The EPA also refused to provide expert testimony at a recent House committee hearing on the impacts of toxic mercury pollution. The chair of the House Energy and Commerce Committee’s Oversight and Investigations panel (which oversees the EPA), responded that the agency’s refusal to provide testimony leaves them with “serious questions” on whether the agency is seeking to serve the public interest at all. Another recent headline underscores why the EPA research and enforcement is so important to public health; as vehicle pollution has declined in California by 20 percent over the last two decades (due to stricter regulations) the state has seen a 20 percent decline in new asthma cases in children.

New data shows that last year, for the first time since the 19th century, more coal plants were shuttered than new projects approved. The Institute for Energy Economics and Financial Analysis told Bloomberg that, “if closures stay where they are, we’re at peak by 2021.” Even BHG Group, the world’s biggest miner, agrees. The company’s CEO recently told investors that coal will be phased out sooner than expected, which is why the company is shifting its growth into commodities tied to clean energy electric transport. And as part of its plan to reach 100 percent carbon-free electricity by 2050, Xcel Energy (a utility that provides energy to eight Western and Midwestern states) announced it will close its last two coal-fired power plants in Minnesota by 2030, a decade earlier than scheduled. Cloud Peak Energy, the third-largest coal company in the country, has declared bankruptcy. Declining demand and increasing debt were cited as contributing factors. More than 1,000 workers are now uncertain about their future. Finally, Germany (one of the largest consumers of coal in Europe) has vowed to make Germany carbon neutral by 2050.