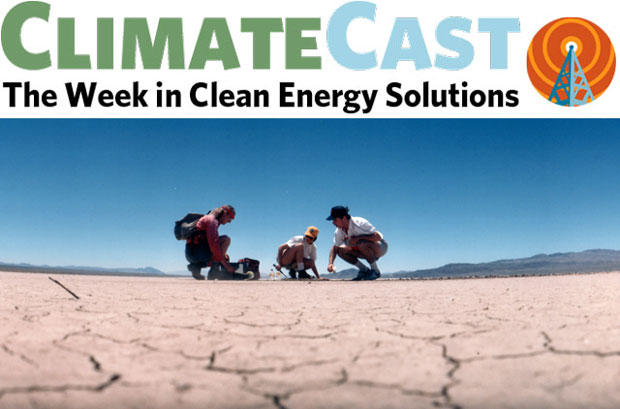 The U.S. pledged last week to reduce its emissions of greenhouse gases 26 to 28 percent below 2005 levels by 2025, ahead of December’s Paris climate talks. Russia and Gabon weighed in last week with their commitments as well, while reports surfaced that Canada had rebuffed an American invitation to make a coordinated announcement with Mexico and the United States. Senate GOP leader Mitch McConnell warned foreign negotiators that a climate deal might not outlast the Obama administration, a poll found that 72 percent of likely American voters, including a slim majority of Republicans, think the US should sign onto an international climate pact.

California Gov. Jerry Brown last week ordered a 25 percent statewide cut in water use in the face of a drought that left the snowpack at a record-low 5 percent of normal (see slider image). The restrictions spare agriculture from the cuts, even though farming uses 80 percent of the state’s water supply, and have triggered debate over what the prospect of ongoing drought might mean for California’s growth and its $2.2 trillion economy. Regardless of how California adapts, scientists agreed that the impacts of the drought are worsened by global warming, which makes the dryness more stressful to wild and cultivated plants alike.

The coal industry lost 50,000 jobs from 2008 to 2012, while solar and wind added 79,000 to their workforce, according to a new study from Duke University. The new renewable energy jobs are not in the same places as the lost coal jobs, however, a topic also examined in a new book on the human impact of transitioning off of coal in places such as Appalachia. President Obama chose neither coal-dependent West Virginia nor Kentucky but rather Utah to announce a plan for expanding the American solar industry workforce by 75,000 jobs, citing the need to remain economically competitive and grow good jobs that address climate change.

Ontario has chosen a cap-and-trade system to limit carbon emissions in the province that accounts for over half of Canada’s economy. The move comes after Premier Kathleen Wynne’s Liberal Party won an outright majority in the provincial legislature last year, enabling her to make good on a six-year-old promise of climate action. In Australia, the results of an opposite electoral reversal were on display, where new data show that carbon pollution rebounded in the quarter after a national carbon tax was repealed last July. In Olympia, Gov. Jay Inslee—facing a divided legislature—framed his climate plan as a way to protect children’s health and fund public education.

Oceans may be about to regurgitate excess heat

After decades when they’ve absorbed 90 percent of the planet’s excess heat, oceans may be about to release some of that warmth back to the atmosphere, climatologists warn. Strong Pacific trade winds have pumped warmer surface waters into the deep for 20 years, but the emerging El Niño phenomenon and a longer-term oscillation in ocean currents is apt to bring that heat back to the surface. Combined with temperature records such as those set for Antarctica (63.5 ˚F in late March, the highest ever recorded on the continent), researchers foresee less talk of a pause in the planet’s warming trend.

Organization for Economic Cooperation and Development (OECD) countries spent five times more in export subsidies for coal, oil, and gas than they did on renewable energy, according to documents reviewed by Reuters. From 2003 to 2013, they extended $37 billion in export credits for fossil generation and $53 billion for fossil fuel extraction but just $17 billion for renewables. The UK-based Overseas Development Institute uncovered an even more lopsided mismatch in tropical conservation: Brazil and Indonesia took $346 million in climate aid to protect their forests, but spent more than 100 times as much subsidizing forest-destroying sectors such as palm oil, beef, and timber.

Agricultural wastes such as straw and corncobs may be made more readily into biofuels with yeast strains used in sake (rice wine) fermentation, British researchers said. Making ethanol from farm wastes would alleviate the controversy over the possible impacts of the emerging biofuel industry on human food production. Regardless of the feedstocks used to produce them, pure biofuels get a pass from city ordinances under consideration in Berkeley, San Francisco, and West Vancouver that would require gas stations to label pumps with a reminder of the climate consequences of fossil fuel consumption.