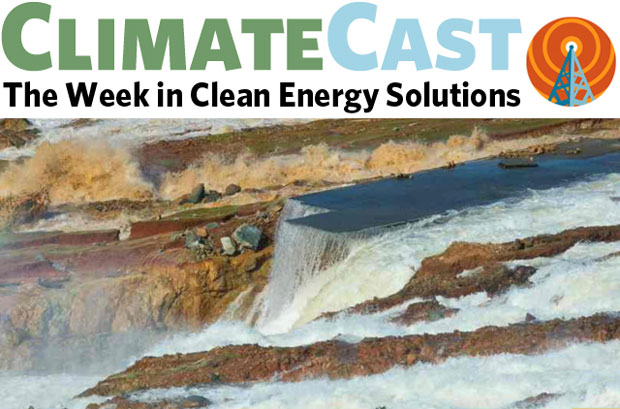 Scott Pruitt won Senate confirmation to head the EPA by a 52-46 vote Friday, just one day after an Oklahoma judge ordered him to disclose thousands of emails between his office and industries that he could have prosecuted as the state’s attorney-general. As a GOP operative told Politico, “Very few people at that level don’t have skeletons in their closet, so you [need to] get confirmations done lickety-split.” In his first interview since nomination, Pruitt said he’d focus on basic EPA mandates, such as acute air pollution and toxic waste clean-up, although his record in Oklahoma casts doubt on his dedication to those concerns. With Pruitt confirmed, the White House was reportedly preparing executive orders to begin repealing President Obama’s Clean Power Plan, to cancel his Climate Action Plan, and to undo the rule extending EPA authority to cover streams and wetlands that drain into the nation’s major waterways.

The wind is shifting—and so can public attitudes

North Carolina commissioned its first large-scale wind farm, made possible by the trend toward taller towers and longer blades that capture wind at higher elevations. Along with the growth of wind energy in West Texas, the spread of wind turbines in conservative rural areas has the potential to change attitudes about clean energy and even climate science, argues David Roberts in Vox, since people’s opinions often morph to match their actions and the ways they can imagine themselves as heroes instead of villains. The speed at which attitudes and laws on gay marriage evolved demonstrates that these attitudinal shifts can occur quickly, California Energy Commissioner David Hochshild told a Stanford seminar; the iPhone—introduced just 10 years ago—shows that new technologies can become ubiquitous quite rapidly. See his full Feb. 6 presentation on California’s energy successes, videotaped here.

California’s Oroville Dam survived the week, as dam operators reverted to using a damaged concrete spillway and lowered the reservoir well below the lip of the emergency spillway. The 188,000 evacuees were allowed to return home, once water was no longer cascading down the emergency spillway and rapidly eroding the ground (see video) below a weir holding back the top 30 feet of the reservoir. Two parties earned “I told you so” rights: environmental groups that argued for lining the emergency spillway when the dam was relicensed 12 years ago, and county governments, which had demanded that the state Department of Water Resources consider climate impacts in determining how much space to maintain in the dam for flood control. A warmer climate means that less precipitation is stored in the snowpack, and a greater likelihood of the intense “atmospheric rivers” that have drenched the state in recent weeks.

No turning back from coal closures

A month into the Trump administration, his supporters are counting on his repeal of stream protections around coal mines to revive 70,000 mining jobs—an unlikely outcome since the US now employs just 50,000 coal miners, and a host of economic factors are arrayed against a coal revival. Similar trends are at work in the Texas oilfields, where high-tech drilling and exploration have kept the increase in oil production from translating into a jobs boom. Meanwhile, energy giants are girding for the transition away from fossil fuels: ExxonMobil will write down the value of its tar sands investments, and Saudi Arabia is readying an IPO of its national oil company, appraised at some $2 trillion at current petroleum prices, before slackening oil demand cuts into its value. In Arkansas, one regulator explained, utilities continue to focus on cutting carbon regardless of Trump’s policies, because they believe they’ll have to reduce climate pollution in the long run, and they are making supply decisions for the long term.

US solar installations jumped by 95 percent in 2016 compared to the previous year, with over 14 GW of photovoltaics added to the grid—more than any other power source. Despite the industry’s overall success, a shake-out continued among residential installers, as NRG left the rooftop solar installation business, and Sungevity laid off 66 workers and cancelled plans that would have given it $200 million in new capital. The industry is gearing up for new regulatory conflicts in the coming year. Besides the usual state-by-state battles over net metering, some utilities are challenging their obligations under PURPA, which requires them to buy independently produced power. Rising interest rates also cut into solar economics, as do the proposed time-of-use brackets in California, which would reduce net metering compensation during solar’s most productive midday hours. Finally, if federal tax reform reduces marginal tax rates, tax equity financing would confer smaller benefits, reducing the profitability of wind and solar.

Toshiba’s chairman resigned last week as the Japanese firm announced more than $6 billion in losses from Westinghouse, its US nuclear subsidiary, and said it was putting the atomic power division on the market. The move was the latest setback for the long-promised revival of the American nuclear industry. “Nuclear safety always undermines nuclear economics,” one observer told The New York Times. “Inherently, it’s a technology whose time never comes.” Even long-time nuclear booster Michael Shellenberger acknowledged the setback, blaming low demand and high costs, as savings from standardization proved elusive. A new study, commissioned by Physicians for Social Responsibility, found that renewable energy could replace the electricity produced by the Northwest’s only power reactor, the 1200-MW Columbia Generating Station, yielding hundreds of millions of dollars in savings, though critics noted that the expected closure of coal plants in coming years will impact regional power markets, possibly jeopardizing those savings.

Sales of electric vehicles reached a new record in Norway last month, when 37 percent of new cars sold were plug-in models; the country aims to sell only zero-emission vehicles by 2025. The value of utility support for EVs is apparent in Kansas City, where the power company’s $20 million investment in charging infrastructure has made the area a hot spot for EVs. Another key factor is the price of batteries, which is falling faster than the goals set by the Obama-era Department of Energy, and is now forecast to drop below $100 per kilowatt-hour by 2020. But some carmakers seem to be planning their strategy by staring into the rear-view mirror: leaders of eight major auto companies last week asked President Trump to consider loosening the federal fuel economy standards by 2025.

Image: Water streaming down a damaged spillway at Oroville Dam.