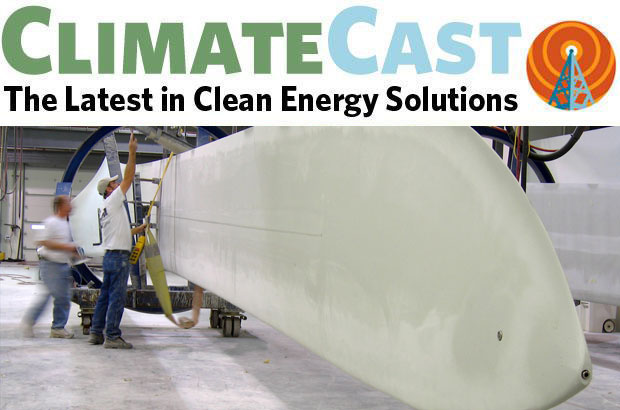 As clean energy becomes increasingly affordable, American businesses are among those leading the charge to make the switch to renewable. Google, already the world’s biggest corporate buyer of clean energy, is looking to deepen its commitment to renewables -- and battery storage in particular. So far the company’s ideas include creating a standalone battery farm that would supply electricity to the power grid, creating a system directly linked to wind or solar farms, and behind-the-meter installations at homes or businesses. And in an historic move, the UN’s International Maritime Organization has approved the world’s first-ever agreement to cut emissions from ocean shipments. Currently around 90 percent of all goods travel by ships, and most of those ships are powered by fossil fuels. Electrifying ports and utilizing clean fuels are two of the ways ships plan to lower emissions.

We are all familiar with the Paris Climate Agreement, but how much do you know about the Gothenburg Protocol? It’s a relatively unknown treaty, but a landmark one that sets limits on how much black carbon and other pollutants countries can permit across the globe. Inside Climate News offers some background on how the treaty helps reduce emissions that harm both the climate and human health. Some countries (including the US) have taken concrete steps to achieve the goals laid out in the treaty, but much more action is needed. A new study highlights how putting a price on climate pollution has positive effects on the environment, but also bring concrete economic benefits—$1.4 billion in economic benefits across the nine states that participate in the Regional Greenhouse Gas Initiative, to be exact. Britain also made headlines after deciding to examine whether its climate targets should be strengthened.

The world added more solar power capacity in 2017 than fossil fuels. Global wind capacity is growing too, and is expected to double by 2027. Renewables need people to install and maintain them, which may be why clean energy jobs are the fastest growing job sector in the US. With many of these careers offering solid salaries, and most often requiring only a high school diploma (and in some cases technical training), middle class life is now becoming more accessible to more Americans.
In “coal country” Virginia, Governor Northam vetoed legislation that would have limited his authority to enact a cap-and-trade program -- the same type of program that has created over 14,500 job-years (a job-year is the equivalent of a full-time job for a year) in the nine northeastern states participating in the Regional Greenhouse Gas Initiative. Closer to home, Washington is planning the state’s largest-ever solar panel project, to be built about 75 miles west of Spokane. A state program will provide tax incentives to help make costs competitive, and the project generate enough electricity to power 4,000 homes each year. From West Coast to East, these two initiatives highlight the important role both incentives and sound policy play in bringing clean energy projects to fruition.

New data confirms that Hurricane Maria was Puerto Rico’s most destructive storm on record, and the third costliest storm of its kind in the world. While Puerto Rico continues its recovery efforts, other parts of the world grapple with their own climate realities: a new study shows how global warming is already harming Virginians’ health -- and how further climate change will only make health impacts worse. The Gulf of Mexico is rising far too fast to save much of the Mississippi River Delta -- land that serves not only as precious habitat for wildlife, but as an important buffer to protect nearby communities from hurricanes and sea level rise. A World Resources Institute report examines which cities are struggling with dwindling water supplies, thanks to climate change. Farmers and fisherman are struggling with a myriad of impacts that affect yields. As the earth warms, demand for cooling appliances will nearly double; we could make the climate problem worse as we work to simply adapt to the climate problem we created.

President Trump has directed the Environmental Protection Agency to weaken air quality rules he says were “suffocating industry.” Meanwhile, EPA administrator Scott Pruitt, is being investigated for a myriad of ethics violations, including misuse of taxpayer funds, inappropriate meetings with industry officials, and more.170 congressional Democrats and a growing number of Republicans have called for his removal from office, including at least 39 senators -- the highest number of senators in US history to sign on to a resolution calling for a cabinet official's resignation. In Colorado, the City of Boulder and Boulder County are joining forces in a lawsuit against Exxon, charging that the oil giant knew about the risks fossil fuels posed as far back as the 1970s. Boulder is the first non-coastal city to sue over climate change, citing wildfires, extreme weather, heat waves and vector-borne illnesses as some of the major risks the county and city are already facing.

In brief: What is eating away at the greenland ice sheet?

Greenland’s ice sheet is melting rapidly, accounting for about 70 percent of that country’s contribution to sea level rise (Greenland gets more of its power from renewable energy—mostly hydropower—than any other country). It is thus especially important to learn what factors contribute to this melting. Predictions for global sea level rise range from about 1 to 10 feet by 2100; the more we understand the factors causing ice sheet melting and what we can do about it, the more accurate sea level rise predictions will be—and the better coastal communities can prepare. Microbes, algae, black carbon pollution, dust and soot are all darkening the ice sheet, absorbing the sun's rays and accelerating melting. And new research shows that dark zone is growing. Check out this great reporting to learn what’s eating away at the ice sheet, and what we can do about it.