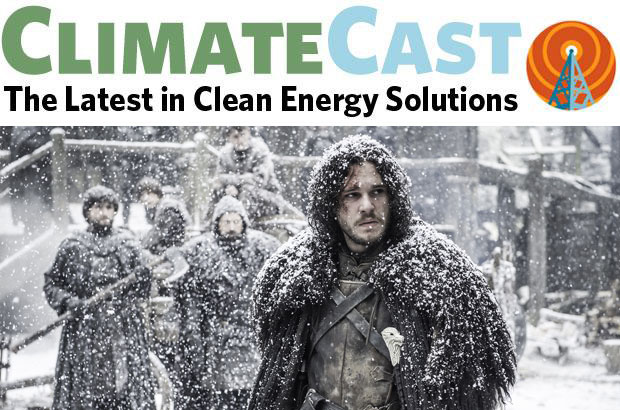 The world commits to Paris Accord—with or without US

At the G20 summit just concluded in Hamburg, the assembled world leaders confirmed a plan for climate action built around terms laid out in the Paris climate agreement. In preparation for the meeting—the first since President Trump announced plans for the US to withdraw from the Paris climate agreement. German Chancellor Angela Merkel had pledged to put climate change high on the agenda. A new report released just prior to the gathering showed that G20 nations provide four times more public financing to fossil fuels than to renewables, adding pressure to the negotiations. Merkel closed the gathering with an address deploring Trump’s decision to abandon Paris, and affirmed that the remaining 19 members are committed to the “irreversible” agreement.

Morgan Stanley analysts report that the US may meet or even exceed its Paris climate accord commitments, despite Trump’s decision to abandon the agreement, thanks to the growing availability and affordability of renewables. Shares of U.S. solar companies have gone up sharply this past month as state policies and low equipment prices drive demand. Rocky Mountain Power just announced a plan to invest $3.5 billion in wind energy, the bulk of which will build turbines in Wyoming, a top coal-producing state. A Texas-based company is looking to build five transmission lines that would bring energy from rural to urban areas. Internationally, renewables press on: German tenants won the right to place solar panels on rented roofs, while a Chinese province of nearly 6 million people generated all its power for an entire week without fossil fuels. The world’s first floating wind farm launched off the coast of Scotland, showcasing new technology now available to unlock expanses of ocean for generating clean energy. In the research and development sphere, Japanese scientists are studying the flight of owl wings in an effort to develop quieter wind turbines.

Oil is becoming a problematic investment, even for oil companies

In our last ClimateCast, we noted an emerging consensus among investors: clean energy is good for business; oil, increasingly, is not. Recent actions show this consensus gaining momentum: President Trump gave the green light to move forward with the Keystone XL pipeline, yet oil producers and refiners seem to no longer be interested. Despite Trump’s drill-baby-drill approach to reopen federal waters for oil exploration, fossil fuel companies are now hesitating to move forward with projects due to low crude costs. Investors are becoming more concerned with aligning investments with the realities of a two-degree warmer world; energy firms face shareholder demands to lower emissions, while some pension funds are demanding more commitment to climate action from firms they invest in.

Moving forward and pushing back: climate action continues at all levels

Despite disheartening federal rollbacks on climate, climate action continues, from House Republicans in the Armed Services Committee approving a measure to study climate change’s impacts on national security, to teachers educating students on climate change even when not mandated to do so. 1,400 US mayors have passed several resolutions pushing back against federal policies on climate change, as well as passing a resolution supporting cities’ transitions to 100 percent renewable energy. In California, a lawsuit challenging an integral part of the state’s cap-and-trade program was dismissed. Former executive secretary of the UN Framework Convention on Climate Change Christiana Figueres has spearheaded a new plan mapping out an achievable pathway to stopping increased emissions by 2020. The plan has been endorsed by dozens of prominent climate scientists and experts.

Snowballing toward electrified transportation: the beginning of the end for gas cars

Oregon has successfully passed a transportation package preserving the state’s low-carbon fuels standard, only amending it to incorporate consumer protections already part of rulemaking efforts. Last week we wrote about the program under attack, but thanks to bipartisan efforts in the Oregon Legislature, the low-carbon fuel standard now has the economic certainty needed to further develop the Pacific Northwest alternative fuels market. Volvo announced plans to completely cease production of solely combustible engine cars starting in 2019, making them the first big car manufacturer to transition to 100% electric and hybrid vehicle production. France announced that the country will completely ban the sale of fossil fuel vehicles by 2040 as part of its push to become carbon neutral by 2050. The affordable Tesla Model 3 begins rolling out later this month.

It's a beautiful world—and it's melting in this heat

Icebergs and ice sheets are melting across the globe; the Larsen C iceberg, soon to break off of the Larsen C ice shelf, will be big enough ice to fill more than 463 million Olympic swimming pools, while the melting Greenland ice sheet could raise global sea levels by 23 feet if it were to melt completely. Too bad we won’t actually be filling swimming pools, as people in cities may especially need them to cool off: climate change is projected to seriously exacerbate the urban heat island effect if no measures are taken to reduce emissions. Speedier sea ice warming is projected to spread pollution further, while warming temperatures are leading to a rise in wildfires worldwide—even in the boreal forests and permafrost tundra of the Arctic. Siberian forests are burning at an unprecedented rate. Montana farmers are struggling with low wheat yields due to hotter and drier conditions. Wheat is the state’s number one crop, valued at nearly $1 billion last year.

Warming temperatures are pushing tropical diseases further north in the US. While all are at risk, the poor and those living in Southern US states are most susceptible, suggesting that climate change will only further exacerbate inequality. Research on cities in Canada reveals a growing need to treat the climate crisis as a public health crisis, as climate disasters cause widespread psychological distress, and summer heatwaves pose significant health risks. Additional research shows that an unimaginable two billion people could become climate refugees by the end of this century. Climate change may also threaten global food supply, as extreme weather events could impact crop delivery and availability. Among nations, evidence suggests a correlation between income equality and decreased carbon emissions: South Korea, Japan, France, Italy and Germany emit less carbon on average than their unequal affluent country counterparts, the US, Canada, Russia, South Africa and the UK.

In Washington, Governor Jay Inslee just rejected the state legislature’s proposal to commit public funds to the construction of a fossil fuel gas plant. While Transalta may decide to pursue construction without tax dollars, Inslee’s decision sent a strong message: Washington State will not subsidize new fossil fuel projects. Governor Inslee deserves a second round of applause—he also just closed a tax exemption loophole in the state’s budget that previously gave oil companies a free ride. This change signifies that during the next two-year budget cycle, oil companies will be forking over $51.8 million that had previously been withheld from Washington taxpayers.

In Brief: Winter is coming (or at least it was supposed to be)