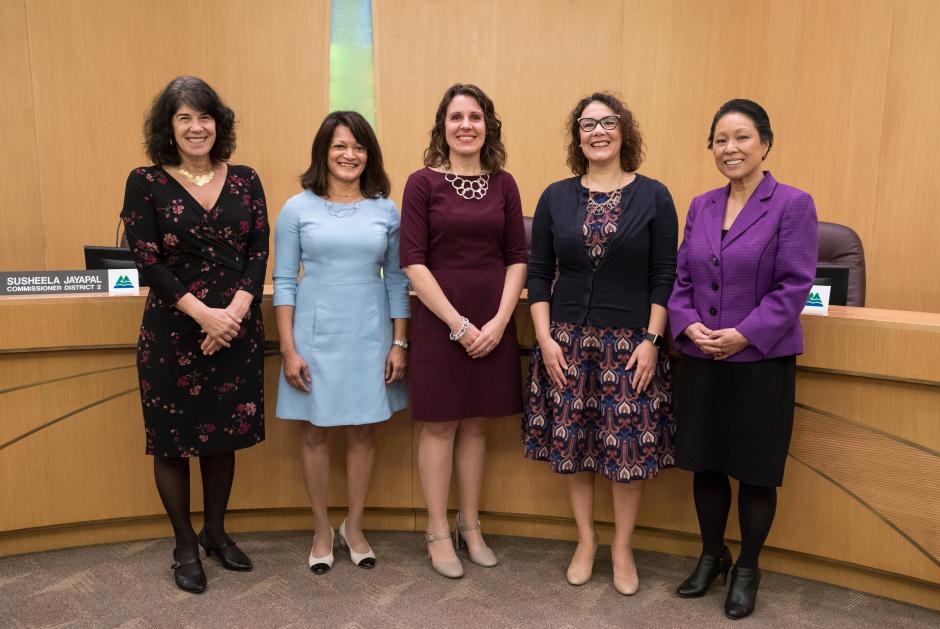 Portland, Oregon — Today, the Multnomah County Commission unanimously approved a resolution that will ensure all new county buildings —including county libraries, courthouses and community centers—are built to be fossil-free and utilize 100% clean and renewable energy.

“We work with low-income households, seniors, people of color, and communities at the frontline of the impacts of accelerating climate change,” stated Peter Kernan, Program Director for Community Energy Project (CEP) during the hearing. “Today, efficient, electric technologies exist in both buildings and transportation that will save taxpayer money, spur economic activity and job growth, and reduce both local air pollution and climate pollution more broadly. The commitment before County Commissioners today is an opportunity to provide both leadership and direct action that will reduce future contributions to climate change and help those most impacted by pollution.”

Last November, Multnomah County voters approved $387 million in bonds for public library construction and improvements. Shortly thereafter, many members of the community asked Multnomah County Commissioners to commit to construct the new libraries and major renovations to be fossil-free and rely on clean energy.

“Public works projects should be a reflection of the community’s values,” said Leonard Barrett, Board Co-President of Families for Climate. “In that spirit, Multnomah County buildings are now a reflection of our community’s commitment to investing in a resilient clean energy future for all. That future just got closer and brighter.”

Buildings are the second largest source of Oregon’s carbon emissions. A clean, climate-friendly building does not rely on heating oil, fossil gas (a.k.a. “natural” gas), or other fossil fuels for its energy needs, and operates without releasing greenhouse gas and particulate air pollution. Constructing buildings to utilize clean electricity —instead of fossil gas—for heating and hot water is one of the most effective ways to reduce a building’s climate-harming emissions and air pollution. Many of those who testified in support of the County’s resolution reminded the Commissioners of the growing climate crisis, and noted the fierce and widespread wildfires and smoke throughout the state and region just six months ago.

“Our kids will inherit the decisions we collectively make today about their future,” stated Meredith Connolly, Oregon State Director for Climate Solutions. “One of those decisions that has a long lasting legacy is our buildings, which on average last half a century. We must build smarter and future-proof public buildings starting now. We must draw the line on embedding fossil fuels into the buildings where our families and our community gathers.”

Some supporters raised the risks of gas leaks and explosions as another reason to build all-electric and fossil-free going forward. Earthquake risk is a major safety concern of gas use. Pipelines have a high risk of exploding during seismic activity, with gas responsible for at least 20% of post-earthquake fire ignitions. All-electric buildings are more resilient following natural disasters as electricity can be restored more quickly than repairs can be made to ruptured gas lines. This is an important consideration for County buildings that can become community shelters after natural disasters.

Dozens of organizations also weighed in showing support for the action, ranging from labor voices like IBEW, public health organizations like Oregon Physicians for Responsibility, commercial building energy experts like New Buildings Institute, community groups ranging from APANO to Verde, and many climate groups including Sunrise Portland and 350PDX.

This action follows both the City of Portland and the County committing to 100% clean electricity by 2035 and 100% clean energy community-wide by 2050 in 2017. The County has also voted to oppose new fossil fuel infrastructure. This new resolution puts Multnomah County on the path to meet those 100% clean goals by drawing a line on fossil fuel hook-ups in construction of new county buildings and utilizing clean electricity instead.

At the same time, the Oregon Legislature is currently considering a 100% clean electricity policy statewide, with momentum building as the House Energy & Environment Committee moving the bill forward this week.

The County also looked to future-proofing and cost savings with the measure, because when a building is outfitted at the outset to use fossil gas, that choice is typically locked in for 50+ years. Experts also noted in testimony that it’s also more expensive to hook a building up with both gas and electric infrastructure compared to building all-electric from the start.

Other Pacific Northwest cities and counties are also taking action to join the growing transition to 100% clean buildings, including Seattle recently updating their commercial code to end most fossil gas use in new commercial buildings and some apartments city-wide.