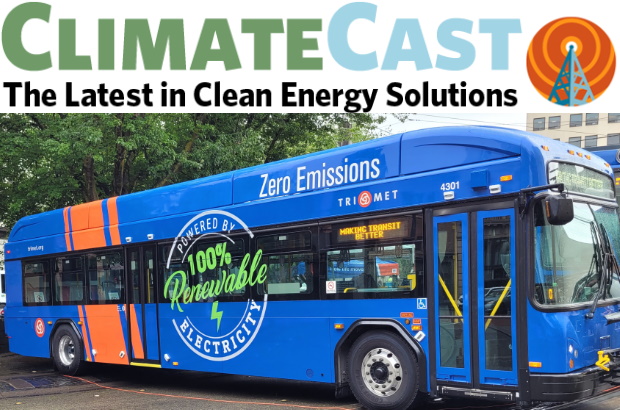 Oregon’s largest public transit agency unveiled plans this week to reduce its carbon dioxide emissions by 25 percent by transitioning all MAX trains, electric buses, and TriMet-owned facilities to use renewable electricity. This represents an important step toward a future clean transportation system for the Portland region (TriMet is currently the largest purchaser of diesel fuel in the state, operating over 700 diesel-powered vehicles, including buses, paratransit, and support vehicles).

2021 hasn’t exactly been a banner year for Big Oil. At least two climate hawks were elected to the board of oil giant ExxonMobil, a majority of Chevron shareholders voted to force the company to reduce carbon emissions, a Dutch court ordered Royal Dutch Shell to sharply cut greenhouse gas emissions globally within the decade, and the proposed liquefied “natural” gas (LNG) pipeline at Jordan Cove, Oregon has been postponed indefinitely.

Now, in a major victory for Indigenous tribes and grassroots organizers, TC Energy has officially cancelled its proposed Keystone XL oil pipeline, which would have created a second, larger pipeline linking tar sands in Alberta, Canada with oil refineries in the Gulf Coast region. The project has been moribund since US President Joe Biden revoked the pipeline’s federal permits in January. However, several other oil pipeline projects are still moving forward, in spite of vociferous opposition.

GM anticipates making only EVs by 2035

Automakers continue to up the ante on electric vehicle development, as General Motors just announced it will spend $35 billion by 2025 on electric and autonomous vehicles, and set the goal of only building electric light-duty vehicles by 2035.

This comes on the heels of Ford’s public unveiling of its electric F-150 pickup truck, featuring President Joe Biden behind the wheel. Dodge also announced that it has a number of EVs in the works, and that the forthcoming Challenger SRT Demon—the company’s fastest sports car to date—will be a battery-electric vehicle. While more and more EVs are coming to market, however, growth in public EV charging infrastructure is coming more slowly.

Juneteenth, celebrated annually on June 19th and recently declared a federally-recognized holiday, commemorates the emancipation of enslaved people throughout the United States. As climate and environmental advocates, this holiday also represents an opportunity to reflect on the impacts of racism on our environment and our work to address it. Pervasive and longstanding inequalities in air pollution, housing discrimination, and exposure to toxins (among many others) have and continue to disproportionately impact Black, Indigenous, and people of color communities. In order for us to effectively advocate for cleaner air and a healthier climate, it can be helpful to understand how things got so messed up in the first place. Learn more about the origins of Juneteenth, its vital intersections with climate and environmental protection, and the long struggle for its recognition.

Do you live in Oregon?