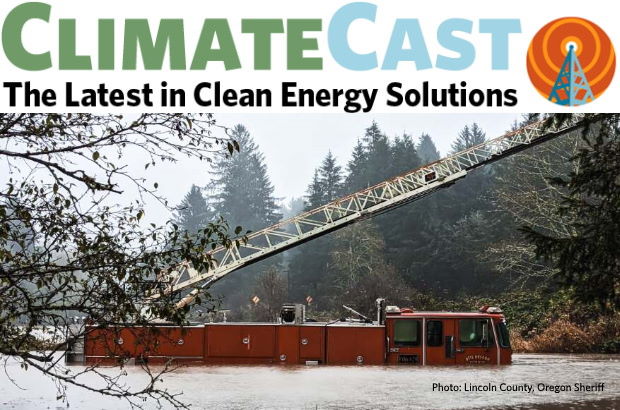 LINCOLN COUNTY, OREGON SHERIFF
The good, the bad, and the necessary next steps
Jonathan Lee
November 19, 2021

After a summer where record-breaking heat waves made international headlines, low-lying towns and neighborhoods in the Pacific Northwest and British Columbia suffered horrific losses from severe flooding from the “atmospheric river” of rain that dumped down this week. With swollen rivers receding, communities are slowly cleaning up but also left grappling with tragic loss of life and impacted loved ones. Washington Governor Jay Inslee is calling for use of state and federal relief including from the just-passed infrastructure bill and for further action on climate and resiliency. Other voices offered perspective to not give up hope while we collectively absorb the continued impacts and losses.

COP26:  the good, the bad, and the necessary next steps

Nations of the world left Glasgow having discussed some very necessary and long-overdue actions to keep global warming below 1.5 °C (2.7 °F). For the first time ever, Brazil—home to the world’s largest rainforest—and 109 other nations agreed to stop and reverse deforestation. Additionally, over 100 countries including the U.S. signed a new Global Methane Pledge aimed at reducing emissions by 30% by 2030. Much of this progress was accompanied by pandering statements from world leaders and media coverage of some unexpected conference attendees, prompting one observer to compare COP26 attendees to aristocrats ahead of the French Revolution, at least in terms of their disconnectedness from the growing magnitude of climate impacts. Furthermore, over 500 representatives from the fossil fuel industry were involved with talks at COP26, while the voices and concerns of the most affected by the climate crisis were again left out in the cold. Youth activists unsuccessfully pleaded for the UN to declare a climate emergency and Indigenous leaders pointed out that “at least 1,005 environmental and land rights defenders have been murdered since the Paris accords” as they worked to stop climate change.

For most smaller or developing nations, the “climate funds” repeatedly promised from wealthier governments and private sectors are still not being delivered. Some loans have been provided but the global north needs to reckon with the fact that their GDPs have only grown due to centuries of extracting resources and exploiting the people of nations that are now on the frontlines of climate impacts.

On a final note of progress (and perhaps hope): COP26 was the first time fossil fuels were specifically named as a major contributor to climate change and the final pact text had the world agreeing to “phase down” their use of fossil fuels (Climate Cast editor’s note: wording was changed from “phase out”); the ever spot-on David Roberts, summed up well why shouldn’t get “bummed out” about COP26.

Earlier this week, Oregon’s Environmental Quality Commission voted to enact Clean Truck Rules that will accelerate the state’s transition to zero emission trucks and reduce smog pollution from new diesel truck engines. The transportation sector remains Oregon’s largest source of climate pollution, so the successful adoption of these rules represents a major climate policy win for the state. Oregon joins California as the second US state to adopt the Clean Truck Rules, with Washington, Massachusetts, New York, New Jersey and Maine poised to consider similar regulations by the end of 2021.

In another local climate victory, the Fossil Free Eugene Coalition successfully lobbied the Eugene City Council this week to commit to developing a citywide plan for fossil-free building electrification. This is a major step toward getting methane gas out of homes and buildings.

Are pigs flying in Washington D.C.?

After months of negotiation and political wrangling, US President Joe Biden signed a $1 trillion bipartisan infrastructure bill earlier this week. Although it is not a climate-focused bill by any stretch of the imagination, it still includes billions of dollars earmarked for environmental justice and renewable energy projects, pollution and natural disaster mitigation, mass transit and intercity rail upgrades, and electric vehicle infrastructure nationwide. The attention of politicians, pundits, and observers now turn to the Build Back Better Act, which now contains many of the climate action provisions that were stripped from the infrastructure bill. As of press time, the House passed their version of the bill along sharp Party lines. The Senate is poised to take up the bill, where the pathway to passage is tight; it faces both a razor-thin Democratic majority and continued attempts to thwart progress by the fossil fuel industry.