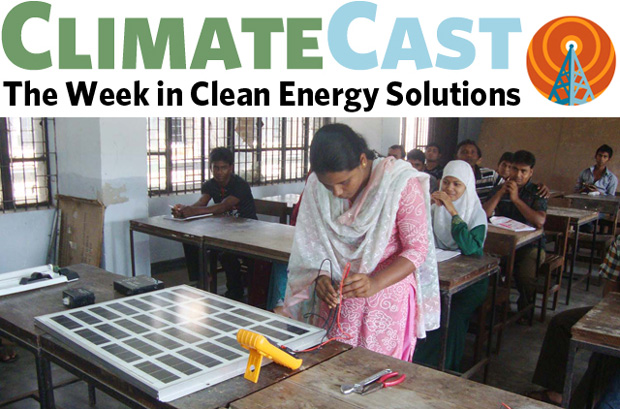 The annual cost comparison of renewable and fossil power by Lazard shows that the cheapest wind and solar power are now both less expensive than fossil gas electricity, thanks to an 11 percent drop in the cost of utility-scale solar power since last year. Per megawatt-hour, wind came in a $32 to 62, large-scale PV at $46 to $56, and fossilgas at $48 to $78, even before counting any subsidies or tax credits. This “levelized cost of energy” doesn’t account for the intermittency of renewable generation, which can be tackled through grid improvements, demand response, and energy storage. The Hawaiian utility released a new plan to meet the state’s 100 percent RPS five years ahead of schedule in 2040, with the first island (Molokai) projected to reach that milestone in 2020. The third quarter of 2016 saw the US install 4.1 GW of new solar power, nearly triple the same period last year; California’s largest utility reached its net metering cap of 2.4 GW and so will now offer new rooftop installations a deal that is slightly less sweet. Solar developers are benefitting from a glut of manufacturing capacity in China, which drove PV prices down to 36 cents a watt last month, a third lower than a year ago. Off the New York coast, the Norwegian oil giant Statoil won a $42 million auction for an 80,000-acre tract of offshore wind leases, which could accommodate nearly 1 GW of generation.

Entering the last month of his administration, President Obama banned oil drilling in 115 million acres off the Arctic coast of Alaska and 3.8 million acres of underwater canyons on the Atlantic coast. Obama invoked the 1953 Outer Continental Shelf Lands Act in announcing the permanent ban, an unprecedented use of the law that will likely be decided by the courts. The White House also released a public draft of the Climate Science Special Report, which describes the physical science behind the next National Climate Assessment, due out next year. The report aims some findings squarely at climate deniers, attributing observed changes in the climate to human activities, adding, “There are no alternative explanations,” and debunking the notion that global warming has slowed or halted. Uncertain whether scientific research will be a worthwhile pursuit in the Trump era? This interview with Obama’s science adviser John Holdren makes the case for not giving up.

The impending Trump era is coming for the climate

President-elect Trump filled out his proposed Cabinet over the holidays, naming climate denier and former Texas Gov. Rick Perry to head the Department of Energy; advocate of federal-lands fossil fuel development Rep. Ryan Zinke for Secretary of the Interior; environmental regulation foe Oklahoma Attorney-General Scott Pruitt to head the EPA; and Exxon Mobil CEO Rex Tillerson to run the State Department. Two of those—Pruitt and Tillerson—are reportedly among the eight nominees whom the Democrats will target in confirmation hearings. Six Democratic senators sent Pruitt a letter asking him to detail his ties to the fossil fuel industry, and Tillerson’s cozy relationship with Russia—including his firm’s mammoth plans to drill for oil in the Russian Arctic—have set off conflict-of-interest alarm bells. Ironically, CEO Tillerson has acknowledged climate realities and endorsed a carbon tax, setting him apart from his potential colleagues in the Cabinet, even as he has advocated for continued fossil fuel use. Tillerson would be the chief US climate diplomat—a position in which he could easily disrupt the international framework for joint action to reduce climate pollution, seen as one of the most vulnerable forces for climate action in the current landscape. Meanwhile, the actions Trump takes on the Clean Power Plan and the coal leasing moratorium will be harbingers of the new administration’s impact on the energy scene.

In a last-minute move before it adjourned for the year, the Michigan legislature raised its Renewable Portfolio Standard from 10 to 15 percent and protected retail net metering for rooftop solar—a move all the more remarkable because it was pushed by the state’s Republican governor. In neighboring Ohio, GOP Gov. John Kasich vetoed a measure that would have defanged the state’s RPS, set at 12.5 percent by 2025. In California, the governor and legislative leaders vowed to press ahead with the state’s climate initiatives, but expect that the shifting federal tide will hinder their efforts because they may have to spend more time defending their programs. Washington Gov. Jay Inslee proposed a carbon tax in his new budget, a $25 per metric ton fee that would fund education and the energy transition. The Center for a New Energy Economy rounded up the year’s energy legislation at the state level; highlights are summarized here.

Nearly 60 percent of India’s electricity will be fossil-free by 2027, according to a draft plan released last month by its national utility. The benchmark would far surpass its Paris climate pledge of 40 percent carbon-free power by 2030, and was made possible by falling PV prices and new foreign investment. An auction there for 500 MW of rooftop solar drew winning bids as low as 4.4 cents per kilowatt hour, the Solar Energy Corporation of India announced this week. The findings fit with the continued growth of clean energy capacity and investment in the developing world described in Bloomberg New Energy Finance’s 2016 Climatescope report. In Bangladesh, a novel approach to village-scale solar power is being tested: “swarm electrification,” in which families can buy surplus power from their neighbors using a simple mobile-phone payment system. On a larger scale, Costa Rica’s utility announced the country ran on 100 percent renewable power for 250 days last year, generating less than 2 percent of the country’s electricity with fossil fuels during 2016.

Warming ocean waters are driving commercial fish species farther north along the US East Coast, unsettling the systems that have divided the allowable catch among fishermen of different states.  In Mexico, droughts have led rural residents to migrate to Mexican cities and the United States, while more than 1 million Africans were forced from their homes in 2015 due to sudden “natural hazards” such as floods. In California, forests are failing to grow back after intense wildfire, while shrinking Alaskan pack ice has pushed polar bears into Arctic villages. The NOAA-sponsored 2016 Arctic Report Card chronicles the “unraveling” of the boreal climate, and researchers in Greenland are documenting the break-up of an ice shelf, convincing one formerly skeptical oceanographer that the climate there has truly changed. The uncertain rate of sea level rise poses a challenge to urban planners, since the ocean could rise anywhere between two and six feet by the end of the century, according to current projections.

If you like visuals, UK climate scientist Ed Hawkins of the University of Reading has collected 2016’s best climate graphs and GIFs, including the famous expanding temperature spiral (h/t David Roberts). If words are your thing, read the Rolling Stone interview with climate scientist James Hansen on whether our goose is now cooked.