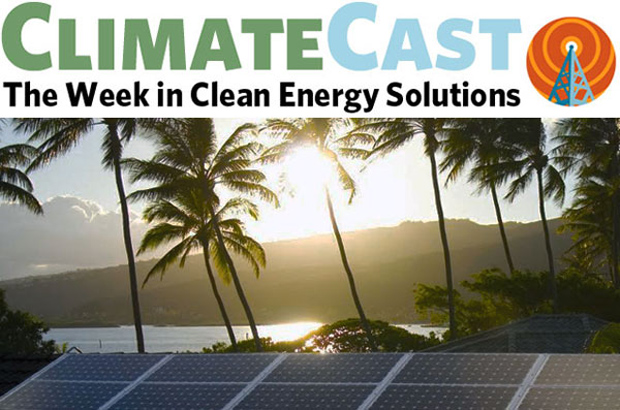 Bonn negotiators tell co-chairs to figure it out

Talks in Bonn ended last week with little substantive progress toward a December climate pact in Paris, punting to the conference co-chairs the task of whittling down 80-plus pages of possible treaty clauses to a manageable draft. Key issues dividing the parties include how climate commitments will be shared between countries, and who will pay for their implementation. Negotiators did make progress on incentives to protect forestland to keep its carbon sequestered, but disagreed about when to reckon with the essential question of whether nations’ voluntary climate pledges will add up to enough carbon reduction to stay within the 2˚C maximum for global warming.

We will be the 100 percent (renewable)

Hawaii’s electricity supply will become 100 percent renewable by 2045, according to legislation signed last week by Gov. David Ige. The Texas city of Georgetown isn’t waiting, and has already signed up about 150 MW each of wind and solar, enough to power that fast-growing city of 60,000 near Austin. These all-renewable solutions mirror the findings of a Stanford team, whose new analysis shows how each of the 50 states could run entirely on wind, water, and solar power by 2050. At the household level, California upgraded its building energy standards last week to approach its 2020 goal that new homes produce as much energy as they consume.

National climate pledges made thus far would cause clean energy to overtake coal as the world’s leading electricity source by 2030, the International Energy Agency said this week. Progress toward that end included a 76 percent increase in US residential rooftop solar installations in the first quarter of 2015, compared with the same quarter last year. Even more significant was the 10 percent price drop, a pace that in three years would decrease costs by as much as the 30 percent federal solar tax credit. Extrapolating from these and other trends, investment bank UBS predicted that solar power is on track to become the world’s ‘default’ generation technology.

Two dozen kayakers and other boaters attempted to blockade Shell’s Arctic oil platform from leaving the Port of Seattle Monday, but were plucked from the water and arrested, allowing the mammoth drilling rig to head toward open water. The arrestees were fined $500 and released. Another barrier to Shell fell when the EPA granted it two permits to discharge wastewater into the Chukchi Sea, leaving it just four permits short for this summer’s operations. Local commentators highlighted alternative ways of resisting the drilling, such as a boycott of Shell fuel, and Climate Solutions’ KC Golden pointed out the folly of going to such lengths to drill for unnecessary oil.

The EPA will use the Clean Air Act to regulate climate pollution from aircraft, following a finding published last week that planes’ emissions can affect human health. The agency now needs to devise the regulations, but will delay the process to coordinate its efforts with the International Civil Aviation Organization, due to release global rules for aircraft fuel economy early next year. Aviation emissions worldwide produce nearly as much climate pollution as Germany, with more than one-fourth of that pollution coming from U.S. aircraft.

Consortiums of rooftop solar, battery banks, and EVs could become players in California’s electricity market if they provide at least 500 kW, under rules floated last week by the state’s grid operator. Some of that power might come from down-cycled Nissan Leaf batteries as a cheap grid storage option. In Maine, solar generators could forgo net metering and get paid for the actual value their electrons provide to the utility. But sometimes these creative arrangements hit a wall, as in Nevada, where regulators refused to let a data center leave the utility for a third-party provider unless it helped pay for a share of the utility’s stranded costs.

Global warming has allowed dolphins north into the Norwegian Arctic, where polar bears were seen feeding on them for the first time. In Alaska, the melting Arctic poses a security threat to the U.S. by opening it to Russian warships; on a planetary scale, the melting of permafrost across the boreal regions has the potential to release vast quantities of carbon pollution, amplifying climate change. California’s severe drought led regulators to halt water deliveries to farmers whose water is usually secure, while residents of rich enclaves whined their entitlement to as much water as they can afford. Raising beef is water-intensive, but satirists suggest you can justify your meat habit by giving up showers.