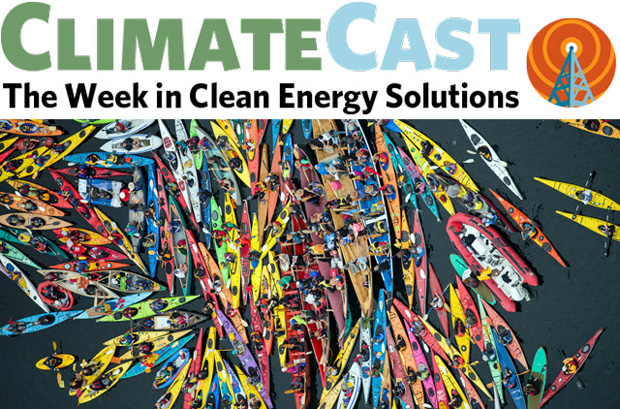 Canada plans to cut its greenhouse gas emissions 30 percent below 2005 levels by 2030, according to climate goals announced last week in the run-up to December’s Paris summit. The pledge is much less ambitious than the EU’s target of a 40 percent cut by 2030, and slower than the U.S. plan to achieve nearly the same reduction five years sooner. In Australia, Labor and Conservative negotiators settled the fate of that country’s Renewable Electricity Target, agreeing to shoot for 33,000 annual GWh of clean power by 2020 (including large hydro), a bump of less than 50 percent above current levels and just 17 percent of current consumption.

The Lax Kw'alaams aboriginal band in BC last week spurned a $1 billion offer for the rights to build a liquefied natural gas terminal on tribal lands, blocking a TransCanada pipeline that would have brought gas from northeastern BC across sensitive eelgrass habitat near the mouth of the Skeena River. Taking a different approach, a Wisconsin county has stalled Enbridge’s oil pipeline expansion with a demand that the firm boost its spill insurance by $25 million. Efforts like these led natural gas industry speakers last week to complain of the “Keystone-ization” of the debate over new fossil fuel infrastructure.

Controversy mounted over the home-porting of Shell’s Arctic drilling fleet in Seattle last week, as the Port Commission asked Shell to stay away, a flotilla of kayakers and canoeists took to the water to express their objections, and protestors thronged the gates of the port in hopes of preventing work on the mammoth oil rig. The demonstrations followed a week in which Shell came under criticism for its record of mishaps in Arctic waters, its hidden spending to influence Washington politics, and its scenario planning, which seems to assume that greenhouse gas emissions will be curbed too slowly to keep global warming within the 2-degree-Celsius international goal.

Cheap gasoline is enticing more than half of hybrid and electric car owners to return to gasoline-only powered cars at trade-in time, according to automobile research company Edmunds.com. The extra cost of a hybrid now takes 10 years to pay back, instead of five years as it did when gas cost over $4 a gallon in 2012. Another motive may be the rising fuel economy of gas-only cars, with many former hybrid owners buying new models in the 35 mpg range. Low gasoline prices may also prove challenging for Toyota’s Mirai, the first mass-market hydrogen-powered vehicle which debuts in California this October with a $57,000 price tag.

Scientists at Oak Ridge National Laboratory drew inspiration from moth eyes and lotus leaves to create an efficient coating for solar panels that repels water and reduces glare and reflection, the lab announced last week. Beyond the lab, Swedish solar pioneers completed four years of testing in South Africa’s Kalahari desert of a 40-foot-diameter concentrating solar generator that tracks the sun to power a Stirling engine. The firm has just secured private funding for its first commercial installation. And Spanish windpower iconoclast Vortex Bladeless has generated buzz with its unconventional design ahead of a rumored crowd-funding campaign, but savvy observers counsel caution.

Nukes’ role in decarbonization a challenging one

Atomic energy will play at most a modest role in the world’s effort to combat climate change, according to a new study from the International Energy Agency, which envisions the atom’s share of global power rising from 11 percent today to 17 percent in 2050. Challenges include a “negative learning curve” that makes reactors cost more with greater experience, and long lead times—including the extreme case of a Tennessee reactor slated to come on line this year, 36 years after construction began. As existing reactors age, safety incidents have led to growing local pressure to close them.

How biofuels are faring in a world of cheap oil

Despite diminished oil prices, aviation biofuels are doing well thanks to continued support from airlines and the US Navy, as are renewable diesel and butanol, according to Biofuels Digest. For producers of ethanol and biodiesel, the key to profitability lies in tax credits and anticipated changes in the federal Renewable Fuel Standard, which is the subject of a media campaign to pressure the EPA to require that more biofuel be blended into the nation’s motor fuel supply. Higher ethanol content got a boost from two off-label gas station chains with outlets in 17 states, which announced last week that they will start selling E15, gas with 15 percent ethanol content.

After a long hiatus, Mad Max returned to the screen last week with a sequel set in a drought-stricken dystopic future, which brings home what more of the planet might start to look like if carbon pollution isn’t curbed. Climate change is at most a subtext in that Australian box-office hit—in contrast to the entries in the University of Washington’s Climate Change Video Contest, screened last Friday at Seattle’s Town Hall. Make sure to catch the evocative 3-minute winner in the high school category as well as this passionate piece, which shatters any illusion that climate is just a white middle-class issue.

On the Climate Solutions Blog: Ben Serrurier explains how a clean fuel standard would create the fair market to balance the playing field with oil companies and help the transition from petroleum-based to clean fuels.