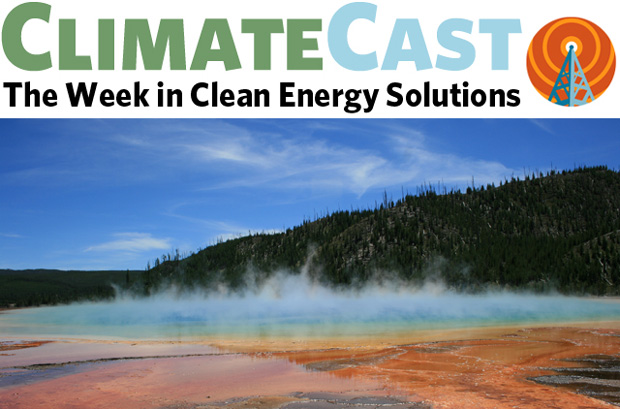 How fast can the shift to clean energy happen?

Clean energy comprised more than half of the new generating capacity installed worldwide last year, according to an International Energy Agency report that included statistics such as the number of solar panels installed daily (half a million) and the number of wind turbines erected in China every hour (two). The IEA identified clean electricity as a bright spot, but noted that the switch to climate-friendly energy for building heat and transportation has been slower. In the US, PV prices are dropping thanks to a glut of Chinese-made panels (although residential solar installations are slowing), and trends toward solar power and LEDs have a lot of momentum behind them. In the eastern US, the grid could be 30 percent renewably powered by 2026, according to a new analysis, provided that utilities expand transmission capacity to bring windpower from rural areas to load centers.

Activists near the Standing Rock Sioux reservation in North Dakota planned their next moves after police last week used pepper spray and bean-bag rounds to clear an encampment of anti-pipeline activists and arrested 141 demonstrators, many of whom complained they were mistreated while in custody. Thousands have converged on the area, and many more “checked in” on Facebook as though they were there, to confound law enforcement officers who are rumored to be tracking protestors using social media. Tires and vehicles have been burned to block roads, as the conflict raises issues of native sovereignty and treaty rights. Private security guards who confronted demonstrators last month are under investigation for unlawfully using attack dogs on protesters, the local sheriff’s office said.

Exxon Mobil to write off reserves, hand over records

Exxon Mobil will write off as much as 20 percent of its oil reserves, the company announced last week, as it declared third-quarter earnings that were down 35 percent since last year. The re-evaluation will affect 3.6 billion barrels in the Canadian tar sands, and 1 billion elsewhere in North America that may no longer be economically viable to extract—a changes securities regulators had demanded in order to portray the firm’s true asset value to investors. Exxon Mobil also lost a case before the New York Supreme Court, seeking to shield its accounting firm from having to turn over records stretching back four decades that could show how Exxon Mobil hid what it knew about climate change from the public and its investors.

Driverless carpools made possible by autonomous vehicles would be the cheapest urban mobility option, according to a new study by Bloomberg New Energy Finance, at a cost below buses, subways, or owning and driving a personal auto. But government policies and human psychology will determine whether self-driving cars actually reduce pollution and congestion. Meanwhile, electric vehicles made progress as Quebec adopted a goal of 100,000 zero-emissions vehicles by 2020, and the EU drafted rules that will require all new and refurbished homes to have an EV charging connection. The first reviews of the 238-mile Chevy Bolt are out, including this video road test; in India, Mahindra Electric released an urban four-passenger EV with a 70-mile range, starting at just $8,100.

The international shipping industry agreed last week to give itself seven more years to craft a plan to reduce climate pollution from transoceanic freight, which now amounts to nearly 3 percent of the world’s output of greenhouse gases. Meeting in London, the UN’s International Maritime Organization set its course on drafting a plan by 2018 and finalizing it by 2023. The outcome is especially disappointing next to this month’s aviation agreement, which will cap airplane emissions at 2020 levels. One bright spot in the talks: the level of air- and water-polluting sulfur in ships’ bunker fuel, which can now range as high as 3.5 percent, will be capped at 0.5 percent by 2020.

Clean energy, not coal, is best for developing world

Coal cheerleaders claim their fuel is necessary to lift the developing world out of poverty, but a new international development report finds otherwise, and debunks the claim that coal power lifted China out of poverty. (Extreme poverty had tapered off before the massive growth in coal plants, which were built to serve industry.) Of the 1.2 billion people worldwide who live without electricity, 85 percent live in rural areas beyond reach of the grid, where transmission lines and new coal plants are at least a decade away. Instead, solar power can provide basic electric services much sooner and for as little as $56 per year—less than the cost of kerosene. In South Africa, a new analysis finds solar and wind power is 40 percent cheaper than coal and about half the cost of nuclear power.

Stay on the steamy side, or maybe on the breezy side

The price of wind power is likely to drop by about one-fourth in the next 15 years, according to a survey of 163 wind experts by Lawrence Berkeley Laboratory who foresee much steeper declines in cost than the published literature or official federal forecasts. Advances in wind energy include repowering 1980s- and ’90s-vintage windfarms to use modern turbines with longer blades, higher hub heights, and designs that are less likely to collide with birds. In fact, windpower is going so mainstream that the US Bureau of Land Management is planning to auction the rights to build wind and solar energy facilities on public land, much as it does for oil and gas leases. Last week, the bureau held its first geothermal auction in six years, for 16,000 acres in five western states.