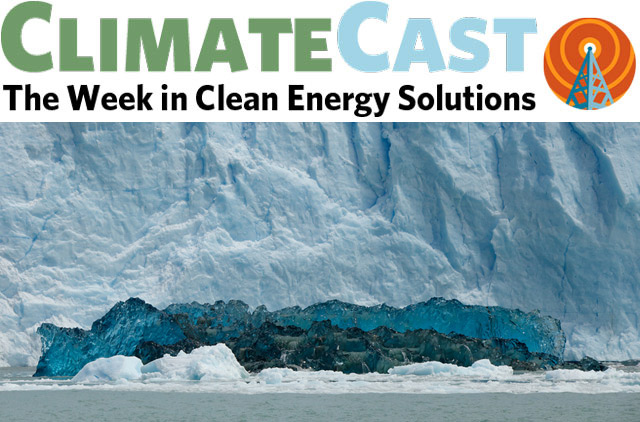 The growing parity between renewable electricity costs and fossil generation went mainstream this week, as The New York Times highlighted solar and wind’s new-found ability to outcompete coal- and natural-gas-fired generation. Plummeting solar prices created a statistical anomaly in 2013, with solar investment $19 billion lower than the previous year’s total, but it funded 5 more gigawatts of capacity than in 2012. Even rooftop solar—more expensive per installed watt than utility-scale facilities—is on track to match retail electricity within two years, according to Deutsche Bank. The PV industry continues to consolidate, with Chinese firms controlling eight of the world’s 10 largest panel manufacturers after acquiring a Norwegian firm last week.

With renewable electricity prices dropping, several big companies made commitments to clean power last week. Ikea bought a Texas wind farm, Google contracted for wind power in The Netherlands, and Amazon pledged, somewhat ambiguously, to power its data centers entirely with renewables. The utility giant NRG promised to cut its carbon pollution in half by 2030 and by 90 percent by mid-century, a goal it intends to meet with renewables and carbon capture and storage. In a move that will help integrate renewables at scale onto the grid, Southern California Edison accepted bids for hundreds of megawatts of new storage and demand management—a strategy also being used in Texas.

The U.S. EPA failed to set a new standard for the minimum amount of biofuels to be blended with the nation’s motor fuel supply, it announced last week. But alternative fueled transportation scored other advances as California regulators allowed utilities to enter the electric-car-charging business; the makers of hydrogen-powered vehicles accumulated more experience and rolled out new models, touting the advantages of quick fill-ups; and Berkeley, CA, moved to put global-warming warning labels on gasoline pumps. Meanwhile, OPEC whistled past the graveyard, dismissing the prospects for plug-in transportation.

Two senators introduced a bill that would levy a $42 per ton fee on all U.S. carbon dioxide emissions, and use the proceeds to fund an as-yet undetermined mixture of tax cuts, dividends to U.S. citizens, infrastructure investment, and transition assistance. Although it may have little chance of passage in the current political climate, its contribution to the dialogue on carbon pricing fits with these thoughtful principles and would address the uncertainty for wind developers that comes with the expiration of their industry’s tax credits. In Washington state, the governor’s report on carbon pricing continued to spark discussion between the governor and GOP legislative leaders.

Even as the House of Representatives passed a bill that would make it harder for scientists to advise the EPA, campaigners girded for next year’s rematch over the Keystone XL pipeline after the project went down to a narrow defeat in the Senate last week despite Sen. Mary Landrieu’s intensive lobbying. Ontario and Quebec planned a joint strategy to set conditions for the TransCanada East pipeline, floated as an alternative route for tar sands oil if the Keystone XL is blocked. Stepping back for a longer view, some climate campaigners claimed that the political winds are changing in their favor as climate becomes an inescapable issue.

In North Dakota’s oil-drilling industry, regulators rarely pursue formal complaints about environmental degradation, settle fines for 10 percent of penalties, and receive thousands of dollars in campaign contributions, according to a two-part investigative series, but North Dakotans are getting active in the wake of a giant oil spill and a derailed oil train explosion. Meanwhile, Canadian activists continue to get arrested while protesting against Kinder Morgan drilling for oil on Burnaby Mountain, but First Nations police helped tribal elders keep the sacred fire burning after it was moved from the company’s drilling site.

Impacts of global warming spread across the planet

The last year to set an annual global cold temperature record was 1909, according to a new animation, and 2014 is on track to be the hottest ever. Regional implications include the warming of the Gulf of Maine—heating up faster than 99.85 percent of the world’s oceans—and rapid melting in Glacier National Park, which may be left glacier-free in 30 years, wreaking havoc on all species that rely on glacial meltwater to survive. Evidence is mounting that global warming disrupts the normal progress of the jet stream around the northern hemisphere, leading to extreme weather patterns such as this month’s Buffalo-area snowstorms.

Following this month’s Sino-U.S. pledge to cut carbon emissions, China announced plans last week to cap the coal it burns by 2020 at a level 17 percent above its 2013 consumption. Its intended shift away from coal—which it vowed would supply no more than 62 percent of its energy by the end of this decade—will require a $2 trillion investment in carbon-free electrical generation, and augurs poorly for proposed U.S. coal export docks. Nevertheless, it doesn’t appear that China is looking to natural gas as its bridge to a clean energy future, as it has backed away from ambitious shale gas production targets.

On the Climate Solutions blog: Ross Macfarlane describes how falling global demand for coal makes it harder for coal exports from the Northwest to Asia to pencil out; Ben Serrurier posts on Washington Governor Jay Inslee’s carbon reduction taskforce recommendations; and Seth Zuckerman explains that because we are all connected to the same grid that uses all available green electrons, we all consume fossil fuel equally at the margin.