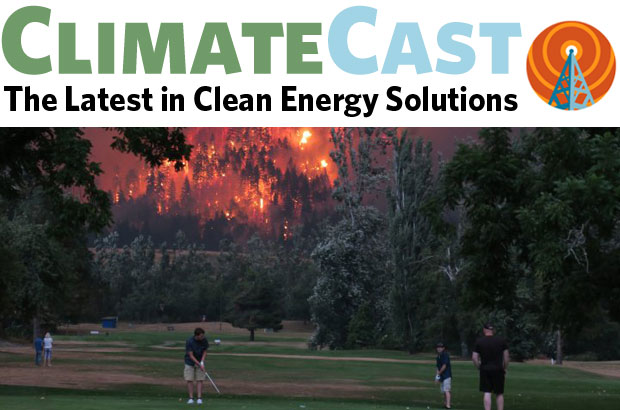 In the wake of Hurricane Harvey, Pope Francis called upon leaders and officials still denying climate change to open their eyes, saying that leaders have “a moral responsibility to act.” In Florida, the US state hit hardest by Hurricane Irma, GOP leaders are in stitches over EPA Chief Scott Pruitt’s position that now is not the time to talk climate.  With 500-year storms occurring now once every few years, racking up billions of dollars in damages, there’s an obvious need to develop a system to deal with these escalating damages. An increasing number of major news outlets are making the connection between climate change and the massive wildfires in the West, including ABC News, Washington Post, New York Times, Atlantic, the New Yorker, and LA Times, More large corporations are choosing climate science over climate silence; a new report shows that some 1,200 of the world’s largest corporations, from Disney to General Motors, are moving toward embracing a carbon price.

A new settlement likely means that the Colstrip coal-fired power plant in Montana will close a full two full decades ahead of schedule. Thanks to the agreement involving Puget Sound Energy in Washington State, customers of several utilities in Washington and Oregon will eventually have a cleaner electricity mix. This news comes on the heels of another Montana announcement: in just one year, the state quadrupled its solar capacity. The solar industry already employs more people than coal, and is likely to grow. In other solar news, a new report shows that some of the most rural and conservative parts of the country are where solar adoption is growing most rapidly. In wind news, Tesla and Vestas have teamed up to explore combining wind power and batteries. In a largely symbolic move, France unveiled a new law to completely ban all production and exploration of oil and fracked gas on its mainland and overseas territories. To this, we say comme il faut (as it should be).

Some of the places recently devastated by Hurricane Irma are now in the path of a new storm, Hurricane Maria. Maria grew to a category three hurricane on Monday, with forecasters warning it may grow stronger still. Irma cut power to nearly two million customers in South Florida; full power restoration may take several weeks. Solar power has helped some homes and city traffic lights maintain electricity, illustrating the important role renewable energy can play in climate resilience as well as in mitigation. Texans continue to feel the effects of Hurricane Harvey, and the full ramifications of the storm are not yet known. Thirteen of the state’s 41 toxic superfund sites flooded during the storm, and three large tanks at a former waste processing plant contaminated with cancer-causing chemicals have spilled into nearby Vince Bayou. The EPA denied evidence of a spill, despite public accounts and photos to the contrary. Scientists are now more confident in linking these storms’ intensity, longevity and frequency to climate change.

While the West burns…

US wildfires this year have now burned an area the size of Maryland, and this unusually tough year is expected become the norm and even grow. Record-breaking heat throughout the West helped fuel conditions for major fires. As wildfire smoke rolled into urban areas unaccustomed to its presence, many wondered just how the smoke would affect their lungs. “The precipitous drop in air quality, a run on face masks and widespread event cancellations may become more commonplace,” writes The Oregonian. While no individual fire can definitively be linked to climate disruption, scientists now agree that climate change sets the stage for stronger, longer burning fires.

This week saw both steps forward and backward in the U.S. In the midst of coast-to-coast climate disasters, Trump has selected yet another climate denier for a post in the EPA -- a lawyer who has represented Big Oil and manufacturing firms. Despite the administration’s continued work to maintain the fossil fuel economy, more jurisdictions are increasingly seeing that the risks are not worth the reward. Minnesota no longer plans to pursue a tar sands pipeline project for this very reason. As part of a company fraud investigation, courts ruled that Exxon must now hand over records it had previously tried to claim were protected; the court refused to even hear their arguments. Notwithstanding these moves forward, progress towards clean energy remains fragile; this weekend the California State Legislature narrowly failed to approve a bill that would have set the state on the path to 100 percent clean energy, despite the state’s position as a national leader in renewable power; objections from skittish utilities and from electrical workers concerned about employment transition contributed to the bill’s failure.

The United Nations Framework on Climate Change is hosting its second annual summit in Agadir, Morocco, with California representing the United States. These talks will lay the foundation for upcoming climate talks this November in Bonn, Germany. Recent climate disasters have only increased the urgency of these discussions; ministers from island nations most affected by back-to-back storms are expected to sharpen their demands. Over the weekend, the White House issued mixed messages on the terms of the United States’ withdrawal, or not, from the Paris Climate Agreement, leading to worries that Europe may water down components of the agreement in order to win Trump’s support. A Senate committee did vote to contribute $10 million to the UN climate change agency, perhaps setting the stage for a more productive discussion when the broader group meets later this fall.

We commonly refer to climate impacts; the harms inflicted in different arenas by a warming climate. But what do those look like? How are they unfolding throughout the world? It is sobering to take a moment to catalog just a few ways in which communities across the globe are suffering today the effects of climate change. From the most recent headlines alone:

In Brief: So who’s to blame?

A new study found that nearly two-thirds of greenhouse gas emissions have come from just 90 companies. A related report shows that 35 of the 50 most influential companies are actively lobbying against climate policy, while 15 are pushing for an ambitious climate policy agenda. Check out the lists to see where your favorite companies stand.