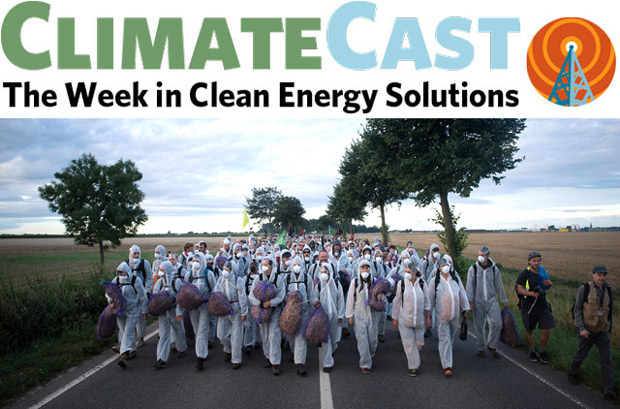 How low can you go: price of solar does the limbo

The price of rooftop solar fell by 9 to 21 percent in 2014, depending on the sector, according to an annual report released last week by Lawrence Berkeley Laboratory, and statistical analysis suggests the price will keep declining. To determine whether you can take advantage of those lower prices, Google has debuted an online tool—Sunroof—that uses satellite data to figure out whether solar is feasible on your roof. Seeing the momentum of solar, some Rocky Mountain and Midwest utilities have tried to stick solar customers with a surcharge, with mixed success. Facing a 650 MW power deficit, Zambia’s utility is planning 1,200 MW of PVs to meet its load.

California re-imagines how the grid can operate

Small-scale energy resources could play a bigger role in California’s electricity markets, under a proposal floated last week by a progressive utility commissioner. The plan envisions how a spectrum of “integrated demand-side resources,” from automated thermostats to smart EV chargers, could keep power supply and load in instantaneous balance, particularly as utilities rely more heavily on fluctuating solar and wind generation. Commissioners have already allowed firms to assemble portfolios of decentralized resources and market them to power dispatchers, and a consortium is working out a common language so utility operators can communicate with battery storage that is wired to the grid.

2015 on track for hottest year, as July breaks records

Last month was the hottest July on record, NASA announced, putting 2015 on track to steal 2014’s crown as hottest year in history. Adding to its chances is a vigorous El Niño pattern in the Pacific, which shows similar strength to 1997-98’s powerful El Niño, a phenomenon explained artfully in Vox. Warm ocean waters have also fed a toxic Pacific algae bloom, while peer-reviewed science linked climate change to the flooding that inundated Texas in May. The Middle East baked under a persistent heat wave that killed nearly 100 Egyptians; scientists debated Jim Hansen’s paper predicting drastic sea-level rise; and Mt. Rainier loosed a torrent of glacial melt-waters.

Resistance to fossil fuel development broke out in Germany last weekend, as 1,000 demonstrators swarmed a mine and blocked work by mammoth digging machines that scrape brown coal from the surface. Protesting under the slogan Ende Gelände—here and no further—240 were arrested and released. In the Pacific Northwest, Sightline compiled a snapshot of coal and oil export projects delayed or cancelled due to public opposition; in Toronto, a parliamentary candidate sparked a firestorm by suggesting Albertan tar sands must stay in the ground to forestall dangerous levels of global warming; and Alberta’s new government set out to develop effective new climate policies.

Cheap oil leads to rebound in gasoline use

Even at prices below half the 2013 peak, oil supply continues to outstrip demand by some 3 million barrels a day worldwide, according to the International Energy Agency. The continued oversupply casts doubt on the success of the presumed Saudi strategy to reduce world production by driving prices below its competitors’ break-even point. The low prices have inflicted hardship on Texas oil country and the Alberta tar sands, with the climate sustaining collateral damage. Recent hikes in US demand for gasoline—prompted by economic recovery and low prices—have caused climate pollution from gasoline to increase every year since 2012, after falling for five straight years.

A tally of industrialized nations’ pledges shows an aggregate commitment to cut climate pollution 26 to 30 percent below 2010 levels by 2030, well short of the halving necessary if humanity is to keep global warming under 2˚C. The final bid came from Australia, whose weak pledge would leave its per capita emissions the highest in the developed world. In a challenge to rich nations, Djibouti offered to cut its emissions 40 percent, and said it would deepen that cut to 60 percent if it received aid from the Green Climate Fund. Cheerleading these efforts is Christina Figueres, who is described in a New Yorker profile as having the highest ratio of responsibility to authority of any functionary.

Last week saw three separate studies bullish on wind’s capacity to dominate U.S. electricity markets. Wind’s 53 percent capacity factor (CF) already exceeds that of natural gas (48%), according to the National Renewable Energy Laboratory, and imminent improvements will boost its CF to 65%, besting coal (61%), with “transformative” implications. A Lawrence Berkeley National Laboratory report revealed rapid growth in the industry at the lowest cost ever (2.35 cents per kWh), below the average wholesale price of electricity in much of the country, as taller and larger wind turbines boost output. The distributed wind energy market reached a gigawatt of installed capacity, according to research from the Pacific Northwest National Laboratory.