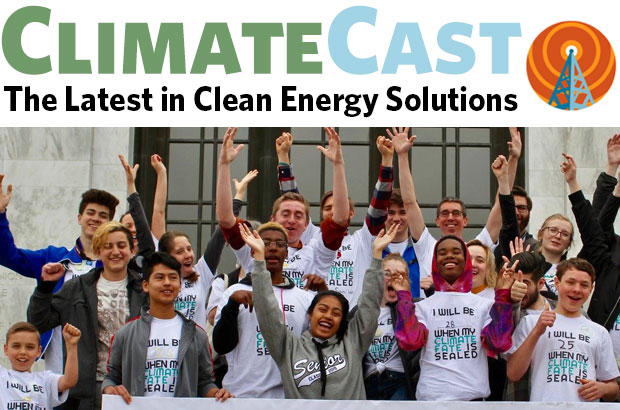 This Friday—3 days before the international Climate Action Summit opens at the United Nations in New York—millions of people across the globe will walk out of their classrooms and places of work to demand action on the climate crisis. Young climate strikers have already been leaving their classrooms around the world each Friday as part of the “Fridays For Future” movement; on September 20 adults will join them in what may very well be the largest climate protest ever. The bold youth leadership behind these rallies is striking, if not surprising: a recent survey shows that about one in four American teens have already taken action on climate. This Friday, people in more than 150 countries are participating, as well as major companies like Ben & Jerry’s, Lush Cosmetics, and unions/trade groups, faith groups, and even entire school districts. Amazon employees in Seattle will walk off the job to participate in the global strike and protest their employer’s inaction on climate change. There are at least 28 strikes planned throughout Oregon, and 26 planned in Washington. Click here to find a climate strike near you. Can’t participate this Friday? Check out this helpful list from the Union of Concerned Scientists for information on different ways to take part..

Earlier this month, the climate change issue finally got some serious discussion from presidental candidates. CNN facilitated a climate crisis town hall, spending seven hours interviewing candidates about their policy plans to deal with the climate crisis. While the candidates proposed a variety of solutions, they all agreed that transitioning to a clean energy economy by mid-century was of the utmost importance. Top takeaways from the climate crisis town hall can be found here. Last week, the Democratic National Committee hosted the third presidential debate, at which climate policy made a small but meaningful cameo.

Coal and gas: closer to becoming a thing of the past

Coming on the heels of Berkeley, CA’s recent decision to keep fracked gas out of new construction, The City of Seattle is considering its own plans concerning how we heat our homes and  buildings. The Healthy Homes, Healthy Buildings proposal would guarantee that all newly constructed homes and buildings run on clean electricity, not fossil fuels.20, 2020. Officials in Minneapolis are also looking for ways to drastically cut natural gas use. Citywide natural gas use rose last year and accounts for the city’s top source of greenhouse gas emissions. A new study highlights why cutting natural gas will be good for our wallets too: by 2035, it will be more expensive to run 90% of gas plants being proposed in the U.S. than it will be to build new wind and solar. The study projects that this change will happen so quickly that gas plants being planned now will become uneconomical before their owners can finish paying for them.

And when it comes to coal, plant closure is already proving to be good for the bottom line. A new analysis by Oregon-based utility, PacifiCorp, showed that at least a half-billion dollars could be saved through early coal plant closures. Closing coal is boosting the economy in other ways too; a new study finds that burning less coal means less public health costs that come from populations suffering from the health impacts of particulate pollution. But as coal operations shutter without any sort of just transition plan in place, coal companies are leaving behind a wake of damage in the communities they once served—workers without jobs or healthcare, taxes unpaid, and abandoned worksites with no clean-up plan. Wyoming Senate President, Drew Perkins has formed the first legislative subcommittee to hold coal companies accountable and to secure financial obligations from them, even after they declare bankruptcy.

Dorian’s aftermath and the new normal of hurricanes

Hurricane Dorian stands today as one of the strongest, longest-lasting hurricanes on record in the Atlantic. But that distinction may be short lived, as climate change contributes to hurricanes stalling over coastal areas, bringing extreme rainfall, slower winds, and increasing in strength overall. The National Oceanic and Atmospheric Administration reports that the oceans have absorbed over 90% of the Earth’s warming over the last half century. Warm waters provide heat and moisture to fuel hurricanes, meaning that we can expect more frequent and stronger hurricanes in the future. While the U.S. was largely spared Dorian’s destruction, thousands have been evacuated from Grand Bahama, while thousands more remain missing or on the island without food, running water or electricity. Many individuals are still missing from low-lying shantytowns where structures were completely flattened by the storm. Hurricane Dorian’s devastation of the most impoverished areas of the Bahamas is an example of how climate change hits vulnerable populations first and worst.

The blob is back. Beware

Scientists have detected a marine heatwave off of the West Coast, stretching from California all the way to Alaska. The heat wave is reminiscent of the 2014-2015 ocean “blob” that ravaged salmon runs, seabirds and other marine life. This newly detected blob poses an equally grave threat to salmon and sea life, and may create toxic algae blooms that poison shellfish and force marine life to search for cooler waters. Impacted areas are currently between 5 and 7 degrees above average and span over four million square miles. It is the second largest such occurrence ever recorded in over 40 years. The 2015 blob was blamed for bringing drought to the west coast and heavy snow to the east coast. Some meteorologists project that we could see a repeat of that situation, with the first 200 miles from the western North America coast being the most impacted.

In Brief: AAA gets an “F” on climate

The same AAA that you call for a lifeline when your car breaks down doesn’t extend that lifeline to the climate emergency we’re currently experiencing. Climate Solutions’ Meredith Connolly explains that AAA of Oregon has actively lobbied against state climate policies in Oregon. In fact, the group sued the State of Oregon to block electric vehicle rebates as well as more circumstantial evidence pointing to AAA’s broader anti-environment efforts. On both national and state levels, AAA has been called out for its anti-environmental playbook – an alternative roadside assistance company was established in Portland, largely in response to AAA’s history of anti-environmental antics.