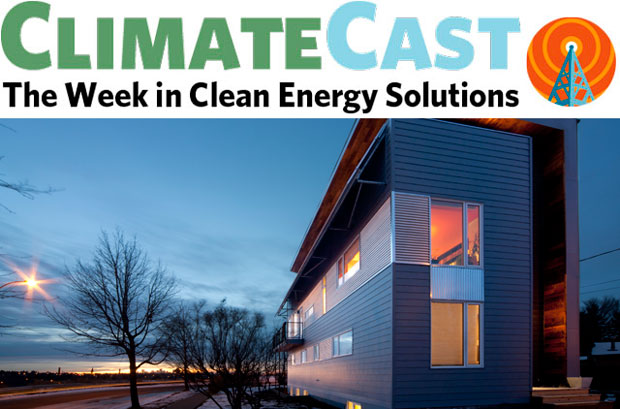 What did Exxon know and when did they know it?

Exxon scientists briefed top company brass in the late 1970s about how fossil fuels change the climate, according to an investigation by Inside Climate News. Exxon’s executives were told there was a window of just five to ten years to address the problem; instead, by the late 1980s the oil giant began funding climate denial. The report includes a video interview with an ex-Exxon scientist, juxtaposed with footage of his research aboard a company supertanker three decades ago, and demonstrates how the company has put profit ahead of corporate responsibility much like the tobacco industry—a similarity captured in this compelling ad dismissing opposition to Oregon’s clean fuels standard.

Volkswagen admitted last week that it had designed its diesel cars—whose fuel economy is 20 to 35 percent better than gas models—to cheat on smog tests. Since 2009, VW has equipped diesels with software that operates the engine to produce less nitrogen oxides when cars are undergoing tests—a shift that would have degraded the cars’ performance on the road. News was brighter for other carbon-saving transportation: a wind-powered hydrogen fueling station opened in Yorkshire; more than one of every six cars sold in Norway last month is electric, and California’s new climate legislation turns out to boost EVs and drive down oil use despite oil industry opposition.

Nations partner on climate, set goals, and miss them

Sweden set a goal last week of weaning itself completely from fossil fuels, and along the way plans to cut its climate pollution 40 percent by 2020. Germany acknowledged last week that it will probably miss its identical 2020 target by about 7 percentage points, likely due to its reliance on brown coal and the weakness of the EU emissions trading system. In the US, an impending visit from the Chinese president provoked a burst of new climate commitments by the two nations, including technical collaboration on utility innovation and city-level pledges to peak carbon emissions sooner—evidence of China’s climate action that GOP presidential candidates seem determined to ignore.

Pledges better than business-as-usual, but not enough

Hopes for a strong outcome to December’s Paris summit were buoyed last week when the EU agreed on its final negotiating position, which calls for worldwide climate neutrality in the second half of this century and a possible tightening of national commitments every five years. The EU stance, which garnered support even from coal-dependent Poland, came as a tally of climate pledges showed that promised cuts would allow for a 3˚C rise in temperatures, which the indomitable UN climate diplomat Christina Figueres called a “substantial departure from business as usual” but still unacceptable. Another linchpin of a climate pact—clean-energy development assistance—sounds good but lacks teeth, according to Brown University researchers.

Who knows where oil prices will go?

Petroleum analysts issued wildly disparate forecasts about the price of crude oil last week. OPEC predicted the price will rebound to $80 a barrel by the end of the decade, while Goldman Sachs projected it could drop as low as $20, if it weren’t for the cushion provided by Chinese purchases of oil to fill its strategic reserve. Meanwhile, Shell’s CEO said that if its Arctic exploration efforts fail to find the predicted undersea reservoirs of oil this year, it will probably be “the end of the road” for its drilling there. Shell’s Arctic antics contributed to its recent ouster from the Prince of Wales Corporate Leaders Group on climate.

Longshoremen in the San Francisco Bay Area voted last week to oppose plans to ship coal out of the Port of Oakland, even though the two union locals stand to gain more work if coal were shipped through the port. In British Columbia, the Lax Kw’alaams First Nation signaled it will file an aboriginal land claim to an island and adjacent waters where a Malaysian firm is proposing an $11 billion liquefied natural gas terminal. From even farther north, Gwich’in natives of Alaska’s North Slope traveled to Congress to lobby for wilderness designation for the coastal plain of the Arctic National Wildlife Refuge, also the target for oil exploration.

North America lags behind Europe in the construction of passive houses, but the movement is gathering steam. Despite a schism between two groups of practitioners, it has even yielded a 57-unit affordable housing complex near Portland, OR that is so well insulated it seemed air-conditioned in a 100-degree heat wave. For homeowners who are lowering their carbon footprint by producing their own energy, California’s new net metering rules may expose rooftop solar income to taxation. Installers of rooftop solar are struggling with high marketing costs that average 49 cents per watt, or two-thirds as much as the panels themselves, and are resorting to online marketing in order to reduce them.

Image: A near-net-zero home in Saskatchewan, Canada, inspired by the Passivehaus movement. Photo by Darren Greenwood via Flickr.