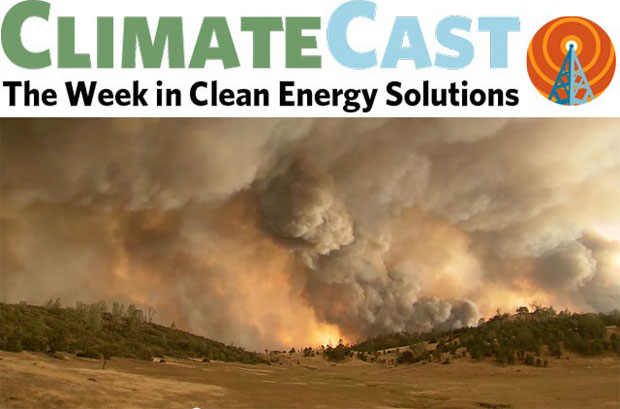 U.S. electric power will produce 32 percent less climate pollution by 2030, according to rules announced yesterday by President Obama and promoted in a highly produced video. Compared with last year’s draft, the final rules require slightly deeper cuts in carbon emissions, provide a greater push toward renewables and nuclear power, and are expected to do less to boost fossil gas. One thing is certain: the rules will be bad for coal, and by coincidence, the second-largest U.S. coal producer, Alpha Natural Resources, filed for bankruptcy the same day. Some hailed Obama’s plan for its broad scope, while others were disappointed at how little extra carbon reduction it would require. Fossil fuelists plotted against the rule package and urged states to defy the rules in “interstate compacts,” even though a new study found the package will save Americans $41 billion annually.

Stymied by the legislature’s failure to pass a climate package, Washington Gov. Jay Inslee last week directed the Department of Ecology to design a policy he can order through executive action to achieve the 50 percent cut in carbon emissions by 2050 already on the books. His approach drew praise from Joe Talton, who offered five ways to view the governor’s action. KC Golden noted that a cap is only part of the solution and should include provisions for workers in a clean energy transition and reduce the influence fossil fuel interests currently wield over the democratic process.

Salmon, forests succumbing due to warming

A quarter-million Columbia River salmon have succumbed to warmer waters and lower flows, fishery officials announced last week. In California, widespread wildfires led Gov. Jerry Brown to declare a state of emergency, and conflagrations across the West are ahead of what’s usual for this time of year—continuing a long-term increase in number and extent. Global temperatures have already risen by about 1˚C, according to The New Scientist, and spring now arrives in New York State two weeks sooner than in the 1800s. Such impacts fuel the dystopic but hopeful musings of author Margaret Atwood and a comparison of our climate predicament with that of 20th century whales.

Protestors dangling from a bridge scored a symbolic victory last week when they turned back the icebreaker Fennica as it attempted to leave Portland after repairs, bound for Shell’s Arctic oil drilling grounds. Ten hours later, the Coast Guard had forced the activists from their perches over the Willamette River. By coincidence, Shell’s drilling rigs began work that same day, but can’t go deep until the Fennica arrives. Shell is persisting in Arctic exploration despite a quarter that saw its profits drop sharply, a problem afflicting its peers as well. Low prices have forced oil firms to cancel $200 billion in new projects, double previous estimates.

Investor-owned utilities want to slash payments to Ohioans with rooftop solar arrays; a New Hampshire electric co-op set a fair solar tariff even after reaching the state-imposed cap on net metering; and SolarCity will offer PV arrays to small businesses who will pay for them on their property tax bills. The three examples demonstrate how much the growth in solar power depends on a favorable framework of rules and rates. Partisans of utility-scale solar released a study last month claiming their approach to photovoltaics is more economical than rooftop installations, but other analysts questioned their assumptions and noted that the study ignored several benefits of distributed solar.

Candidates spar on climate as 2016 race warms up

Critics savaged Hillary Clinton’s climate plan last week for what she left out: clear stances on Arctic drilling, fracking, and the Keystone XL pipeline, and compared her unfavorably to other Dems. She dodged a direct question on Keystone, even as Alberta’s provincial government quit lobbying for the project. Her campaign pilloried GOP candidates in mock horror film footage as mad climate deniers, while Jeb Bush stuck to decade-old Republican talking points that ignore climate and focus on technology and innovation. It’s a common meme among Republicans because renewables are universally popular, but David Roberts argues that Democrats are ill-served to let the agenda shift from climate to clean energy.

Paving the way to cleaner transport

United Parcel Service will buy as much as 46 million gallons of renewable diesel over the next three years, aiming to displace 12 percent of its fuel needs by 2017. Elsewhere on the off-ramp from petroleum, an electric street bike debuted with a 140-mile range and 110-mph top speed, and San Francisco may build the world’s largest hydrogen-distribution station, to supply fuel-cell-powered ferry boats, cars, buses, and fleet vehicles. These developments are music to the ears of California Air Resources Board Chair Mary Nichols, a potent advocate of electric-drive zero-emission vehicles. She has an ally in Tesla, which promotes more stringent fuel economy standards, and whose EV production earns it millions in saleable CAFE compliance credits.