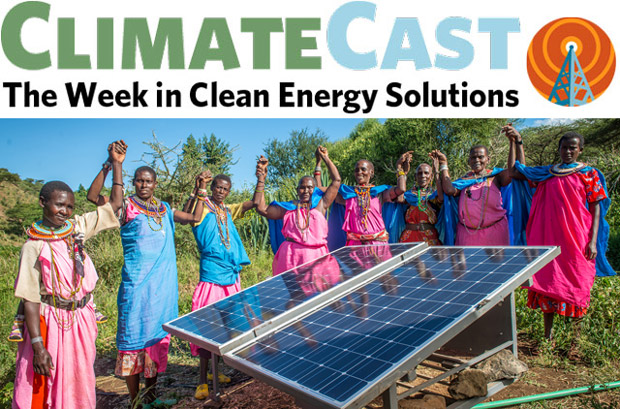 Africa can leapfrog over fossil fuels and rely mainly on renewables to bring electricity to the two-thirds of its population that lacks it, according to a new report from the Africa Progress Panel led by former UN Secretary-General Kofi Annan. “We categorically reject the idea that Africa has to choose between growth and low-carbon development,” Annan said. The high prices that most Africans pay for lighting make solar power especially attractive, which stimulates the market for over 200 Maasai women who sell off-grid solar installations in the Kenyan bush. Meanwhile, in Mali, Senegalese-American pop singer Akon is underwriting a “solar academy” to train workers for the field.

Leaders of the G7 nations on Monday endorsed deep cuts in worldwide fossil fuel use, but stopped short of backing an exact percentage reduction by 2050. The announcement came amid reports that five of the G7—Britain, France, Germany, Italy, and Japan—between them burned 16 percent more coal in 2013 than in 2009. Japan last week pledged to cut carbon emissions 26 percent from 2013 levels by 2030, but critics said the plan presumes the unlikely reopening of Japan’s nuclear fleet. With a global climate treaty still elusive, economists floated the idea of a tariff that carbon-capping countries could impose on goods from nations that don’t adopt those limits.

Although fossil gas can reduce carbon pollution by displacing coal-fired electricity, says a new study from the Stockholm Environment Institute, methane leakage can cut those climate benefits in half because of that gas’s potent heat-trapping power. Other factors affect the climate benefits of fossil gas, too, such as whether the gas arrives by pipeline (good) or in LNG tankers (bad), and whether fossil gas’s growth is accompanied by carbon-limiting policies in the overall economy. The lower carbon intensity of fossil gas means that a carbon tax would shift energy consumption from coal to gas, says a study published in Nature, helping account for oil-and-gas firms’ recent support for such a tax.

The hiatus that wasn’t and the impacts that will be

The so-called “hiatus” in anthropogenic global warming in the first decade of this century didn’t actually happen, according to a paper in last week’s Science that re-analyzes land and sea temperatures using new data. Two other new studies find that ocean warming will radically disrupt marine life, and displace ocean creatures from the equator toward the poles in search of cooler water. The terrestrial impacts are piling up, too, with a lethal heat wave in India, flooding in Texas made worse by policies that promote building in disaster-prone areas, and unmistakable shifts in Montana agriculture noted by that state’s Farmers Union.

Republican presidential hopeful Sen. Lindsey Graham garnered attention last weekend by urging action on climate. Although Graham’s record is mixed and his party’s entrenched positions would give him little latitude on climate policy, his stance nevertheless distinguished him from rivals Rick Santorum (who said the Pope shouldn’t opine on climate), Jeb Bush (who huddled with fossil-fuel execs at a Virginia resort), and Rick Perry (who famously forgot in a 2012 debate that Energy was the third cabinet department he wanted to eliminate). But with legislation to curtail renewable energy stumbling even in conservative North Carolina, climate ignorance may not be such a winning strategy within the GOP this election cycle.

Trucks can more than triple their fuel economy with a retrofit of a hybrid powertrain, developed by a former Tesla engineer. He realized that hybrid technology would yield the highest returns in vehicles that use a lot of fuel and stop frequently, so his firm outfits delivery and garbage trucks with hybrid technology for less than half the cost of a new vehicle. In the passenger car arena, Minnesota’s 1.7-million-member Great River Energy Co-op is offering wind energy for the price of regular to all EV owners, and Beijing will exempt EVs from rules banning cars from local freeways on alternate days.

The Norwegian Parliament voted last week to divest its $880 billion sovereign wealth fund from companies that get at least 30 percent of their revenue from coal, a move that will require the sale of $5 to $8.5 billion of the fund’s holdings. Shell’s former chairman argued for a selective approach to fossil fuel divestment last week, such as Georgetown University’s move to strip coal from its $1.5 billion investment portfolio. The opposite strategy, of shareholder engagement, has had a long and ineffective history in confronting the management of ExxonMobil, and earned a scathing critique from Bill McKibben in The Washington Post.