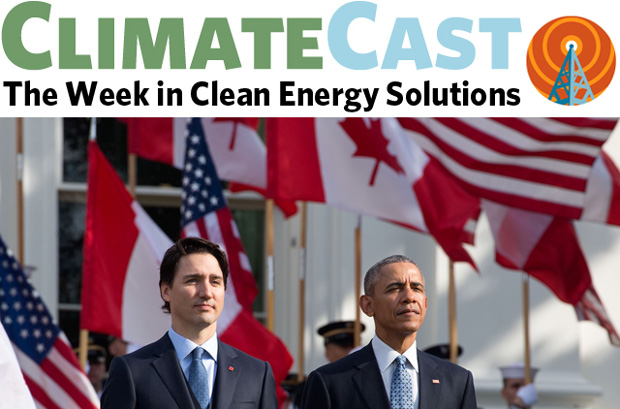 US and Canada unite to fight climate change

In a dramatic turnabout from the days of Bush and Harper, US President Obama and Canadian Prime Minister Trudeau announced an agreement to help lead the transition to a low-carbon economy and spur other nations to ratify the Paris climate accord. The leaders agreed to work with indigenous groups to make science-based decisions to protect the boreal environment and reduce ships’ emissions in the Arctic, but were silent on whether Arctic drilling will be banned. Simultaneously, the EPA announced it will limit methane emissions from new and existing oil and gas facilities, which will help meet targets to reduce methane emissions by 40 to 45 percent below 2012 levels by 2025.

United Airlines last week began powering some of its Los Angeles flights with biofuel made from waste fats and inedible oils, the first carrier to power its regular commercial operations partly with renewable fuel; it will buy 15 million gallons over three years. Initially, the biofuel will be blended at a ratio of 30 percent for San Francisco-bound flights, but then will be mixed into the fuel delivered underground to all United planes, a crucial step in making biofuel use economical. These next-generation biofuels are especially important in light of a new EU report that biodiesel made from soy and palm oil has increased climate pollution by prompting farmers to clear more forest. Eschewing hydrocarbons entirely, Toyota announced a project to use wind power to generate hydrogen for fuel-cell-powered forklifts.

Last month was the hottest February on record worldwide, topping the 1998 record by nearly half a degree Celsius, and exceeding the monthly baseline average by 1.35˚C, a difference that is 0.21˚ greater than any monthly anomaly ever recorded. The Arctic was particularly warm, with large areas at least 18˚F warmer than usual. (The graphs and maps are stunning.) The announcement comes as research published by the National Academies shows that extreme heat waves can be attributed with near-certainty to climate change; a NOAA study links global warming to toxic algae blooms; and paleoclimatic research shows that Antarctic glaciers fluctuated with ancient CO2 levels, raising sea level tens of meters when CO2 levels were just 500 ppm.

Federal energy regulators last week rejected a proposed LNG terminal in southwestern Oregon and turned down permits for the gas pipeline designed to supply it. With coal on the ropes, JPMorgan Chase added loans for OECD coal mines and power plants to its list of “Prohibited Transactions,” and bankrupt Arch Coal abandoned plans to mine in Montana’s Otter Creek. Oregon Gov. Kate Brown signed legislation that will phase out the use of coal for Oregonians’ electricity, and the CEO of Canadian Pacific Railway conceded that fossil fuels are “probably dead.” Shell and Chevron have adopted different rhetoric on climate, with Shell taking a conciliatory tone, and Chevron remaining defiant.

Renewable power generation in 2015 blew past recent predictions by the Energy Information Administration, with utility-scale clean energy growing 2 percent over 2014, instead of falling by 1.8 percent as the government had forecast. Big Solar’s growth is apt to continue, thanks to dropping prices, the ability to lock in predictable energy costs, and the local political constituencies that arise from the spread of solar farms, writes David Roberts. Household PV systems have thrived under net metering, but Arizona and Maine are devising alternatives that would still make rooftop solar economically attractive. In Brooklyn, entrepreneurs are rolling out a radically different approach: neighbors will be able to buy energy from one another, as part of a local microgrid.

Five years after the Fukushima nuclear meltdown, the site still teems with 7,000 workers attempting to contain its radioactive water and debris, while radiation remains hot enough to fry the wiring in robots ferreting out melted fuel rods. A full clean-up is expected to take at least four decades, after a catastrophe whose lessons still affect the management of the US nuclear fleet. In Britain, the projected cost of a new 3.3 GW nuclear plant ballooned from $23 to $26 billion, leading the finance director of plant builder and French energy giant EDF to resign over concerns that the project will be hard to finance. Plants in Georgia and France are struggling with multi-billion-dollar cost overruns as well.

Getting solar to the masses

Spreading the use of decentralized solar power to low- and middle-income people will take concerted effort, according to a new report from the Interstate Renewable Energy Council. Recommendations included on-bill repayment for homeowners, partial ownership of community solar farms by the less affluent, and installations on subsidized housing that cut tenant utility bills. Rhode Islanders of all income levels will soon be able to shop for solar on a utility-sponsored website that points them to independent installers and offers a long-term contract for the power they produce at rates over 30 cents per kWh—well above the 19-cent average retail rate—and even higher if they first take steps to improve their energy efficiency.