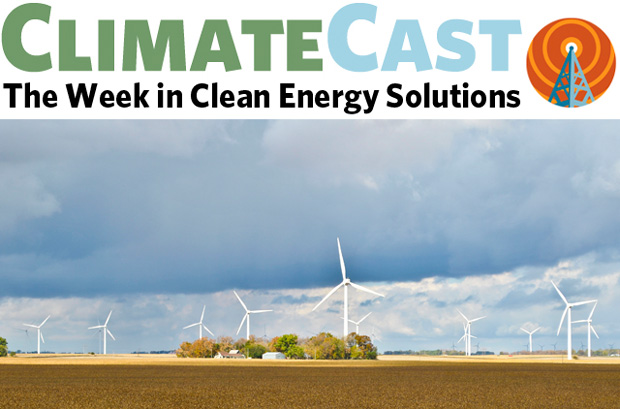 Norway’s $860 billion sovereign wealth fund named 52 companies last week that it banished from its investment portfolio because they draw at least 30 percent of their revenues from coal, a list that includes American Electric Power, Tata Power, and the now-bankrupt Peabody Energy. Yale University took a baby step toward divestment, selling its holdings in two oil sands firms and one coal company. Banks are coming under scrutiny as well, with EU regulators proposing a “stress test” for banks’ exposure to climate and energy market risks, and Wells Fargo left holding the bag with the largest US portfolio of loans in the oil and gas sector. The Royal Bank of Scotland is leaving fossil fuel behind: it cut its oil and gas exposure by 70 percent while doubling its clean energy lending.

Mr. Peabody’s coal train is out of cash

Peabody Energy, the world’s largest private coal company, collapsed into long-awaited bankruptcy last week, and post-mortem analysis swarmed over it as thick as flies on any other carcass. Peabody couldn’t service the $4 billion debt it took on to acquire an Australian coal concern, as Asian demand cooled and coal prices plummeted. But it isn’t alone in its troubles: nearly three-quarters of the coal in Wyoming—and 44 percent of US coal—is mined by bankrupt companies. The transition off coal continues, with four Midwestern utilities closing 2,000 MW of coal plants last week alone, and the UK’s solar generation exceeding its coal power for a full day earlier this month.

First Solar has cut its cost of producing thin-film photovoltaic panels to 40 cents per watt—less than the leading Chinese manufacturer’s competing crystalline PVs—and foresees further reductions as it adapts techniques developed to manufacture flat-screen TVs. Such gains will be needed to keep solar power competitive, says a paper in Nature Energy, which predicts solar will become less valuable per kilowatt-hour the more of it is on the grid. Not in dispute: the value of clean energy to local economies. Wind farms pay rural landowners $222 million annually in lease payments and royalties. More is on the way, with Iowa-based MidAmerican Energy investing $3.6 billion in wind energy to become 85 percent renewably powered.

Hillary Clinton and Bernie Sanders tangled over tackling climate change in their debate Thursday, with Sanders touting his proposal to ban fracking nationwide, and Clinton advocating a continued role for natural gas as a “bridge fuel” to wean the economy from coal and save Western Europe from dependence on Russia. Sanders cited the role of industry lobbyists in bundling contributions to Clinton’s campaign, a link whose importance David Roberts minimizes in Vox. Sanders’ climate policy is stronger on taxing carbon, keeping fossil fuels in the ground, and reducing the influence of the fossil fuel lobbies, says Brown University Prof. Timmons Roberts. The debate highlighted both candidates’ weak points on climate, says The Atlantic.

US raises estimate of methane pollution

The EPA upped its estimate of US methane emissions by more than 10 percent when it released the 2014 greenhouse gas inventory last week and restated prior figures based on more precise measurements of atmospheric methane. US emissions rose 1 percent in 2014, which EPA ascribes to colder weather, leaving US climate pollution 9 percent below 2005 levels. The agency attributed the methane revisions to the oil and gas sector, which account for one-third of the nation’s methane emissions, and which President Obama and Canadian Prime Minister Justin Trudeau have agreed to cut nearly in half by 2025. Atmospheric methane levels plateaued in the early 2000s, but resumed their steep increase in 2006, coincident with the rise of fracking.

The mercury in India approached 120˚F and led to dozens of deaths, much earlier in the year than such hot temperatures are common, and more than 12 percent of Greenland glaciers were covered in melt-water, nearly a month sooner than such melting has ever been recorded. These observations come on the heels of data showing March was the latest in a string of months that have broken global average temperature records. Houston suffered severe flooding—a phenomenon predicted to become more frequent in a warming world—which led one reporter to break the fourth wall and help rescue a motorist from his submerging car.

In brief: Of blackout blackmail and climate deniers

Criticism emerged of a California report that warned of blackouts this summer if a crippled natural gas storage field at Aliso Canyon isn’t brought back online. Consumer activists and utility watchdogs suggested that options other than reactivating the field had been given short shrift, though critics agreed with 17 other recommendations in the report. And “Science Guy” Bill Nye invites climate denial lobbyist Marc Morano to switch sides and endorse climate science in this entertaining three-minute video.

Image: Wind turbines in a Minnesota field. Photo by MPCA, via Flickr.